The list represents “the best of Asia-Pacific’s big companies.”

Eight of the biggest listed corporations in the country have landed on Forbes Asia’s Best Over A Billion 2019 list, which features 200 top-performing companies in the Asia-Pacific region with sales revenues exceeding one billion US dollars from the previous year. 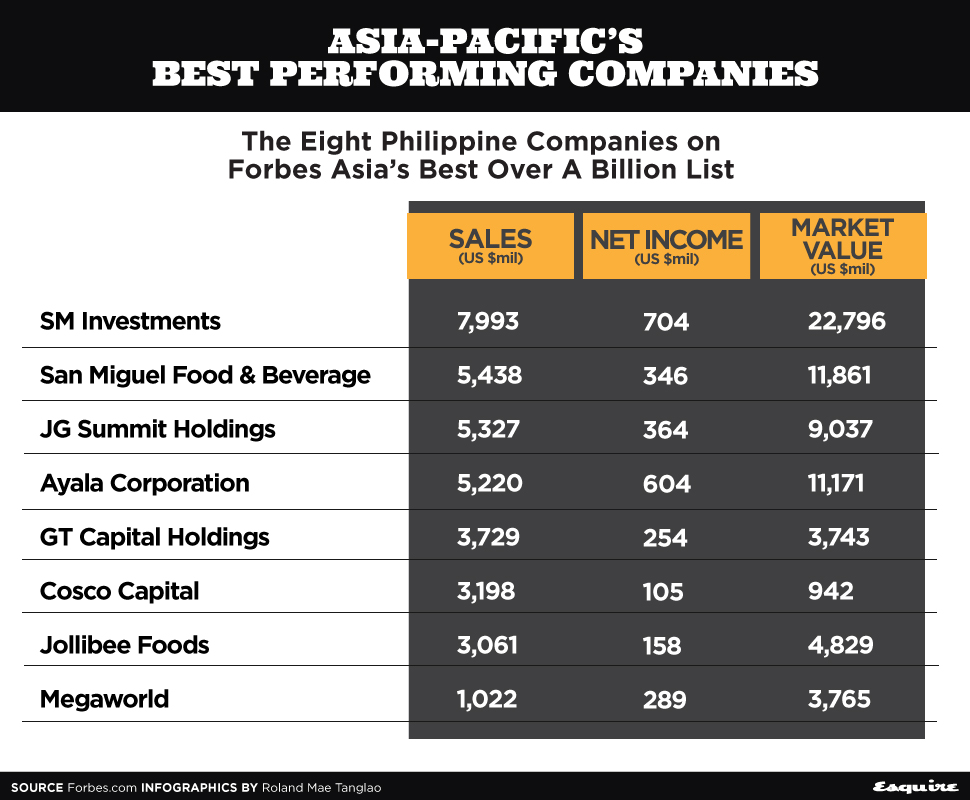 SM Investments, Ayala Corporation, and JG Summit Holdings are no strangers to Forbes. Earlier this year, the three companies were among only six Philippine companies to land on Forbes’ Global 2000 2019, an annual list that ranks the largest public companies in the global economy.

The Forbes team behind the Best Over A Billion list started off with a pool of 3,200 listed companies in the region that earned over $1 billion in revenues in 2018. Companies losing profit with declining sales, governance and legal problems, and debt greater than half their capital were crossed off the list. Forbes further filtered the selection of companies by including only those that saw impressive five-year sales, operating income growth, return on capital, and projected two-year growth.

The last ones standing represent, in Forbes' view, “the best of Asia-Pacific’s big companies.”

The American business magazine also noted how many billionaires in the region are linked to the companies on the Best Over A Billion List: “Nearly about two-thirds of the companies on this list are controlled or connected to families or individuals who have appeared on Forbes Asia rich lists.”

In the Philippines alone, the heads of JG Summit Holdings, Jollibee, San Miguel Food and Beverage, Megaworld, and SM Investments made it to the Forbes Billionaires list, which discloses the richest people in the world.

Financial Adviser: 5 Reasons Why AyalaLand Logistics Holdings Gained as Much as 82% This Year Amid Persistent Market Uncertainties