These Are the Richest and Poorest Senators of the Philippines 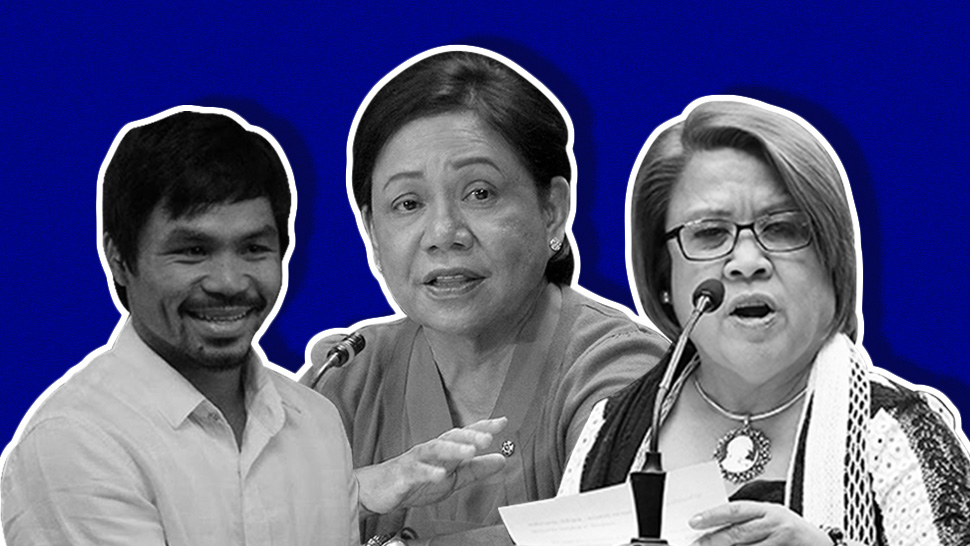 Based on the latest statement of assets, liabilities, and net worth (SALNs) released by the Senate of the Philippines, Senator Cynthia Villar continues to hold on to the top spot of wealthiest senators in the Philippines.

According to her latest declared SALN, as of June 30, 2019, Villar’s net worth is currently at P3.5 billion, making her the richest Philippine senator, after the second richest senator, Manny Pacquiao, whose declared net worth is posted at P3 billion.

For seven years running, Villar has been the richest senator since she assumed office in 2013. Villar’s husband and former senator Manuel Villar is currently the richest man in the Philippines, according to Forbes.

Pacquiao has followed close behind as the second richest senator since 2016, when he was elected into office. The two are the only billionaires currently serving as senators. Villar's wealth stems from her family's billion-dollar property and housing businesses, while Pacquiao amassed his wealth largely from his career as a professional boxer.

Meanwhile, the “poorest” senators based on their declared SALNs are Senators Leila de Lima, Christopher “Bong” Go, and Risa Hontiveros. De Lima’s declared net worth is posted at P7.7 million, the lowest of all sitting senators; Go’s net worth is declared to be P15.5 million; while Hontiveros’ net worth is P15.6 million.

The updated SALNs, most of which are dated June or July of this year, come from the 12 newly elected and senators of the 2019 midterm elections. The SALNs of the remaining 12 senators who were elected in 2016 are still dated December 2018. 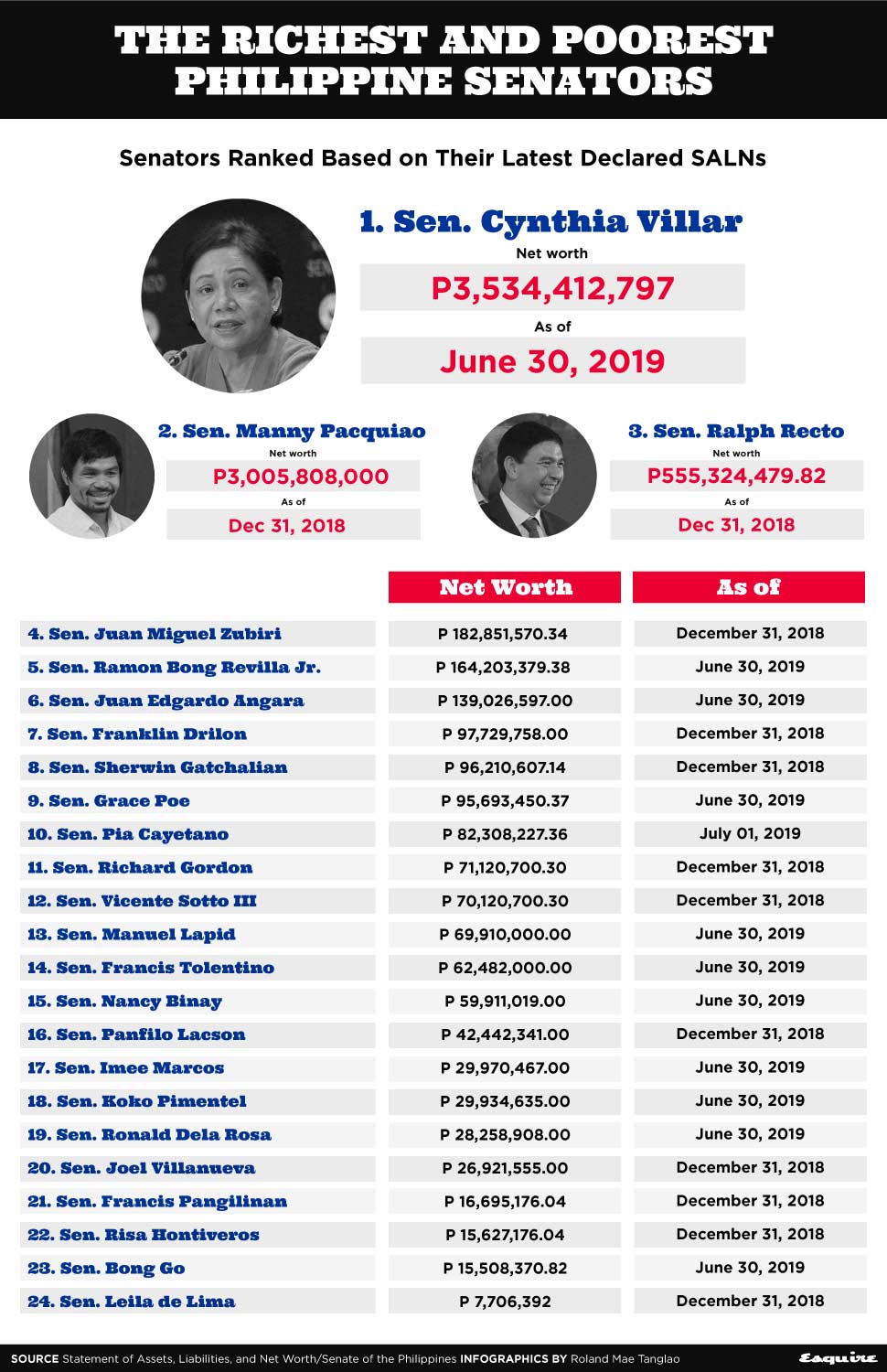 Despite being among the senators with the lowest net worth, Go spent the most during the 2019 General Elections, according to the Statements of Contributions and Expenditures (SOCEs) released by the Commission on Elections last June.

After Go, Tolentino Poe spent the most during the elections with P159 million and P156 million in expenditures, respectively. Villar, currently ranked the richest senator in office, did not receive any contributions, despite spending P135 million during the campaigns. The amount is suspected to have come out of her own pocket 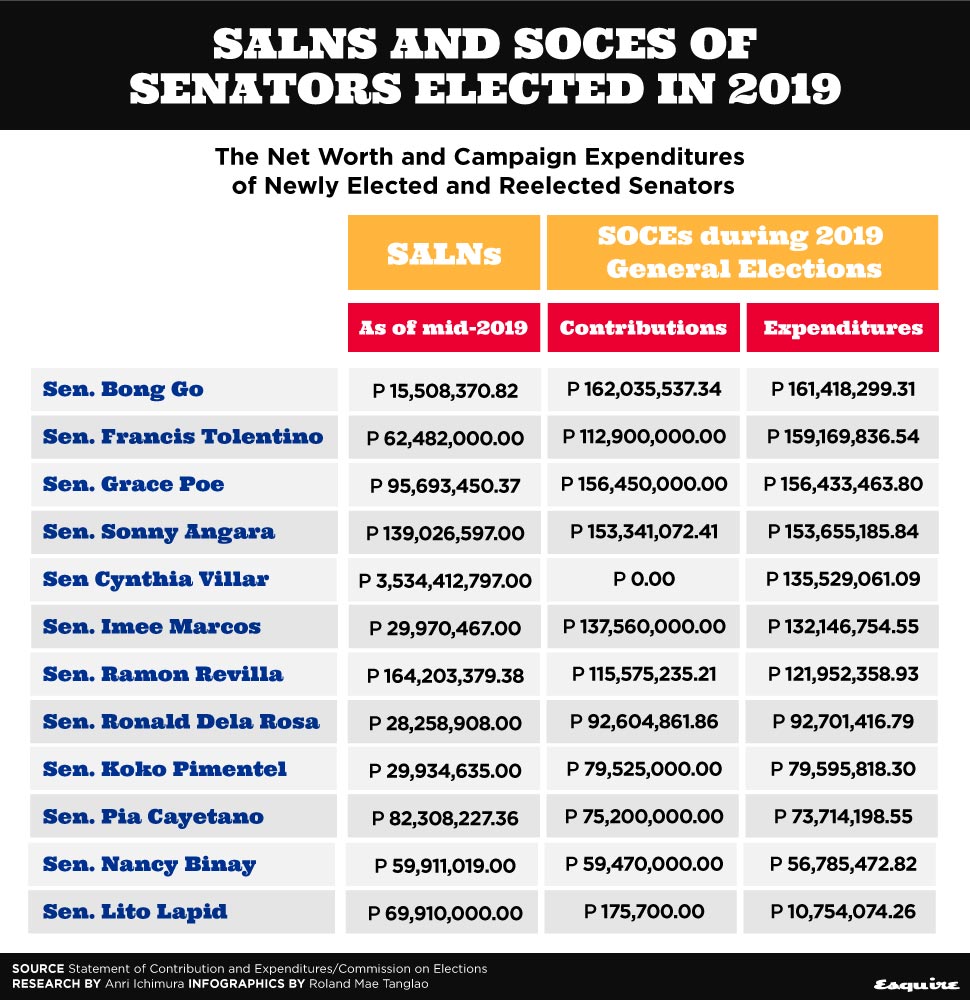 However, the of the elected senators in the 2019 elections show a disparity between the declared expenditures of the candidates and reports from the Philippine Center for Investigative Journalism, an independent poll watcher and media organization, which claims that some senators spent as much as P400 million during the campaign period. 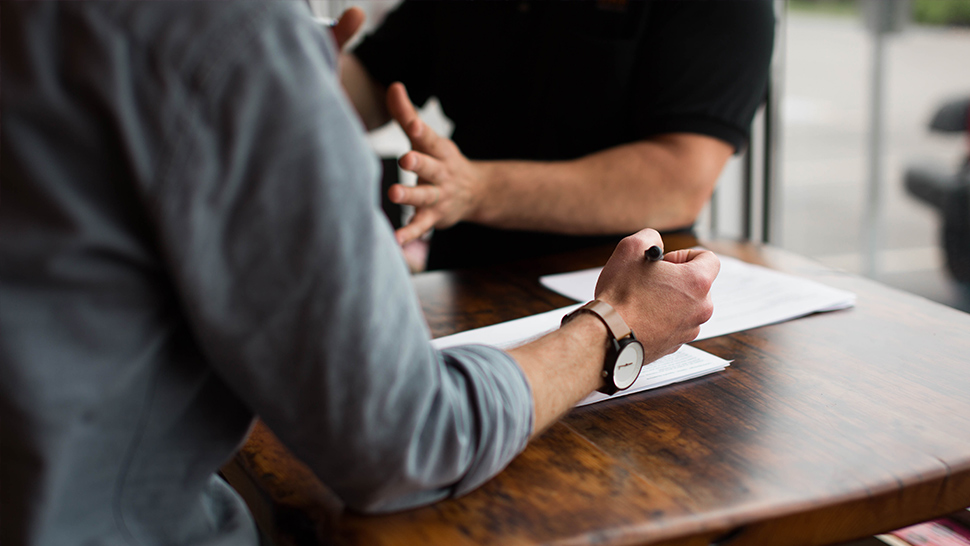 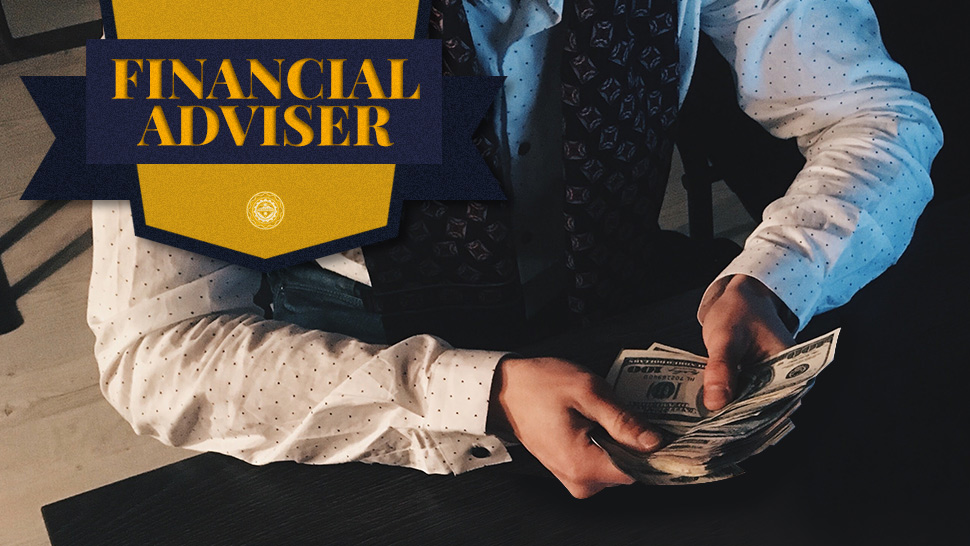 Financial Adviser: 5 Money Mistakes to Avoid if You Want to Become Wealthy
All Photos
Comments
View As List