A subversive family's memoirs of the Martial Law years.

While exiled in the Netherlands in 1991, leading Communist Party of the Philippines (CPP) cadre Nathan Quimpo entrapped a spying CIA agent, and exposed him to the Dutch media. Previously, his brother Ryan had narrowly escaped to France to build a solidarity network for the Party. Even earlier, their eldest brother Norman was arrested for allegedly aiding in the smuggling of arms to the CPP’s New People’s Army (NPA). Their two other brothers, Jan and Jun, were martyred in 1977 and 1981 respectively.

Subversive Lives (Anvil, 2012), a joint endeavor of the Quimpo siblings compiled by Nathan and sister Susan, reads like a collection of fictional short stories. Martial law, after all, was a time when the bien pensant became anti-capitalist revolutionaries—fiction by today’s standards. Apart from being the most rigorous, the book is also the best-written work in this subgenre, bereft of the usual clichés like “Let’s remember martial law for the sake of our children.”

Those who have shared in the political illusions of the 20th century, notes historian Tony Judt, have a special insight into its history. Most of the ten Quimpo siblings, who were either members of the illegal CPP or its affiliated front organizations, participated in the fantasy of Jose Maria Sison’s Marxist-Leninist-Maoist Communism. In this sense, they are emblematic of a generation of left-wing baby boomers, who forsook middle class comforts in order to “serve the people.”

But the movement they once represented is obscure. Philippine Communism is fleeting, masked in media obfuscation, whereby a communist is never simply a communist, but rather a “militant,” a “national democrat,” or a “reaffirmist” (explaining these terms is another act of obfuscation). The Quimpo memoirs provide one of the few honest insights into how the CPP works, from recruitment processes, to life in a safehouse, to the internecine debates of great leaders ensconced in Utrecht. As historian Vicente Rafael notes in the introduction, reading the memoirs makes one almost “hear the rhythm of the revolution.”

This revolution was the most significant threat to Ferdinand Marcos’s authoritarian rule. By the mid-1980s, NPA membership had peaked to 20,000 troops, with that army’s central command gearing for a take-over of Baguio city by 1987 (the latter fact is based on my own research). Amidst this, Nathan Quimpo was in Mindanao, experimenting with the Nicaraguan-inspired strategy of using general strikes to trigger an island-wide uprising. In Manila, the police were shooting at Susan Quimpo and her comrades as they participated in the numerous mobilizations in the aftermath of the Aquino assassination. “Unknown to us all,” notes Susan, “we were active participants in a brewing insurrection.”

That insurrection, now known as People Power, is represented in popular discourse as a sublime moment of national unity. But the cleavages in its wake reveal more about the fortunes of contemporary Philippines. The EDSA revolution not only ended the Marcos dictatorship; it also portended the withering of a revolution.

“Your stay outside the country will not be long. A victory celebration of the revolution will greet you at the airport probably sometime in the year 1990,” read a comrade’s letter to Ryan Quimpo shortly before he left for France. The message belies the revolutionary optimism of the movement, evident as early as the 1970s when Chairman Sison would often proclaim “See you in Malacañang!” Since the communists had “scientifically” assessed the movement of history, and adjudged it their ally, the Philippines was theirs for the taking. But they were wrong.

The Filipinos who stormed Malacañang in February 1986 wore yellow and would not paint the country red. Marcos would not be replaced by Sison, but by a “bourgeois democrat” in the guise of Cory Aquino. Toward the end of the book, Ryan Quimpo writes a pained elegy for his and his siblings’ movement:

“Our movement was the main force that had fought and weakened the dictatorship over the past 14 years. Cadres and activists paid a high price, many with their blood, to bring about this day of victory. And yet, before our eyes, this sought-after victory had been once again stolen by the Americans and the local elite they control.” 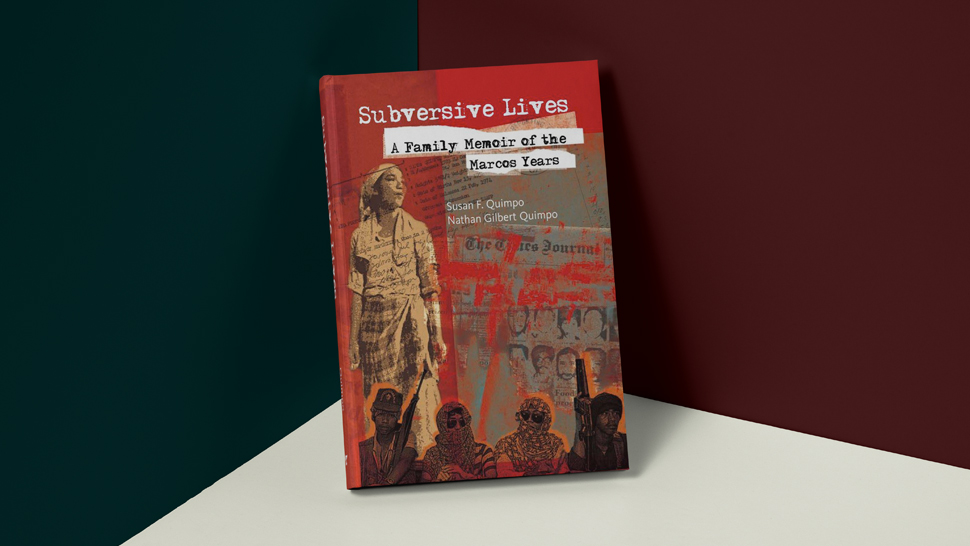 But would a red Philippines been any better? Life away from the movement and hindsight have led Nathan to answer in the negative: “Thank goodness, we didn’t win in 1986. If we had, the Philippines would have ended up with a regime worse than Marcos’s—a totalitarian dictatorship.”

The book thus ends with, as Nathan says, “mixed feelings.” Like the novelist Arthur Koestler, the former communists among the Quimpo family have left the certainties of totalitarianism to tell their story amid the dubiety of institutional democracy. But if the Marcos period has taught us anything, it’s that self-assured demagogues lead us astray. Listening to doubting gadflies may be a first step in a direction we have yet to comprehend. Subversive Lives, an ambivalent memoir, may not show us the way forward, but it tells us how not to regress.

This article originally appeared in the September 2012 issue of Esquire Philippines.

About The Author
Lisandro Claudio
Lisandro E. Claudio (@leloyclaudio on Twitter) is an Associate Professor at the Department of History, De La Salle University.
View Other Articles From Lisandro
Get The Latest Updates From Esquire!
Subscribe to our newsletter!
Comments
Latest Feed
Load More Articles
Esquire Money