Leni Robredo, the duly elected Vice President of the Philippines, amid the sound and the fury. 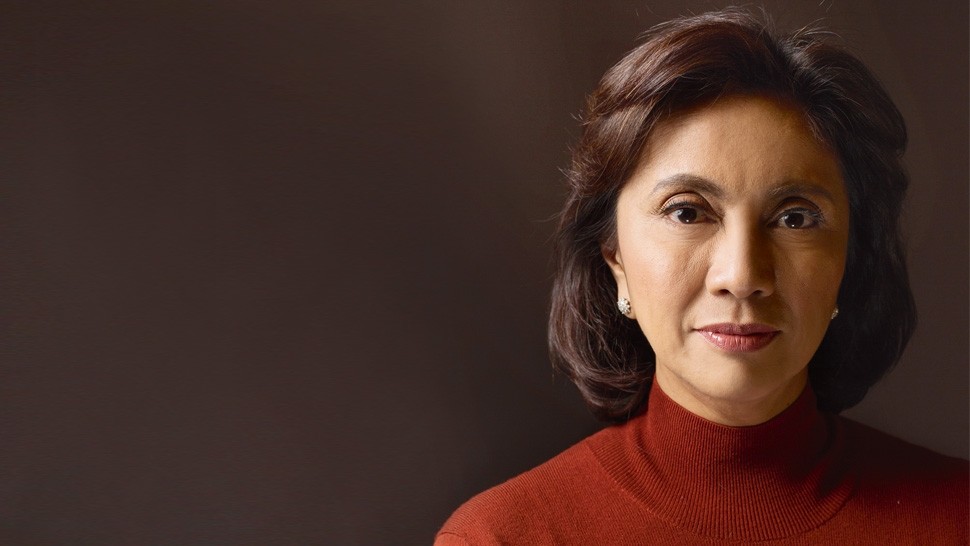 Perhaps for the first time in living memory, we have a Vice President who is more than a ceremonial figure. We should be paying attention to Leni Robredo. Here's an excerpt of our profile on her, the full version of which is available in our December 2016 / January 2017 issue. 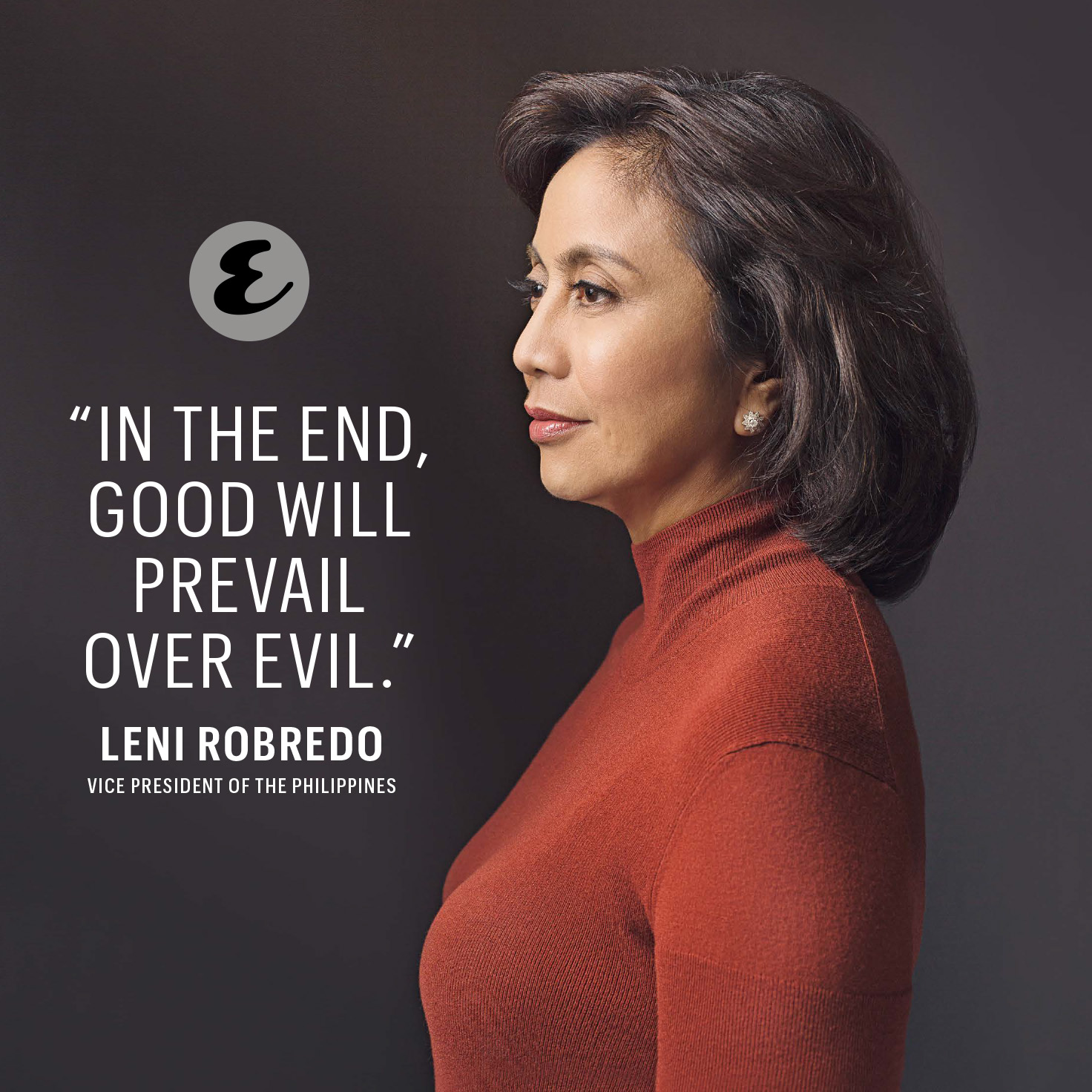 Consider: Vice President Leni Robredo has just emerged from an immensely charged November 8th in Tacloban—the third anniversary of the landfall of Super Typhoon Yolanda, on its own an occasion weighted with grief and duty, but one that made salacious headlines when President Rodrigo Duterte saw it fit to boast to an alarmingly receptive audience about how he made a habit of ogling Vice President Robredo’s legs. This, as the Vice President shared the stage with him and with a coterie of their colleagues, looking like she was reaching into her considerable reserves of restraint and class to not let the prattle and snigger of immature boys get to her. Let this pass, was the Vice President thinking? Let it pass quickly; there’s so much work I have to do today.

What can you, a citizen, do when your country’s president bandies about his habitual harassment of the second-highest executive in the land? What can you, a citizen, do when a man who was swept into power by 16 million Filipinos has habitually tagged your Vice President a woman-as-object, subject to male desire, first and foremost? What can you, a mere citizen, do to protest the tastelessness, the sheer offensiveness, of the country’s most powerful man—especially since he was elected into office riding on his repeated admissions of his womanizing ways, his tendency to shower women in the campaign trail with his advances, his “joke” about wishing he’d been the first in line to rape a missionary? Especially since this government has inexorably embraced misogyny as a guiding principle? You reach into the considerable reserves of anger and outrage that you possess, and you protest and you condemn, and you make sure to do so standing with her.

You reach into the considerable reserves of anger and outrage that you possess, and you protest and you condemn, and you make sure to do so standing with her.

Following the furor that met the president’s demeaning, the Vice President released a statement: “When President Duterte made inappropriate remarks, I deliberately chose to ignore these. There are larger and more urgent issues we confront as a nation that demand our collective attention… Tasteless remarks and inappropriate advances against women should have no place in our society. We should expect that most of all from our leaders.” She capped her statement with a promise to fulfill her mandate as “the duly elected Vice President,” regardless of the noise around her.

It was on November 8th, too, that the Supreme Court rejected all petitions seeking to prevent the late dictator Ferdinand E. Marcos’ burial at the Libingan ng mga Bayani, sending shockwaves of stunned outrage among what was looking like an increasingly powerless opposition. Outrage—and anger, and betrayal, and grief. A move campaigned for by Marcos progeny who were rising higher and higher in the political ranks, and with the President’s blessing: Rendering the highest honors to a man who masterminded one of the bloodiest regimes of modern Filipino history, who plunged the Philippines into a kind of political, social, economic muck that, thirty years on, we’re still struggling to get out of.

And the Vice President, in Romualdez country, surrounded by tarpaulins bearing the late dictator’s son’s name instead of hers—the very same late dictator’s son who’s filed a case against the Supreme Court protesting his loss against Vice President Robredo—had to roll with that punch, too: “Ako kasi, I have always been very vocal about my opposition. There were talks already that they would decide that way—pero alam mo ‘yun, because you felt so strongly about it, parang you were always hoping that until the very end, they would have a change of heart? Sa’kin, nandoon ako sa Yolanda anniversary when I learned of the decision. Yung physical manifestation, talagang…” The Vice President sighs, shrugs, waves that away. “Pero, alam natin na wala tayong magagawa. Nirerespeto natin yung Supreme Court. Palagay ko, sana hindi mahinto yung pag-express natin ng feeling of indignation. Kasi tingin ko, it’s not as simple as—sasabihin na, ‘Patay na ‘yun e, kalimutan na lang natin.’ Parang, tingin ko kasi: Yung values natin as a nation, di ba?”

I tell her that a lot of people are scared—by this seeming denial of historical fact, of the plight of thousands who suffered under the dictatorship. She says, “Yun nga eh. Parang may chilling effect siya. May chilling effect ‘yung ginagawa na… Ako kasi, parati akong optimistic. Parati akong optimistic na everything happens for a reason. I think in the end, parati ring yung good will prevail over evil.”

Before that rallying cry has a chance to sink in, she continues: “Kaya lang, yung tanong lang: Yung wounds sa atin: How much can we carry? Kasi sunod-sunod. Sunod-sunod.”

The rest of the cover story can now be downloaded digitally. The print magazine will hit newsstands next week. 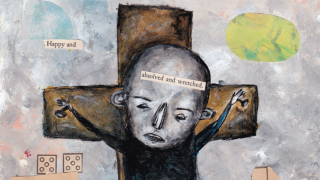 Keeping Sane in the Age of the Troll 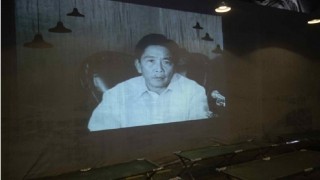 Eulogy for the dictator
All Photos
Comments
View As List