How is the American casual apparel brand bucking the 'retailpocalypse' trend? 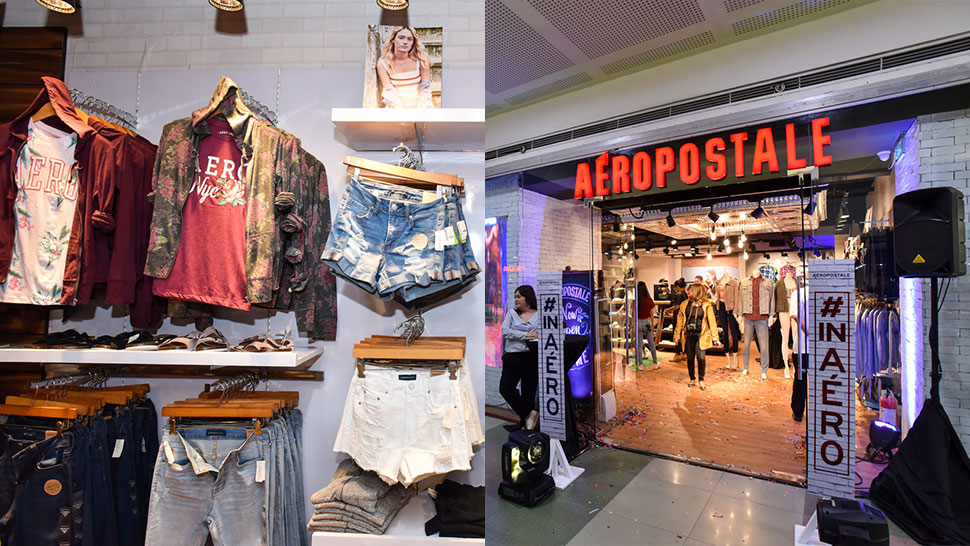 Amidst news of popular fashion retail companies like Topshop and Forever 21 shuttering their doors and filing for bankruptcy, some brands seem to be bucking the trend and are thriving and expanding in these uncertain times.

Aéropostale is one such brand. The American casual apparel and accessories store has actually been present in Manila through a licensing partnership with Stores Specialists Inc. (SSI) for a number of years, but after the contract was up for renewal last year, the principals in the U.S. awarded it to a different local company.

“We’ve been very interested in the brand for a long time,” says Jack Halaby, COO of Retail Dynamics Industries Inc. (RDII), which now handles Aeropostale in the Philippines. “Negotiations were done last year and we took over in January this year. We think we can do really well with the brand.”

The history of Aéropostale

Established in the early 1980s by R.H. Macy & Co., Inc. (the company behind Macy's) as a department store private label initiative, the Aéropostale brand initially targeted men in their 20s. Macy’s subsequently opened the first mall-based Aéropostale specialty store in 1987. Over the next decade, Macy's expanded the brand to over 100 stores and eventually sold its specialty store division to Aéropostale management and Bear Stearns Merchant Banking in August 1998.

In May 2002, Aéropostale management took the company public through an initial public offering and listed it on the New York Stock Exchange.

After growing to as many as 900 stores in North America in the late 2000s, the brand couldn't escape the seismic shift in the retail landscape.

"Declining mall traffic, a highly promotional and competitive teen retail environment, and a shift in customer demand away from logo-based product have contributed to our unfavorable financial performance," the company said in its 2015 filing with the U.S. Securities and Exchange Commission.

The following year, Aéropostale was delisted from the stock exchange and eventually filed for bankruptcy, closing over 100 stores in the U.S. in addition to the 41 that had earlier been shuttered in Canada.

But the company emerged from bankruptcy six months later, thanks to a consortium led by American mall operators Simon Property Group and General Growth Properties. Over 500 Aéropostale stores reopened in the U.S. by January 2017, and today, thanks to licensing partnerships, it counts over 350 more stores internationally, including the Philippines.

Aéropostale is back in the Philippines

Halaby says the company isn’t worried about the troubled state of retail fashion brands, especially in the U.S. On the contrary, he says Aéropostale is still opening more stores in its home country and elsewhere in the world.

“We still believe that Aéropostale is a very strong brand, primarily in the U.S.,” Halaby says. “They’re actually building more stores and putting more effort and spending a lot in marketing, which is something that we can bank on. There’s a lot of support.”

One other reason that Halaby says he’s not worried about the so-called "retail-pocalypse" is his company’s own portfolio of retail brands. Besides Aeropostale, RDII handles Playboy, Starter, Netflix Stranger Things, Kendall and Kylie, and Girbaud. According to Halaby, most of these brands are still growing.

“We still believe there’s a strong market for retail brands here,” he says.

While Aéropostale targets a slightly younger market in the U.S.—between 14 to 17 years old—Halaby says that in the Philippines and in many other international markets, the brand is selling to slightly older customers: somewhere between 16 and 18 years old to 24 and 26 years old.

Another way Halaby says they are adapting to market trends and, by extension, driving sales is by tweaking Aéropostale’s own merchandise line to fit Filipino consumers. Company principals from the U.S. have granted RDII a special license to produce certain parts of the current collection on its own , for example, fit the climate in the country. This means apparel made of fabrics that are a bit lighter and cooler. The local retailer says it is also working on some of its own designs for the collection.

“It’s not with everyone that [the principals] do that,” Halaby explains. “But we have a special arrangement that we can do our own designs and manufacture our own garments. Not all, of course, but just a small portion of our collection.”

Aéropostale opened its first store in Manila under new management in SM North EDSA last September. True to his word, Halaby says they plan on expanding really quickly—and soon. Already there are plans to open a second branch in SM Megamall, plus “one or two more stores within the year.”

“Next year definitely we’ll be opening more stores and we plan on expanding very quickly to a point where we reach a certain amount of scale, between 20 to 30 stores in the next few years. We’ll take it from there.”

The Big Anime Trend Lives On In Michael B. Jordan's New Coach Collab