After a lifetime of traveling the world, Garrison Rousseau has made his home on a quiet island in the south. 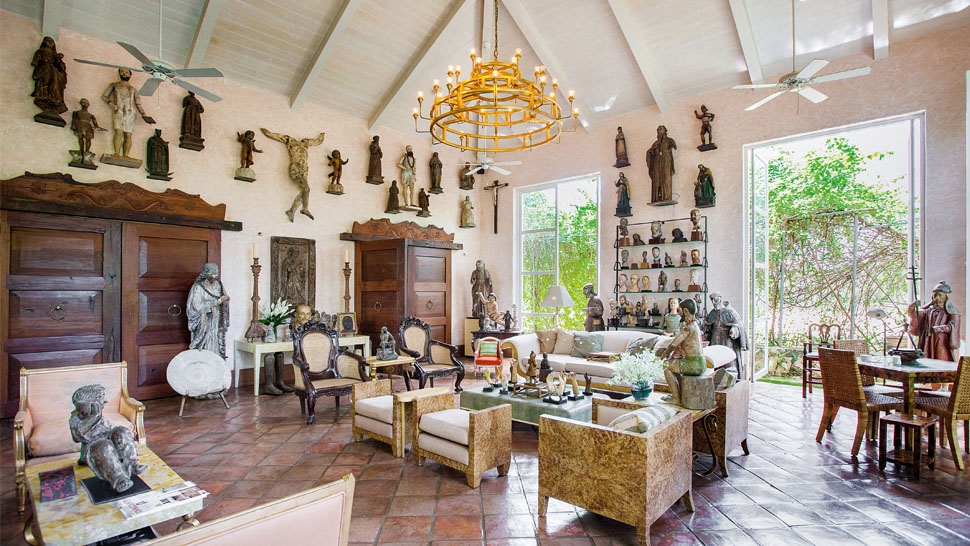 An elegant four-poster, claw-foot bed, inlaid with marble and mother of pearl, sits on the second floor of the guest house of furniture creator and bon vivant Garrison Rousseau on Mactan island.

The bed once belonged to Bao Dai, the last emperor of the Nguyen dynasty, the last ruling family of Vietnam.

“His daughter was my friend in Paris and she didn’t know what to do with it, so I bought it and took it from the palace,” says Garrison.

The walls of the guest house are finished with plaster mixed with straw. Garrison enjoys experimenting with a variety of materials and textures. 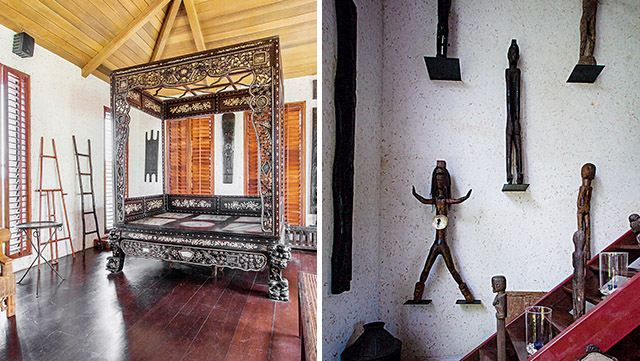 The bed that once belonged to Bao Dai, the last emperor of the Nguyen dynasty, the last ruling family of Vietnam. The emperor's daughter was Garrison’s friend in Paris.

“Every client has a different taste, so we test them out. Parchment, perhaps. Or leaf. Some with lacquer. Some matte, some natural,” he says.

An eclectic mix of furnishings adorns the space—wooden pagan gods from Ifugao, territory markers to warn off rival tribes, woven baskets, and ancient tools. Crystals that Garrison purchased at the auction of artist, and tastemaker Tony Duquette sit languidly on a table. Outside, a fountain of water runs into a stone-lined lily pond, from beneath a marble bust of a turbaned Moor. 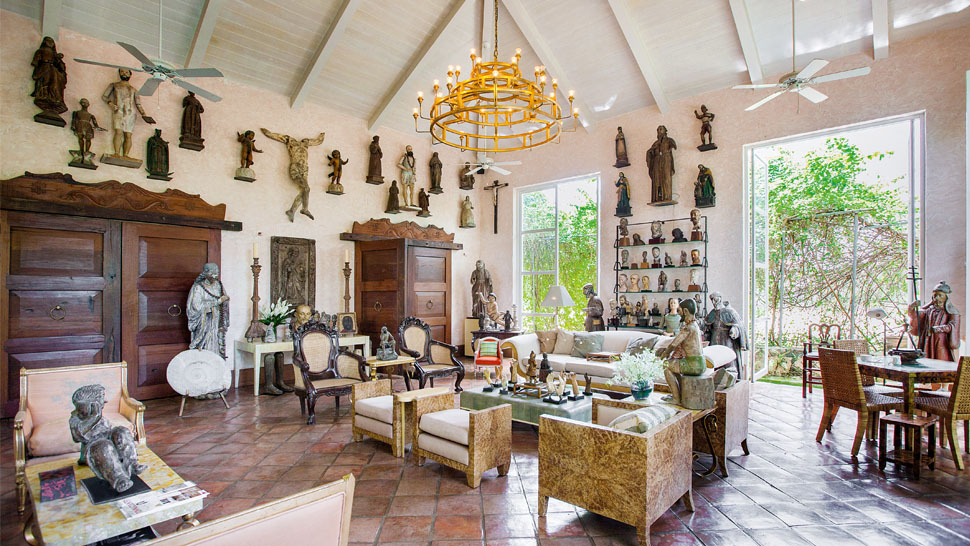 “The Moor was supposed to be sent to my apartment in New York, but they sent it here by mistake. I was so upset. It took five people to move it. This guest house was supposed to be all-Filipino,” says Garrison. He himself is an eclectic mix, British and French by blood, born and raised in Hong Kong, and now a resident of Mactan, where he usually is roughly half the year. The rest of the time is spent in New York, where he travels for business about eight times a year, and in Europe, where his siblings live.

Garrison ended up in Mactan almost two decades ago, upon the suggestion of his friend Minnie Osmeña, when he had been looking for a place to set up an atelier. At the time, Minnie’s brother, Tommy Osmeña, had been mayor of Cebu, and Minnie introduced the two.

The guest house is where cocktails are usually served before dinner when Garrison throws parties, and he throws them quite often, at least a couple of times a month. 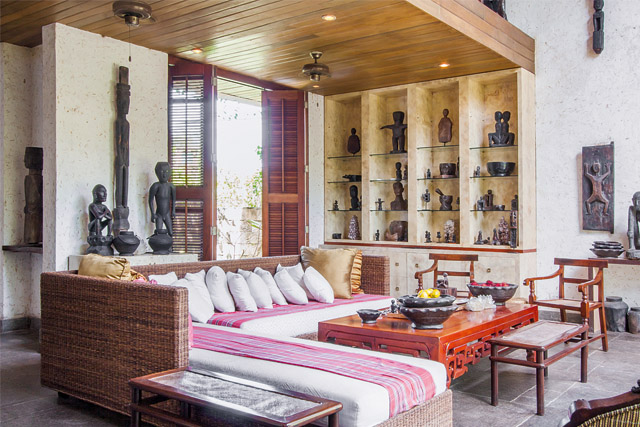 Garrison’s guest house is decorated with pagan gods from the north, territory markers, baskets, and .

He invites locals who are driven from Cebu City, just across the bridge, and visitors, who fly across the seas from Manila, Hong Kong, the U.S., and Europe to catch up on the latest with him and to laze on the sandy beaches of Mactan. It’s always a good mix of people to ensure good conversation, and make things a bit more interesting, he says.

Dinner is served in the main house, across the tranquil, lush garden, where guests walk down the tree-lined path lit up by torches and capiz lamps hanging from the trees. 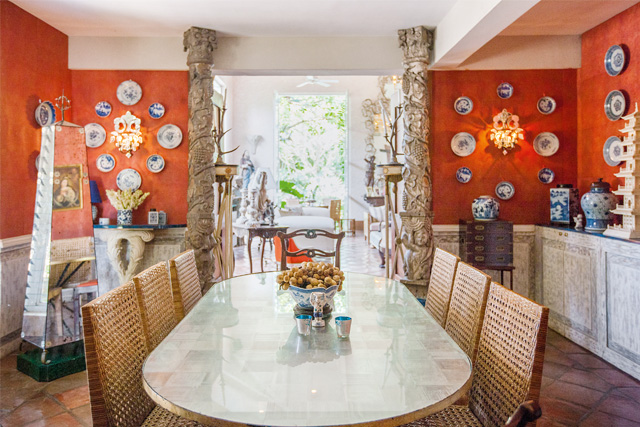 The dining room, with its Babe Paley silver-leaf table, is the scene of many intimate dinners with friends. The entrance is flanked by wooden totem-pole like structures.

Garrison’s sumptuous dining room walls are covered with shagreen, one of his signature natural materials. Two wooden totem pole-like pillars act like sentries on either side of the entryway. On the buffet a tiered Chinese temple and large blue-and-white porcelain vases. In the of the room, the silver-leaf Babe Paley dining table, surrounded by chairs. At dinner time, candlelight creates a more intimate, romantic atmosphere, as flickering shadows dance about the room, amid porcelain plates and religious icons on the walls.

Garrison’s menus are always European because it’s what he knows best.

“We do a lot of soufflés,” he says. “Also a lot of fish, since the fish on the island is so wonderful.”

And of course, there is always lots of wine, usually Rosé, because of the climate, and Italian wines, to match the environment.

Coffee is usually served in the , the main, grand room of the house. The ceilings are high and airy, and the doors are kept open all hours of the day.

“I never use air conditioning. They’re installed but I never use them,” says Garrison. “I love hearing the wind rustling through the trees.”

The room is filled with antique busts of saints, crucifixes, rosaries, and other religious objects, which Garrison acquired only in the last few years. He had been browsing through an antique store in Malate just for fun when he saw a shipment of being prepared to be sent out to a buyer in France. His interest was piqued, and he made a better offer. The never left the Philippines. 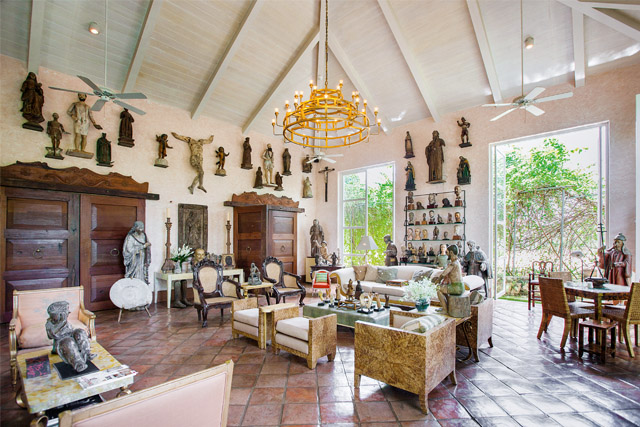 The , the main grand room of the house, is filled with , and other religious items. The gold chandelier, similar to what Garrison designed for Tory Burch, takes .

Dismembered porcelain hands sit on a green shagreen-topped ottoman. A card table finished with tiger pen shell, is what Garrison and his friends use when they play bridge twice a week. Twigs of wood in different , entwine and encircle a mirror. Armchairs, inspired by Jean- Michel Frank, are covered with tobacco leaf. The pieces are Garrison’s own creations, rejects that he felt did not make the cut, which he refused to send to his discerning clients, and which he instead kept for himself. He always makes sure the pieces he sends out are flawless, he says.

Hanging from the ceiling, a gold chandelier, similar to the ones he designed for fashion designer Tory Burch that hang in her stores worldwide. naked bulbs shine brightly because Garrison sent its little lampshades to Tory, and has yet to replace them.

In one corner of the room is a miniature armchair in bright red, standing out from the more neutral in the room. 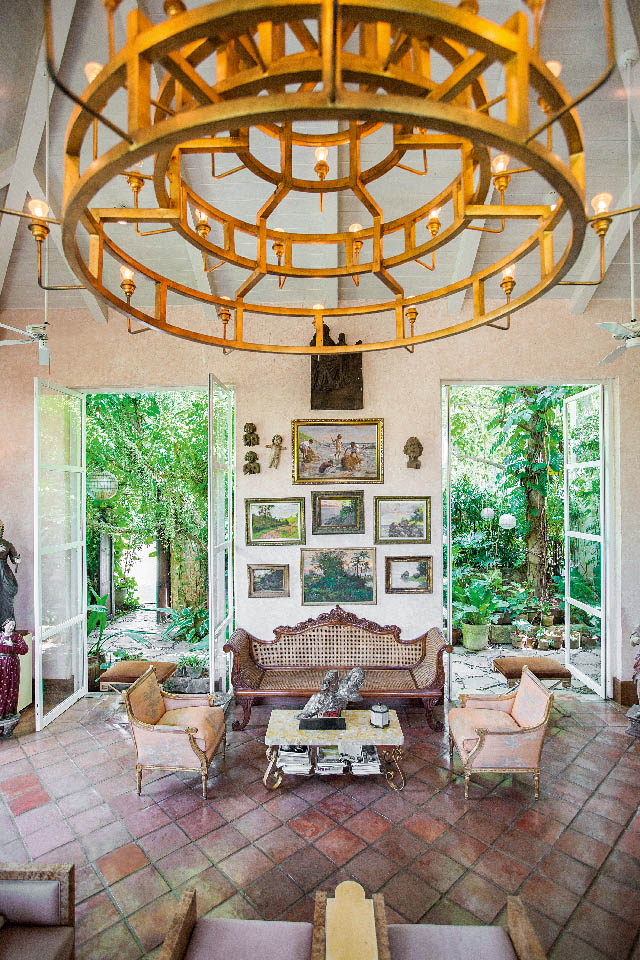 I love hearing the wind rustling through the trees," says Garrison. He keeps the doors and windows of his home open all hours of the day.

The seat belongs to little Mather, Garrison’s crown prince. He was named after one of Garrison’s ancestors, Cotton Mather, the Puritan minister whose writings greatly influenced the Salem witch trials of the 17th century. Mather is the reason Garrison now spends more time in Mactan than anywhere else in the world.

“I’m a slightly older papa, but I try to be involved with Mather every day,” says Garrison. The intimate, tobacco-leaf walled den is a of the pair.

An inviting daybed topped with pillows invites one to lounge and read, softly lit by lamps held up by floating hands. A silk door with a brass knocker blocks out the noise of the outside world. 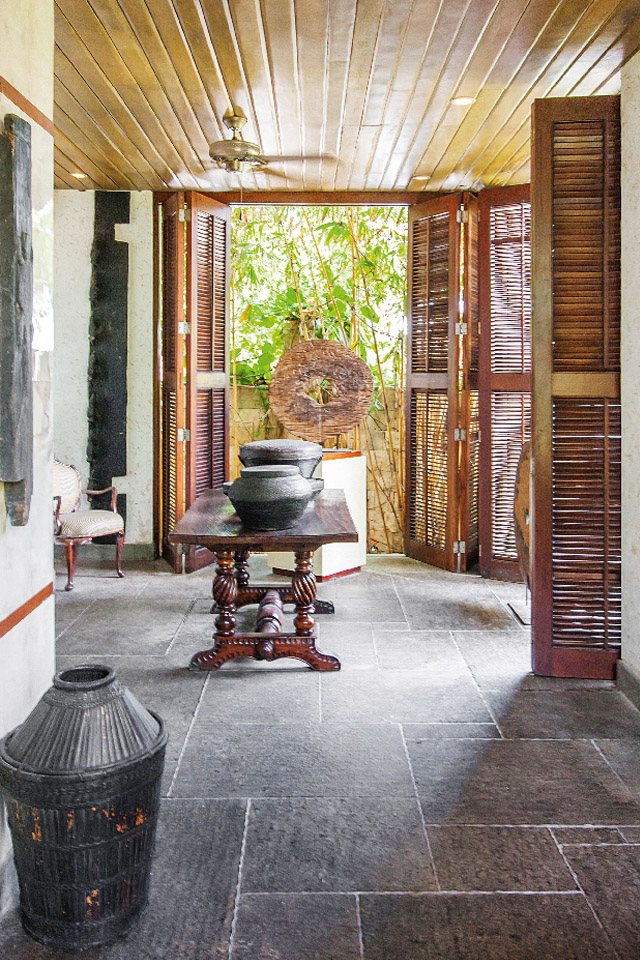 A hidden staircase, masked by one of the wall panels in the dining room, leads up to the bedrooms.

Garrison’s staircase is by no means dark. It is bright red-orange, with walls covered in art.

It is here where Mather’s presence is made known, with a toy car, a plastic easel, and tubs of toys on the landing.

stickers mark the entrance to his sleeping area. “He has taken over practically every room,” says an amused Garrison, his eyes twinkling. “Every room has become his playroom. We’ve never had a problem with him breaking anything.”

This story was originally published in the June 2013 issue of Town&Country. 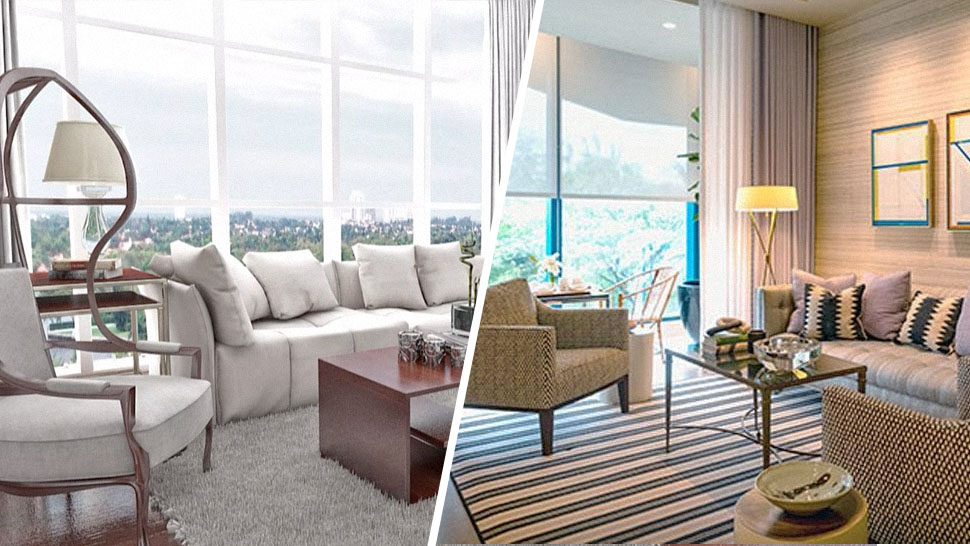 How Much Do Manila's Most Luxurious Condos Cost? 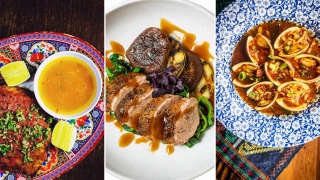