It was made at the workshop of Segundina Vizcarra. 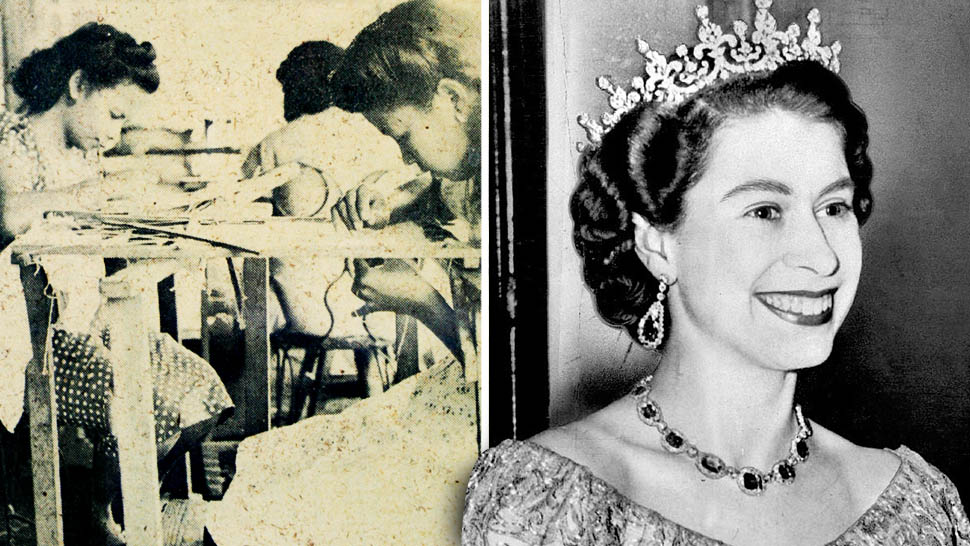 As soon-to-be-monarch and a celebrated public figure, then Crown Princess Elizabeth received thousands of presents and well wishes from almost every corner of the globe in honor of her wedding to the Duke of Edinburgh in 1947.

U.S. President Harry Truman and his wife presented the royal couple with a crystal vase, while Mahatma Gandhi sent them a hand-spun piece of lace embroidered with the words “Jai Hind,” which meant “victory for India.” In total, the couple received more than 2,500 presents and 10,000 telegrams. The gifts were then displayed in a room at St. James’s Palace, where anyone could come and view the stunning collection.

Similar to Gandhi’s, another handmade gift that was also most likely on display was a table set made from piña cloth, sent to the young princess and her groom by the National Federation of Women’s Clubs of the Philippines. It was the only gift sent from the Philippines, according to a magazine dated February 15, 1948. 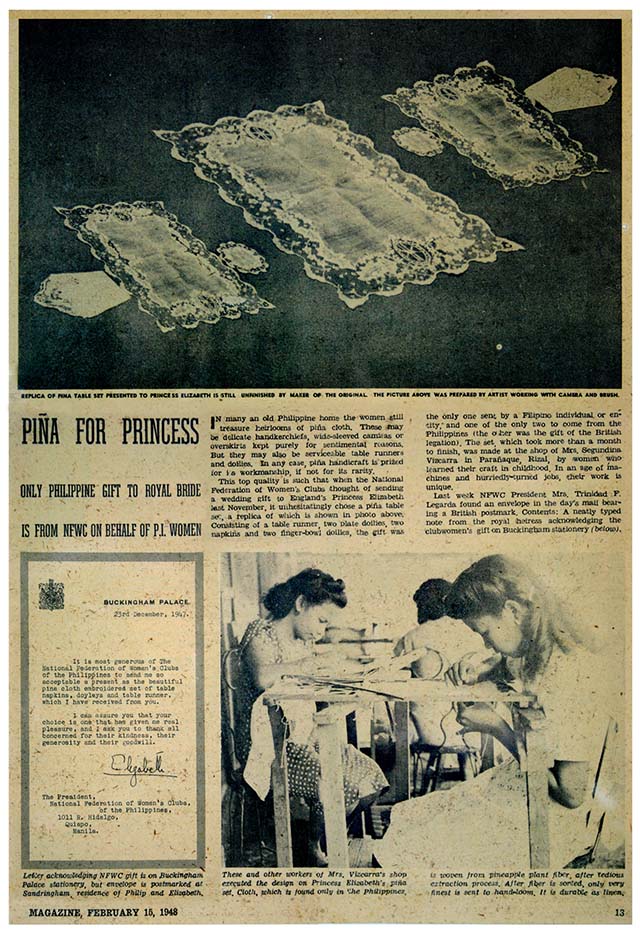 Exactly 71 years later, Rita Nazareno shares this tidbit with the news that it was her own grandmother Segundina Cornejo Vizcarra’s shop that produced the set. The gift generously included a table runner, two plate doilies, two napkins, and two finger-bowl doilies especially made for the royal couple’s wedding. 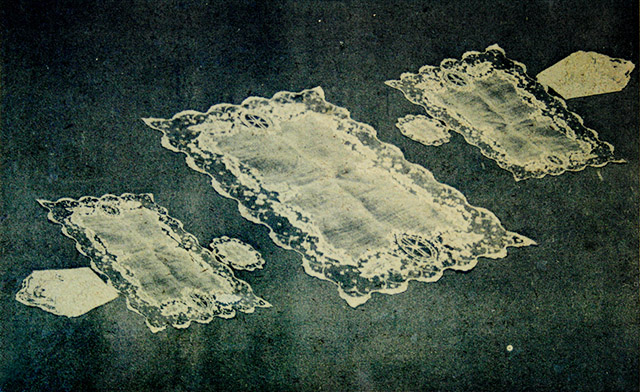 Graciously, Buckingham Palace and Princess Elizabeth wrote the federation back, thanking it for the present. It said:

It is most generous of The National Federation of Women’s Clubs of the Philippines to send me so acceptable a present as the beautiful piña cloth embroidered set of table napkins, doyleys and table runner, which I have received from you.

I can assure you that your choice is one that has given me real pleasure, and I ask you to thank all concerned for their kindness, generosity and their goodwill.

The magazine page featured photos of the female weavers at Vizcarra’s shop and a replica of the piña table set. S.C. Vizcarra specialized in the art of hand-weaving, a tradition and business continued by her daughter, Vicky, and later on her granddaughter, Rita.

Rita Nazareno left her post as an Emmy Award-winning television producer in the United States to work with the family luxury brand S.C. Vizcarra, which has been producing handwoven accessories and bags at her grandmother’s workshop founded in 1925. Nazareno later established her own more contemporary line of handwoven accessories under S.C. Vizcarra called ZACARIAS 1925. Through these two brands, Nazareno continues her grandmother’s legacy. Accessories by S.C. Vizcarra and ZACARIAS1925 are showcased at Paris Fashion Week twice a year and are distributed to over 40 stores around the world, CNN Philippines writes. These creations are a testament to the brand that Segundina Vizcarra started, which retained its international influence in the fashion and lifestyle scene for almost a and continues to extend its reach under the helm of Nazareno. 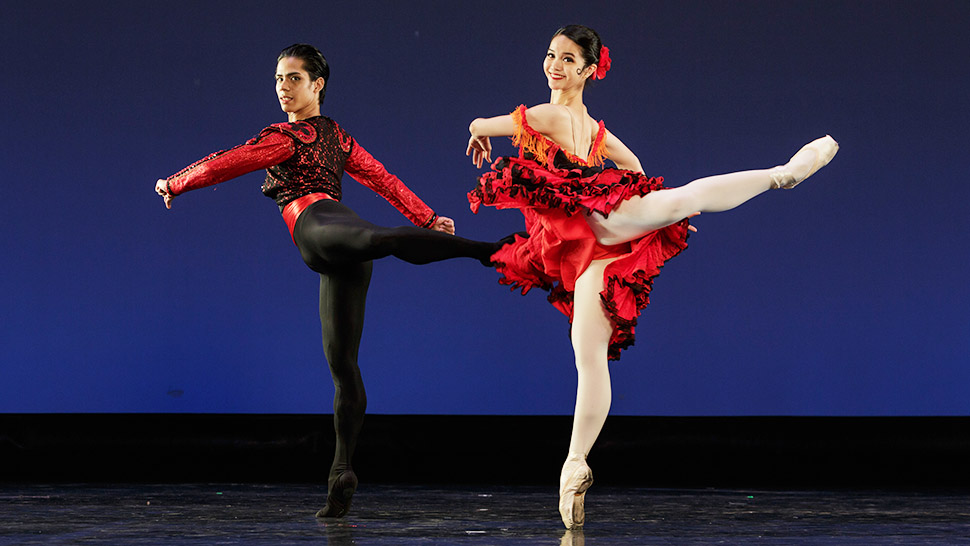 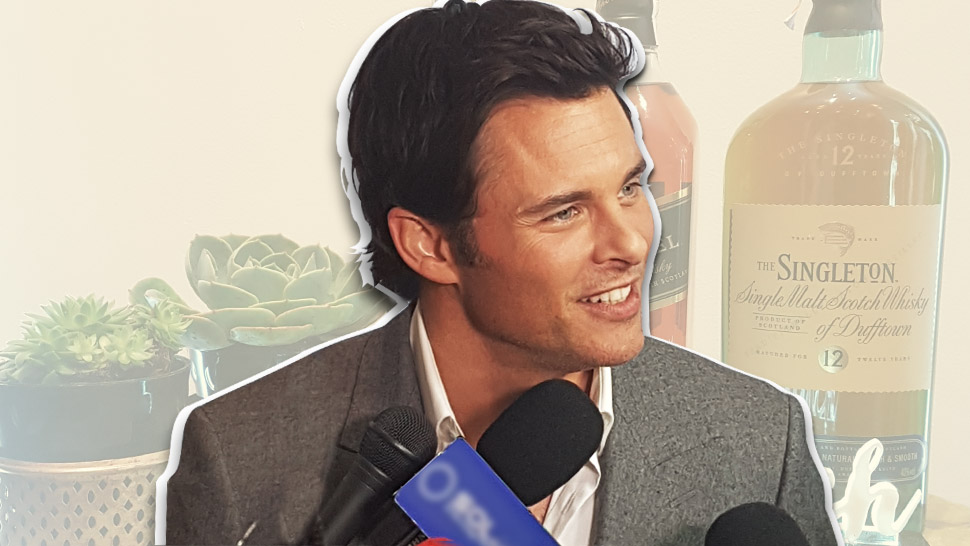