Imagine all the luxury possible in a car. And then some.

For most of us, it takes years to save up for a new car because we want to get most bang for our hard-earned buck. But for a select few who have that “F you money,” the question isn’t how much a car costs, but how it makes you feel. And if you want to feel anything but ordinary, then the brand-new Rolls-Royce Cullinan, which was launched in Manila on Wednesday, March 13, might be just for you.

It’s hard to describe seeing a Rolls-Royce in the metal. Sure, it has a distinct look that’s hard to miss, but it isn’t just that. It’s the things you can’t physically see in the car that make the most impact. It’s the idea that someone far from ordinary and regular is in the vicinity. Because, let’s face it, you can probably build an entire community with the price of one of these things. 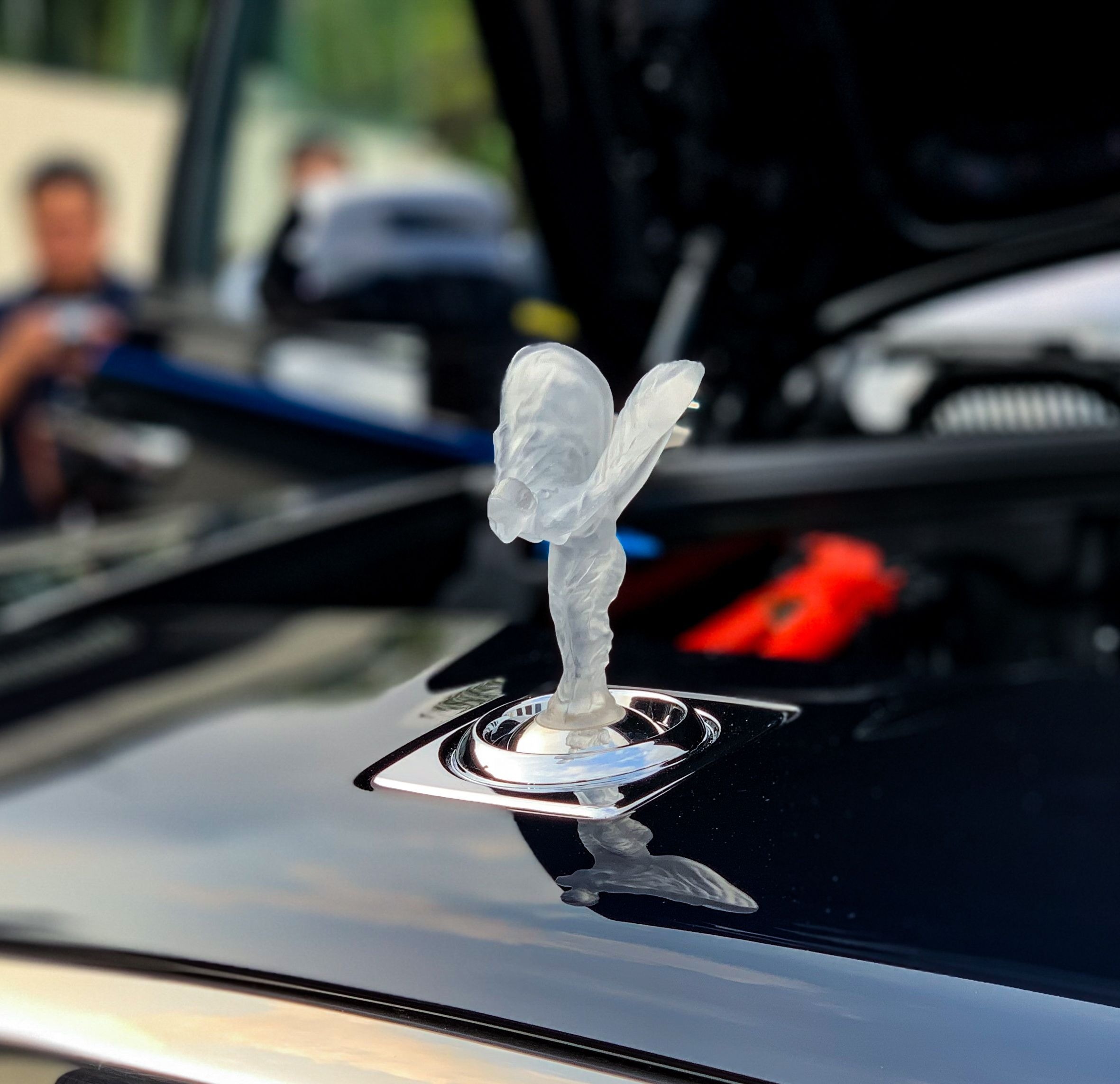 ADVERTISEMENT - CONTINUE READING BELOW
The Spirit of Ecstasy, the symbol of Rolls-Royce, sits atop the Cullinan's hood IMAGE: Cyrian Agujo

Price aside, the Cullinan continues that luxurious tradition. The car itself—the first-ever SUV of the brand—evokes no comparison to anything you’ve seen prior. It’s long (5.3 meters), wide (2 meters), and tall (1.8 meters) and features that ever-so-recognizable grille and emblem. It has the same understated luxury look of other models like the Phantom and Ghost but being an SUV, everything is a bit bigger and higher.

According to Sven Grunwald, product and operations manager for Rolls-Royce Asia Pacific, the Cullinan was designed with one thing in mind: make a vehicle with the famed “magic carpet ride” of a Rolls-Royce that you can take anywhere.

“We’ve had huge demand from people wanting to have a car that can be used in a practical sense where you can load something in the boot, use it as a family vehicle with kids at the back,” he told Esquire Philippines at the launch. “But people also still wanted to have the qualities and ride comfort of a Rolls-Royce.”

If you somehow forget what car you’re in, you’ll be immediately reminded once you go inside. Probably the easiest way to describe the interior is to imagine a private jet—make it smaller, and swap the yoke for a steering wheel. The features and amenities are just mind-blowing. 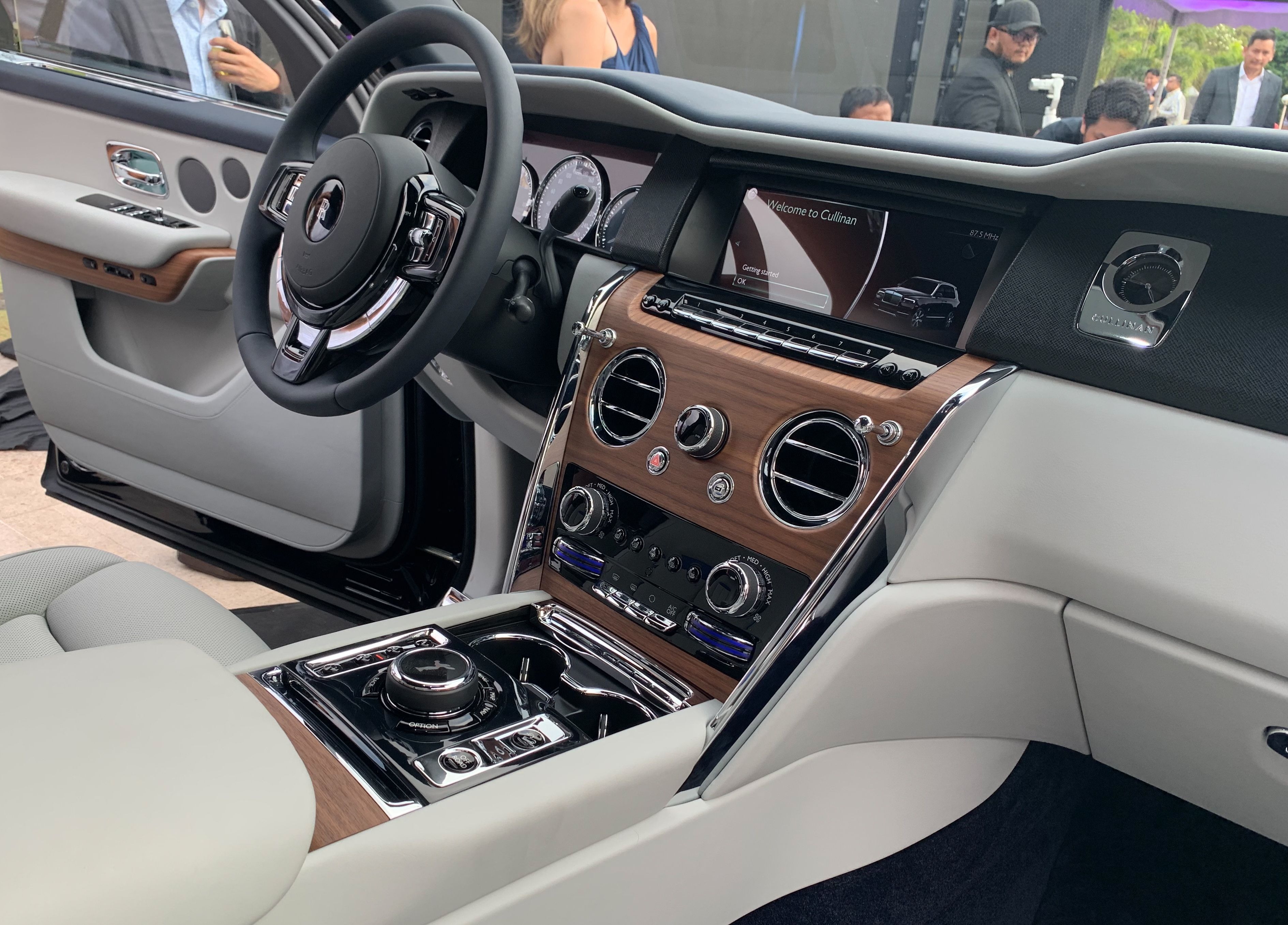 You’ve got leather everywhere and everything can be controlled with just a touch of a button thanks to two, fully automated center consoles. At the front, you have all the gizmos you can think of: all manners of gadget connections (USB C, USB A, HDMI, Blu-Ray), and wireless charging. Of course, you have climate control, a high-resolution display, and one-push 4x4 functionality. 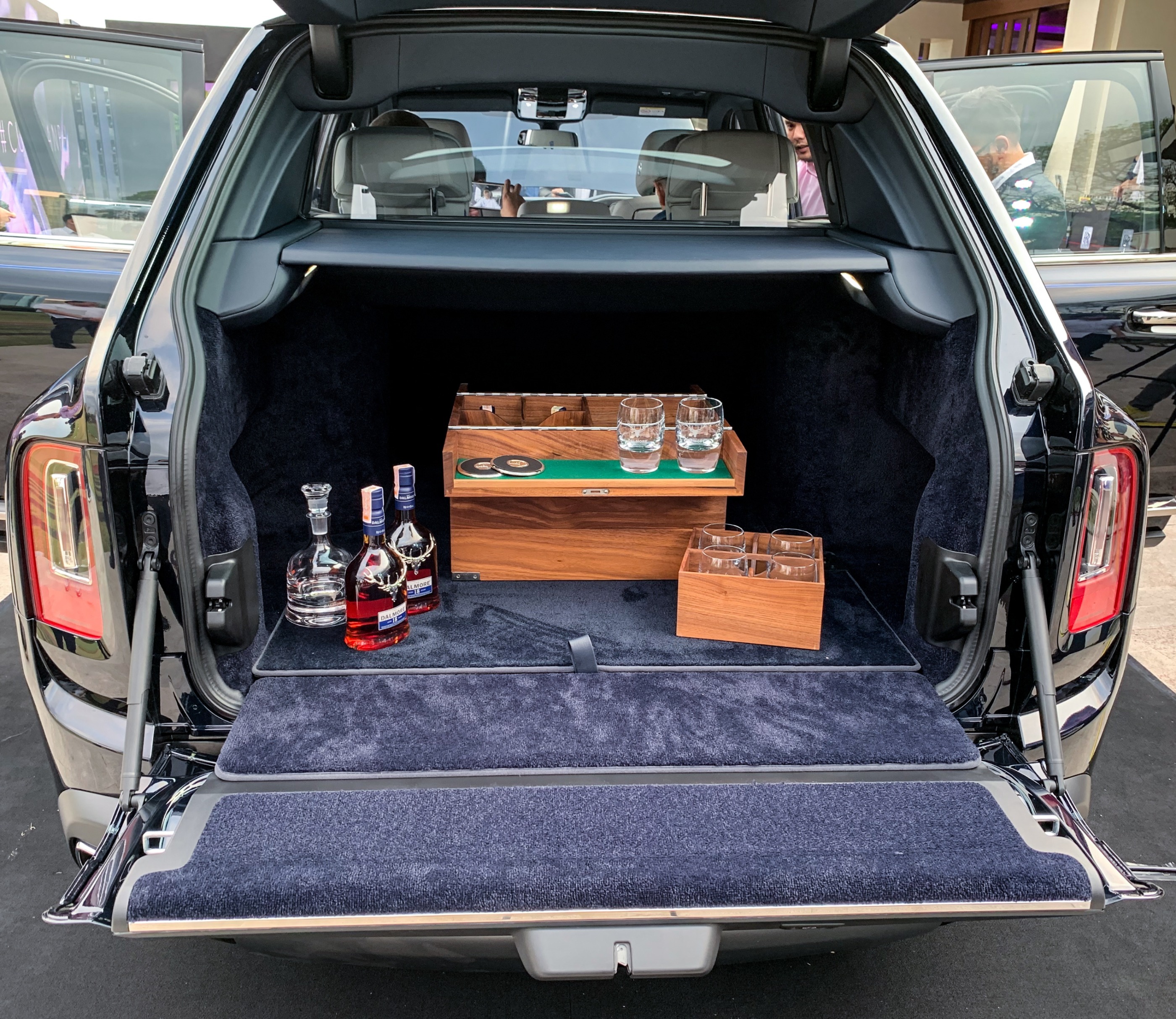 Everything you need for a classy, luxurious party IMAGE: Cyrian Agujo

But at the back is where the party really is at, and we mean that literally. How many people can say that they have a drinks cabinet, whiskey glasses, a decanter and ref, and Champagne flutes at the back of their car? And oh, you have two, theater-style touchscreens and picnic tables for your passengers in case they get, you know, bored at being too comfortable.

To top it off, the Cullinan has a bespoke 18-speaker, sound system. That’s not a typo: this thing has 18 speakers.

“Everything is developed in-house. We don’t partner with other brands to create the experience,” adds Grunwald.

Want to get an idea how obsessive Rolls-Royce is when it comes to design and features? Check out this umbrella, which pops out of the passenger door. After using it, you simply put it back inside and it will be air-dried. Thoughtful. 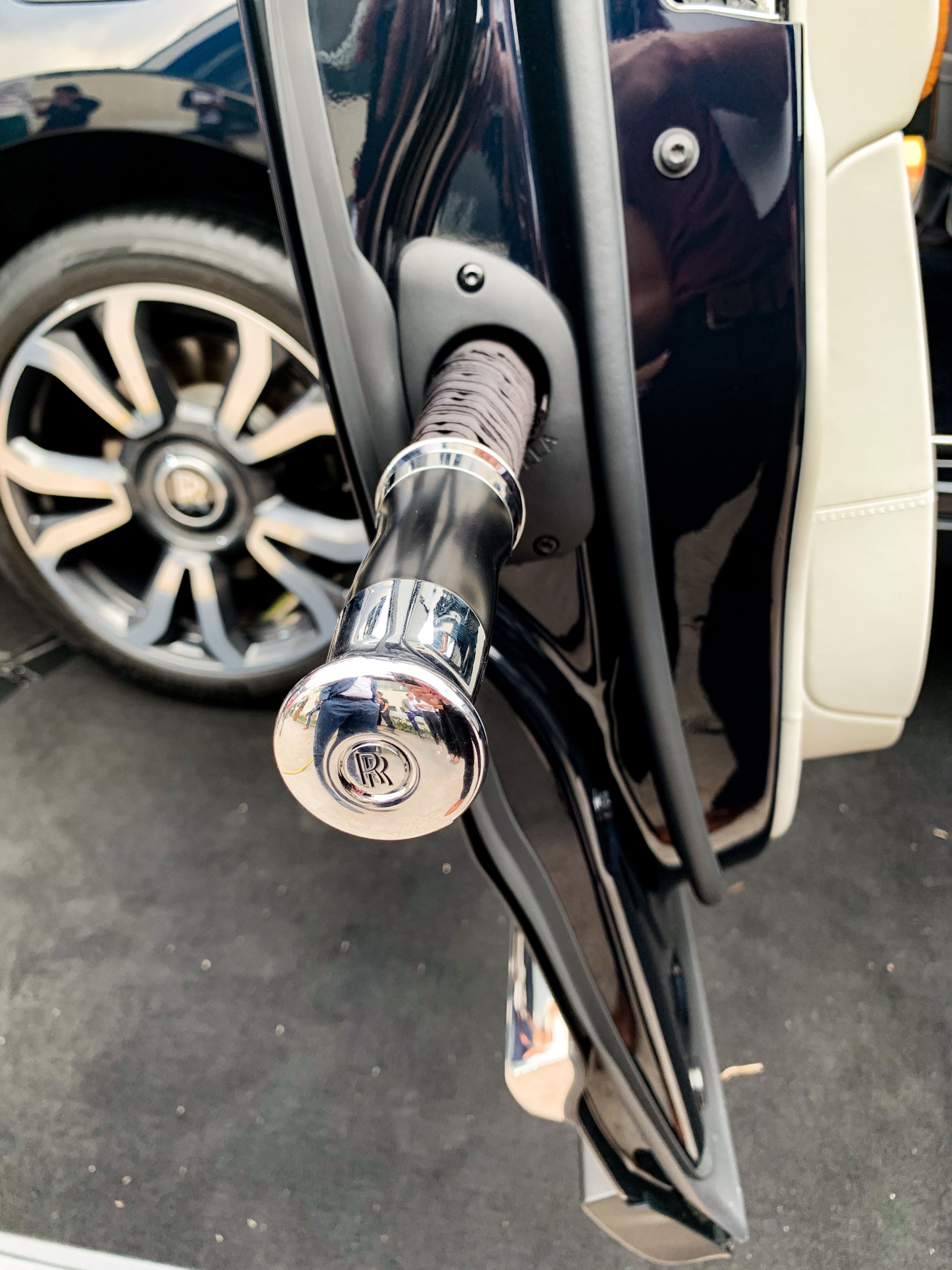 A Rolls-Royce umbrella pops out of the passenger door IMAGE: Cyrian Agujo

And just so your passengers can enjoy their whiskey and movie at the back without any distractions, the Cullinan has a class-first partition glass that separates the passenger row from the trunk.

“If the boot has been opened, none of the hot air will come into the cabin space… the glass also shields the sound and you will have an even quieter experience,” explains Grunwald. 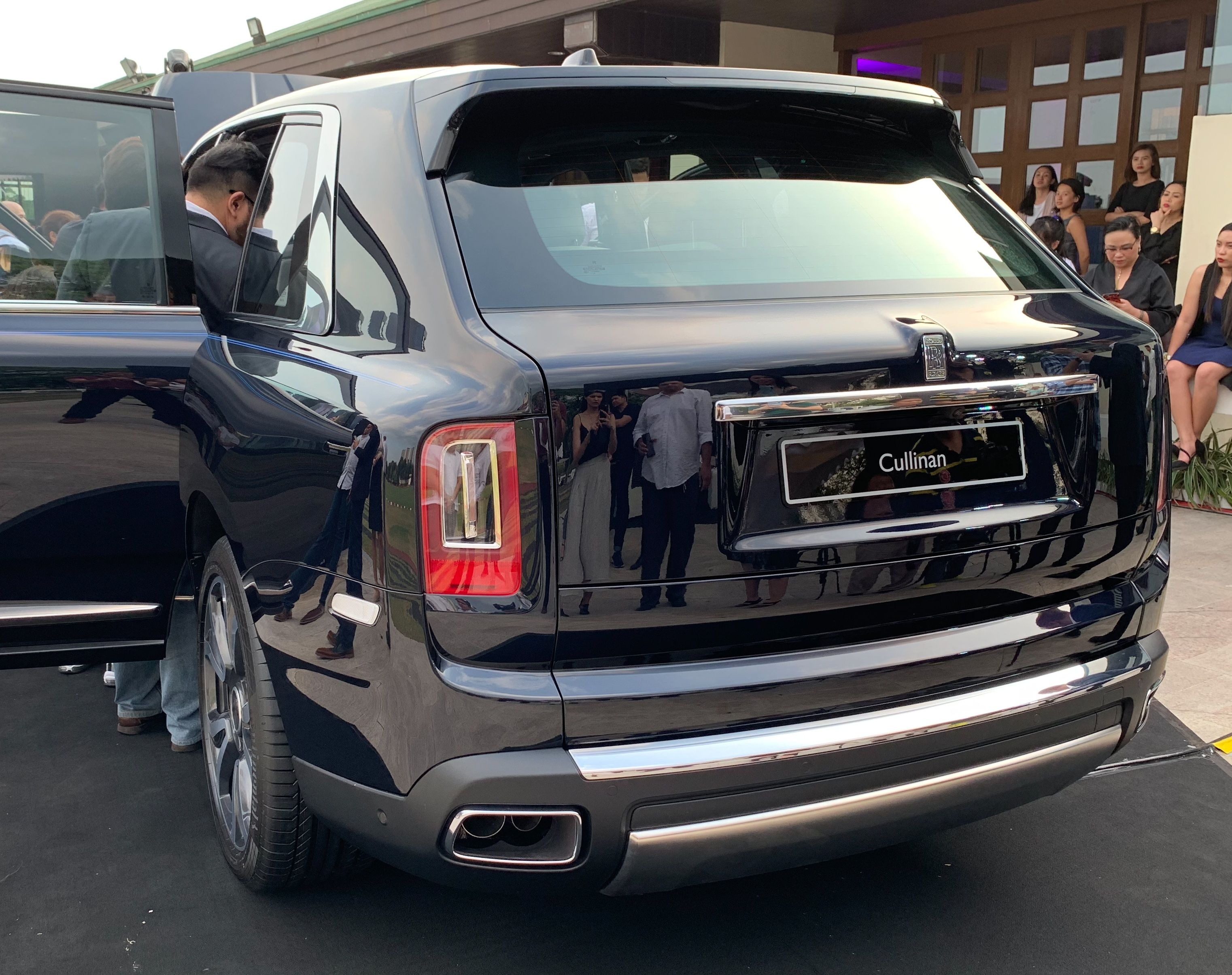 ADVERTISEMENT - CONTINUE READING BELOW
Officials declined to reveal the actual price tag of the Cullinan, but various other motoring sites peg the amount at P53 million IMAGE: Cyrian Agujo

Where no other Rolls-Royce can

But being luxurious has always been the trademark of Rolls-Royce, and the Cullinan was designed to be more than that. It wants to allow its patrons to travel to places where their regular Rolls-Royces and private jets can’t get to while retaining the comfort they’re accustomed to, and Rolls-Royce made sure the Cullinan has all the tech to do just that.

For starters, it has an aluminum space frame and a kickass V12 engine so you won’t be left wanting more power in the great outdoors. It also has a self-leveling air suspension system that uses the Cullinan’s myriad sensors and cameras to react automatically to the terrain. For the car nuts, it also has double-wishbone front axle and five-link rear axle. 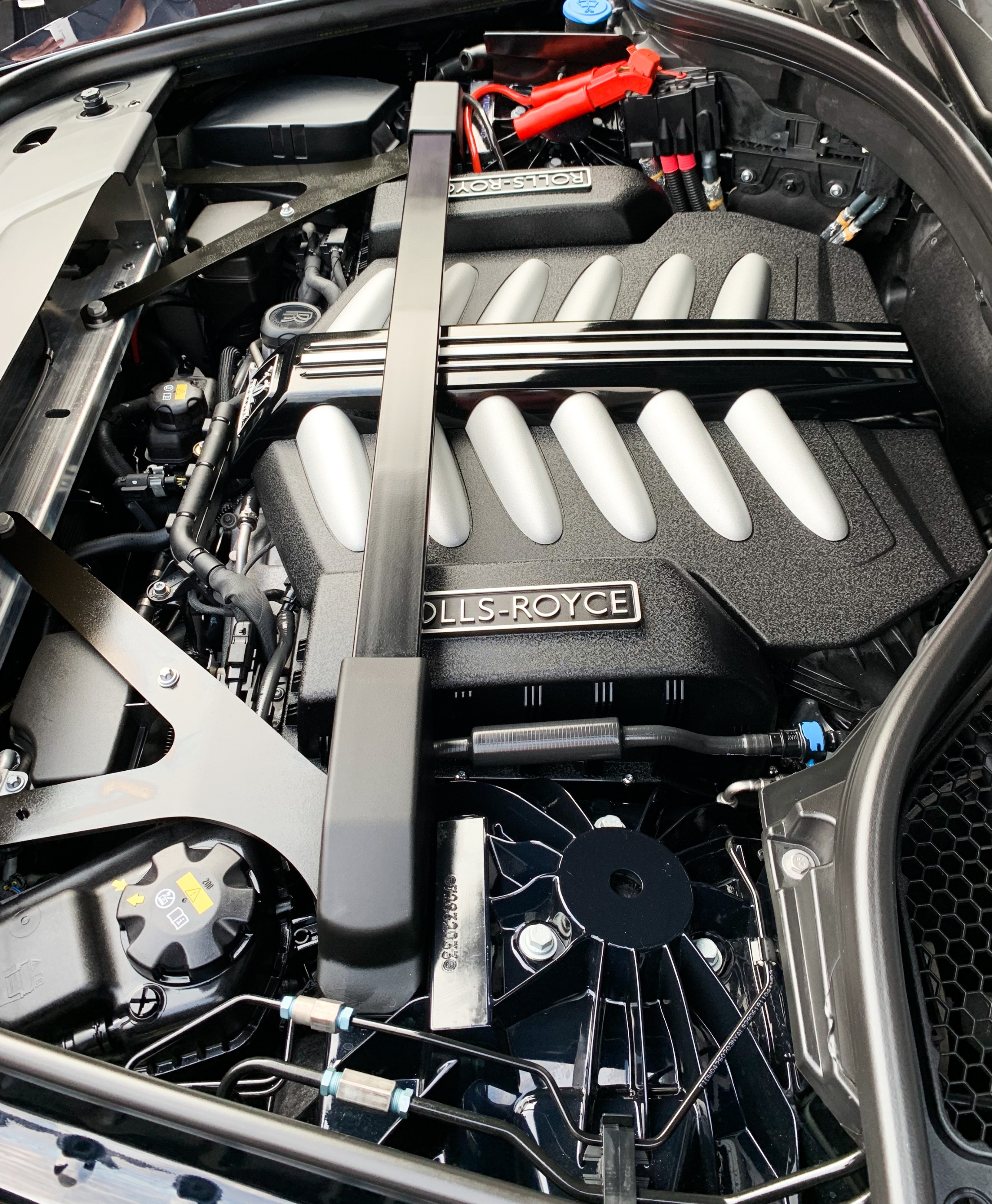 ADVERTISEMENT - CONTINUE READING BELOW
Even the V12 engine under the hood looks classy IMAGE: Cyrian Agujo

So what does this all mean? To prove that the Cullinan is a truly capable off-road machine, Rolls-Royce partnered with National Geographic and went around the highlands of Scotland, the sand dunes of Dubai, and the mountains of America. Admittedly, it still won’t be able to go side-by-side with the truly specialized off-roaders, but officials said it wasn’t meant to.

“It’s not a (Land Rover) Defender, and we didn’t want to make it like a Defender. The idea is to take the Rolls-Royce experience off-road,” says Brendan Mok, Corporate Communications for Rolls-Royce Asia-Pacific.

With a rumored price of at least P53 million, you might be wondering who the flying f will buy this thing. Well, according to Willy Tee-Ten, president of the Autohub Group which is the local distributor of Rolls-Royce, two units have already been sold even before the launch. And the demand is high enough that if you order now, you’ll get your unit in Q4 this year. Crazy, right? 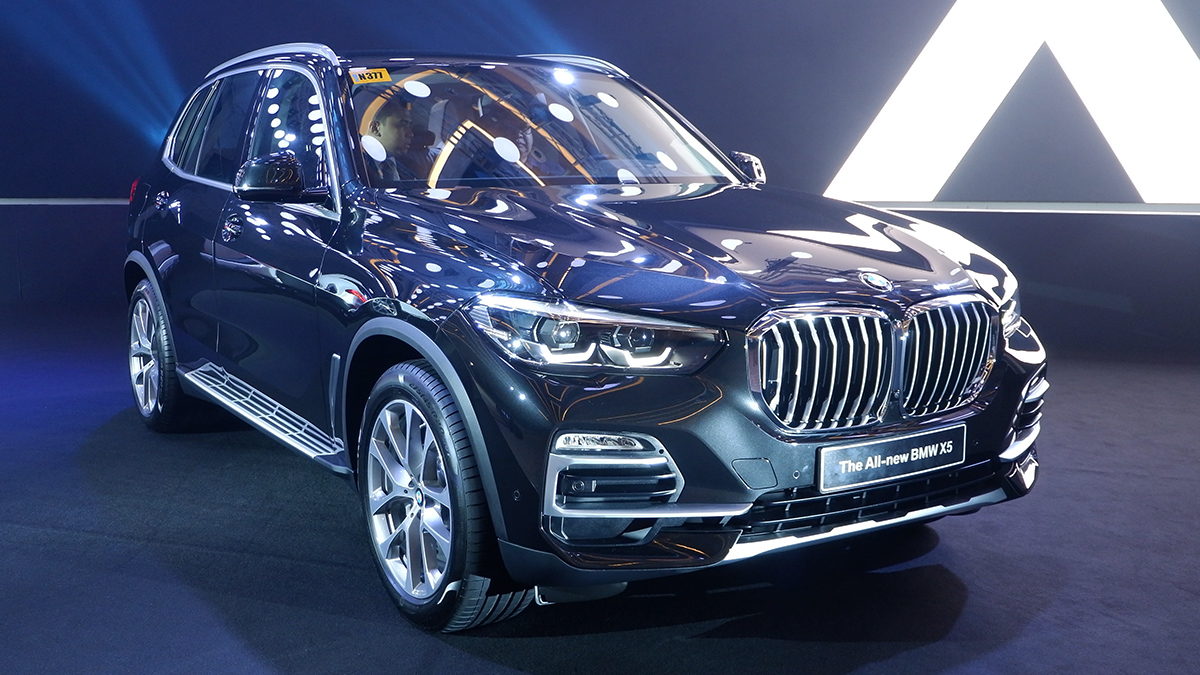 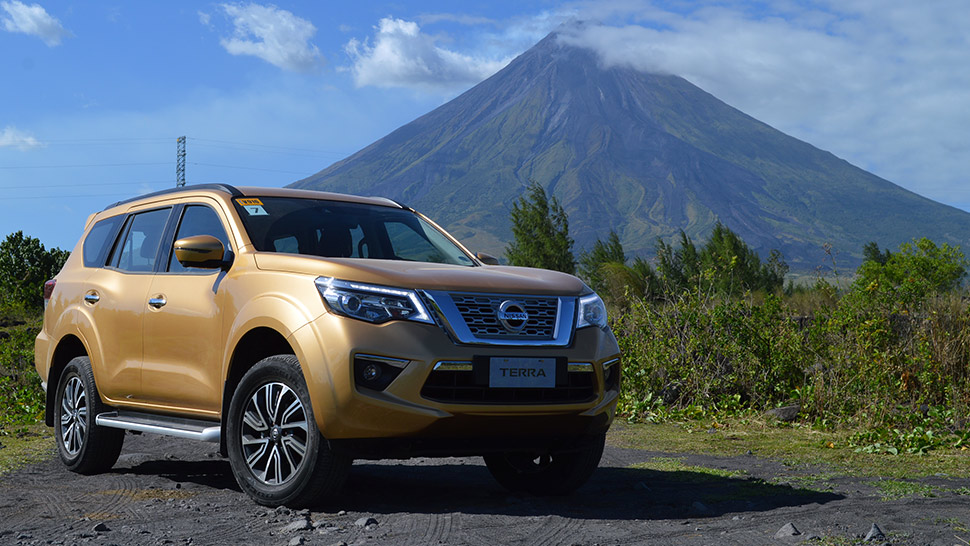 What's the Best Road Trip SUV? We Put the New Nissan Terra to the Test
All Photos
Comments
View As List