Aside from the traffic  Metro Manila residents have to face on a daily basis, one other issue drivers, in have to deal with: coding day.

It’s that time of the week when car owners have to either succumb to the skyrocketing cost of Grab rides or face the much scarier challenge of taking public transport such as buses, jeeps or the MRT just to get to where they need to be.

But with Google Maps’ upcoming feature, Metro Manila drivers may now have the chance to take out their rides even on day.

In March, Google Philippines will be rolling out an update on the Google Maps app that will allow users to input their assigned coding day and help them find routes where the traffic scheme isn’t in effect. This means that if users input a destination on the app, the suggested route will show the driver how to get there without having to worry about getting flagged down by traffic enforcers. 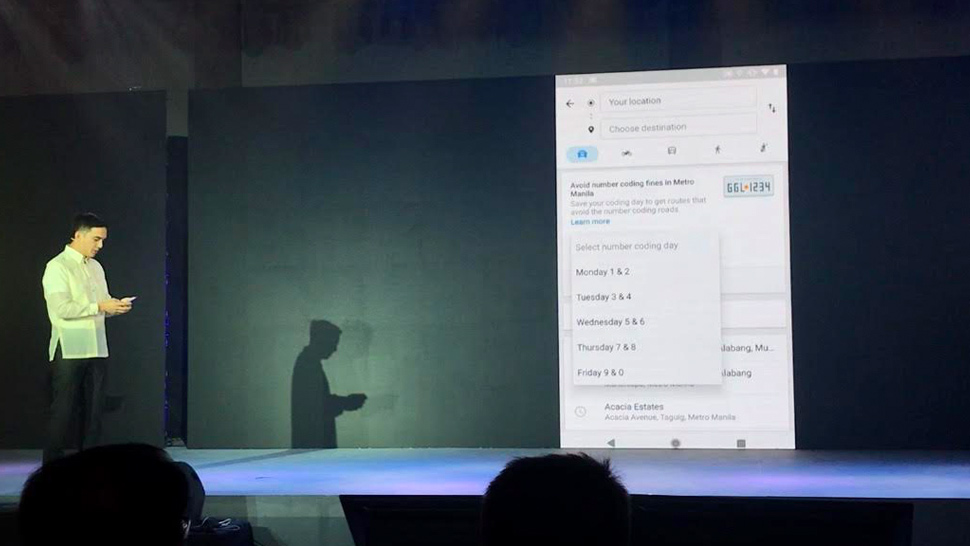 It’s a welcome update for Filipinos who frequently use the navigation app. According to Google Maps Brand Marketing Manager Nikka Arcilla, the number of Filipinos who use the app has doubled in the past two years. The tech giant has also added more pinned buildings to the navigation app, now at a million, up from 300,000 in 2017 to keep its readings more accurate.

Still, drivers may have to more time for their trips if they decide to take the suggested alternative routes of the navigation app.

When Yves Gonzalez, head of Public Policy and Government Relations at Google Philippines, demonstrated the app update to the press, he checked the suggested route for a trip from the Google Office in Bonifacio Global City in Taguig to Alabang Town Center in Muntinlupa City. The app initially suggested a route taking EDSA which would take her around 30 minutes to get to his destination. With the number coding update in effect, Google Maps recommended a route that would take her away from the restricted roads but would mean a one hour and 15-minute drive.

Google tapped the Metro Manila Development Authority (MMDA) to help the tech giant accurately map out the roads free from the number coding scheme. Finally, after a series of impractical schemes, the government agency has found a more realistic way to help drivers beat the traffic.