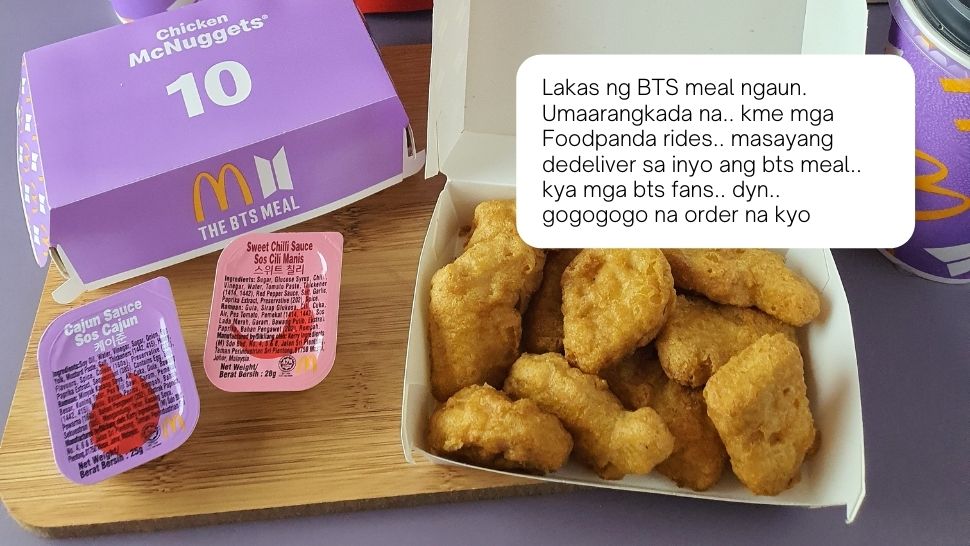 Benjamin Baetiong is a food delivery rider. On June 18 at 9 a.m., he wrote an appreciation post on Facebook, thanking people who are buying the McDonald’s BTS Meal.

(“The BTS Meal is flying off the racks. We FoodPanda riders are happy delivering your BTS Meals. So BTS fans, go go go, order now.”)

In the hours that followed, an ARMY fundraising campaign for Baetiong was started on Twitter with the hashtag #ARMYMealProject. The post aimed to thank Baetliong for his positivity about ARMY, the fan base of BTS, which has received much criticism online for the hype about the McDonald’s BTS Meal.

In light of the toxicity we face as a fandom towards some food delivery riders, this manong @foodpandaPH rider stood out the most.

“In light of the toxicity we face as a fandom towards some food delivery riders, this manong FoodPanda rider stood out the most,” read the Tweet. “At dahil sa sipag at tiyaga niya sa pagdedeliver ng BTS Meal para sa ating lahat, ang proyektong ito ay para sa kanya,”

(“Because of his dedication to his job and for delivering BTS Meals to all of us, this project is for him.”)

(To BTS ARMY, thank you very much for your appreciation. I am very grateful for your fundraiser, which is a big help to my family, especially my father who is sick. To those sending me messages, I am sorry if I am not able to reply to all of you. Thank you for everything. May you live long, BTS ARMY, McDonald's, and FoodPanda. God bless you all.”)

He continued to profusely thank BTS fans around the world who pitched in for the fundraiser.

(“Lord, thank you very much for all the blessings that came. And to the BTS fans and ARMY, my heartfelt gratitude. Thank you so much.”)