What to Read and Watch This Month, According to Jessica Zafra

JZ prepares for a month-long trip to Spain by reading Bolaño and watching a Spanish series about a gang of criminals. 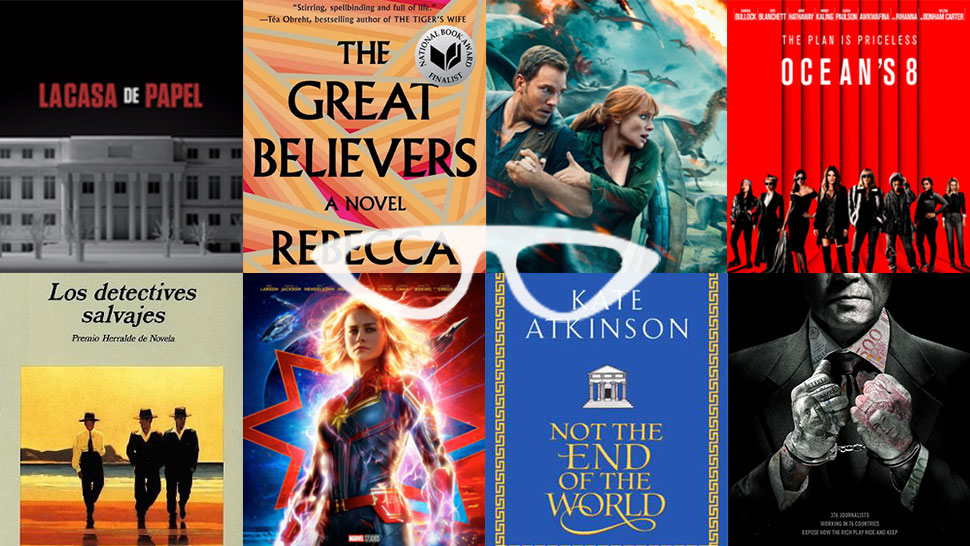 Writer Jessica Zafra prepares for a month-long trip to Spain by reading Bolaño and watching a Spanish series about a gang of criminals. Here, her top pop culture picks for TV and books in April.

Not the End of the World by Kate Atkinson

Atkinson’s first collection of short stories, fresh takes on Ovid’s Metamorphoses that take place around some apocalypse, is so clever, funny, and moving that I question the wisdom of even trying to write when someone like her is at work. And yet I try.

The Great Believers by Rebecca Makkai

A beautiful, emotionally wrenching novel that opens in Chicago in 1985, when a mysterious disease stalks the gay community, then continues in Paris in 2015, when a mother searches for the daughter who left her. The Great Believers is about so many things: the AIDS apocalypse, the failure of love, the power of art to cheat death. Despite its subject matter, it is joyful and life-affirming.

A teenage girl disappears without a trace, and the community conducts a search, deals with the loss, and somehow goes on living. A brilliant feat: a portrait of the passage of time.

Franny and Zooey by J.D. Salinger

I learned to write fiction by imitating J.D. Salinger, so when our Reading Group decided to take up Franny and Zooey for the centennial of Salinger’s birth I felt strangely nervous and defensive. What if they didn’t like it? What if they were annoyed by all the yakking, the inventories of the contents of medicine cabinets, and the name-dropping of Eastern philosophical texts? In truth even I was a little irritated, but re-reading the book with first-timers reminded me why I love Salinger. To my relief they got it, and they pointed out new ways to read it. Our next Reading Group selection is The Master and Margarita by Mikhail Bulgakov. Join us.

The Savage Detectives by Roberto Bolaño

I’m spending the whole month of May in Spain, and I figured I’d get ready by reading a major Spanish language author. It’s a long book. I’m only 50 pages in, but it promises to be a trip.

Us by Jordan Peele

If this is not as formally elegant and tightly structured as Peele’s feature debut Get Out, perhaps it’s because it is more ambitious. The class and racial tensions gripping contemporary America take the form of scissors-wielding doubles in red jumpsuits (like human MAGA caps) rising up from underground to kill their above-ground versions. Unnerving, funny, packed with enough references to keep the overthinker occupied for days, it speaks to anyone who’s ever despaired of what’s happening to their country and asked, Who are these people and where did they come from?

I came for Goose the cat (flerken, technically) and stayed for the stirring tale of a woman who has always been told what to do by men who call her weak, small, too emotional, who becomes a badass anyway—and that’s before she even acquires superpowers.

The Panama Papers by Alex Winter

We know that the rich and powerful can do whatever they want while the rest of us poor saps hope that by working our asses off we might become comfortable and safe. This documentary details how the rich and powerful screw the rest of the world by hiding their wealth and not paying taxes, and although we knew that, it’s infuriating to hear the details. You still have to hear them, though.

Marvelous! Natasha Lyonne’s character keeps dying and coming back, so she tries to figure out why it keeps happening and how to stop it. That’s all I will tell you other than that it involves a cat named Oatmeal and Chloe Sevigny.

A brown and dusty science-fiction western about a teenage girl who accompanies her father to another planet and must find a way to survive. Okay it’s not an original concept, but it’s smart and well-acted, especially by Pedro Pascal.

A highly addictive Spanish series about a gang of criminals, led by one “Professor,” who take over the national treasury and mint. The battle of wits between the Professor and the female Inspector in charge of the investigation takes some deliciously melodramatic turns, every episode ends in a cliffhanger, and good luck deciding whom to root for. Happy binge-watching.

A teenage boy whose father has just died goes to live with his father’s gay lover, to the distress of his overbearing mother. Occasionally too cute for its own good, but extremely well-acted and ultimately moving.

You like science-fiction and westerns: Prospect by Zeek Earl and Chris Caldwell. A teenage girl accompanies her father in hopes of striking it rich. Trouble ensues, and our heroine must find a way to survive on a hostile alien planet. Okay it’s not an original concept, but it’s smart and well-acted, especially by Pedro Pascal as a good-bad (or bad-good) guy.

You’re in the mood for predictable thrills, or you’re five and have memorized the different kinds of dinosaurs (then you can point out the errors): Jurassic World: Fallen Kingdom. At least Bryce Dallas Howard is now wearing shoes appropriate for running from giant reptiles.

You like heist movies and fashion, and you don’t want to think for a couple of hours: Ocean’s 8 with Sandra Bullock, Cate Blanchett, Anne Hathaway, et al taking over from George Clooney, Brad Pitt, Matt Damon et al. The fabulous cast is wasted by the paint-by-numbers script.

You’ve Seen The Trip and The Trip To Italy: The Trip to Spain (6 episodes). I love The Trip series with Steve Coogan and Rob Brydon, directed by Michael Winterbottom, but I am well aware that their dueling impressions of Mick Jagger, Michael Caine and others, their endless one-upmanship and odd bursts of song are not for everyone.

You love Chris Pine and want to see him try not to be so good-looking, or you are fascinated by serial killers such as the perpetrator of the as-yet unsolved Black Dahlia murder of the 1940s: I Am The Night (6 episodes).

Note: According to the book by his son, the prime suspect George Hodel moved to the Philippines, where he married a congresswoman, committed the Lucila Lalu murder, and occasionally snuck back to the US to commit the Zodiac murders. The series opts for a generic portrayal of eeveel.

The Legend of the Demon Cat by Chen Kaige

I do not know how one goes from directing Farewell, My Concubine to this mediocre CGI fantasy, and maybe I don’t want to know.