We've submitted entries to the Best Foreign Language Film category since its inception in 1956.

No Filipino film has ever won—or even been nominated for—an Academy Award. But that hasn't stopped us from trying. Here are all the Filipino films that have been submitted to the Academy for consideration over the years, in hopes of bagging the Award for Best Foreign Language Film (or in the case of the first entry, Honorary Foreign Language Film, the precursor to that award).

Based on the life of Mongol ruler Genghis Khan, this Manuel Conde film, which he both directed and starred in, was produced on a shoestring budget but went on to become one of the first classics of Filipino cinema. 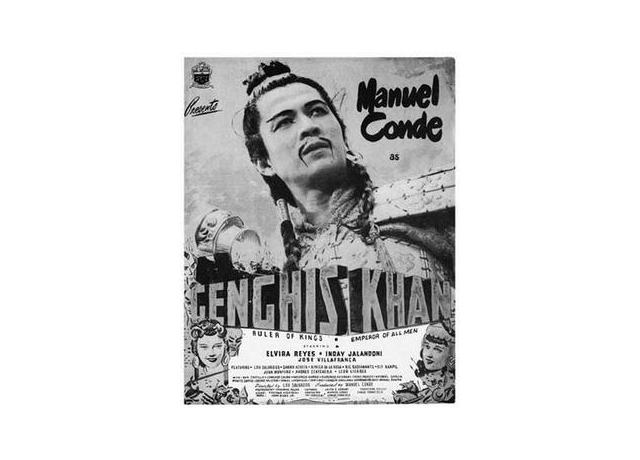 This work of post-war social realism tells the story of a young prostitute from the slums who meets a war hero in the ruined walls of the Manila Cathedral. 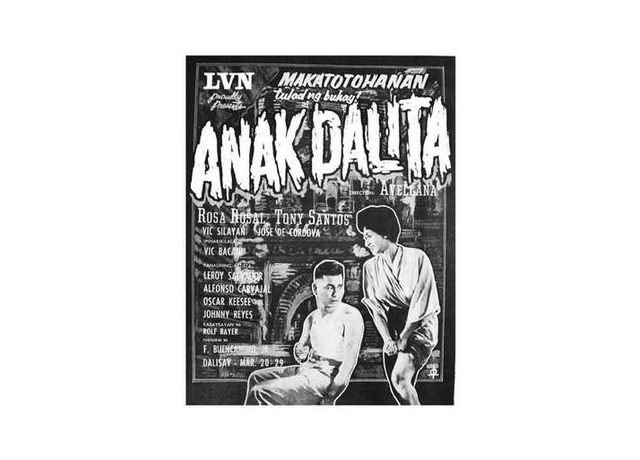 A biography of a Negros Occidental mayoral candidate who in 1951, was tortured and murdered by the private army of the provincial governor after he had refused to withdraw his candidacy. 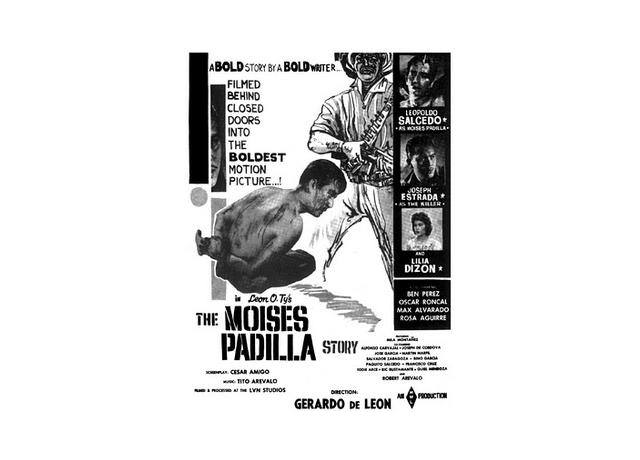 A drama that holds the honor of being the first Filipino film to be shot in color, and one of the largest productions of its time. According to American Influences in Filipino Cinema, it was also featured on the cover of American Cinematographer. 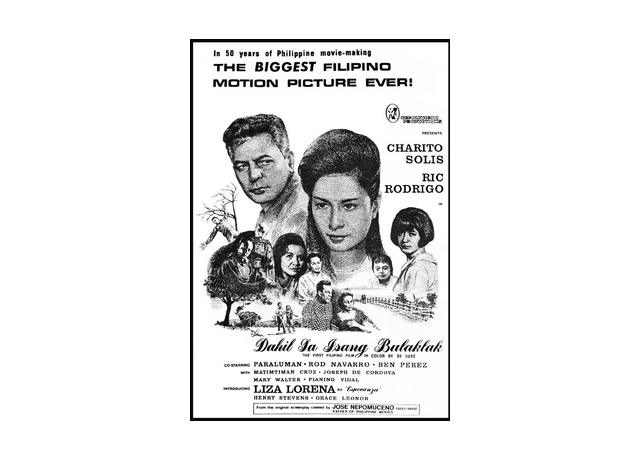 Set at the turn of the 20th century during the Filipino revolution against the Spaniards and, later, the American colonizers, the film follows a peasant taking a leap of faith to become a member of an imagined community. 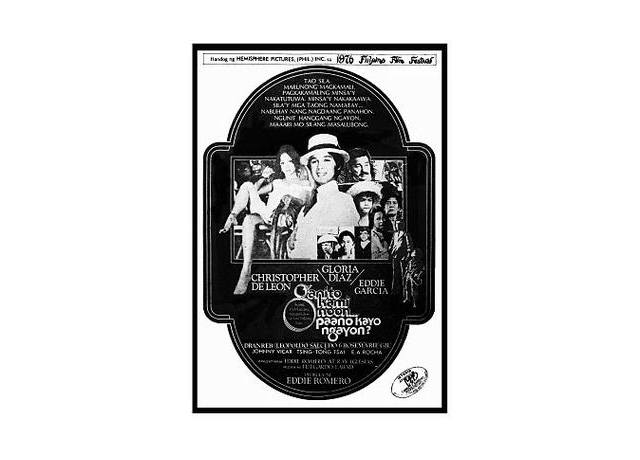 Set in the '30s but with allusions to Marcos-era oppression, Karnal tells the story of a prodigal son who returns to his family’s hacienda with his wife whom he met in the city. Shocked at her resemblance to his late wife, his father begins to lust for his daughter-in-law. 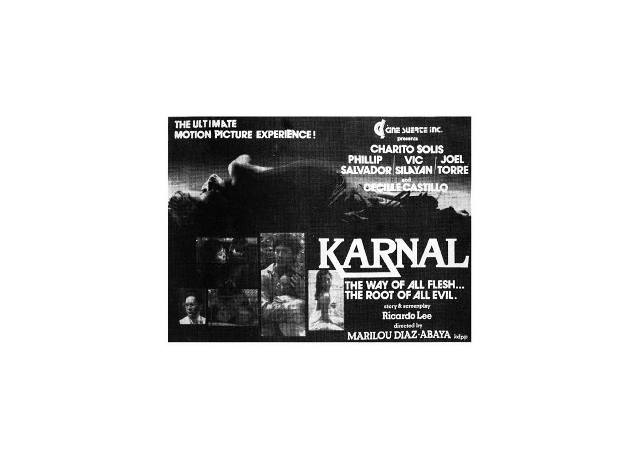 To support his pregnant wife, a blue collar worker signs a contract with his employer, promising never to join a labor union. Conflict ensues when his coworkers form a labor union and coax him to join. 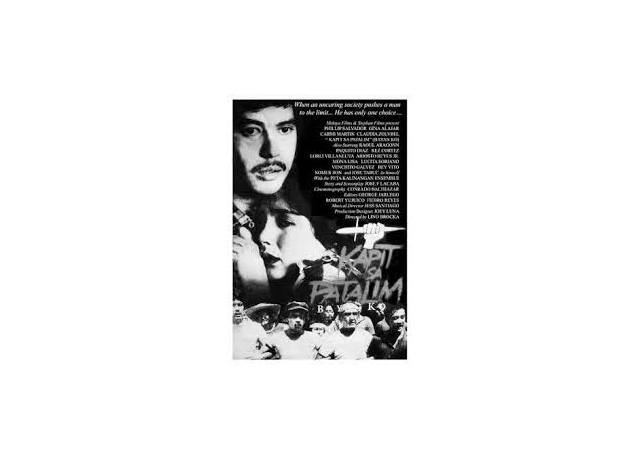 A tale of two sisters who are also bitter rivals, and how a family can collapse under the weight of greater social factors. 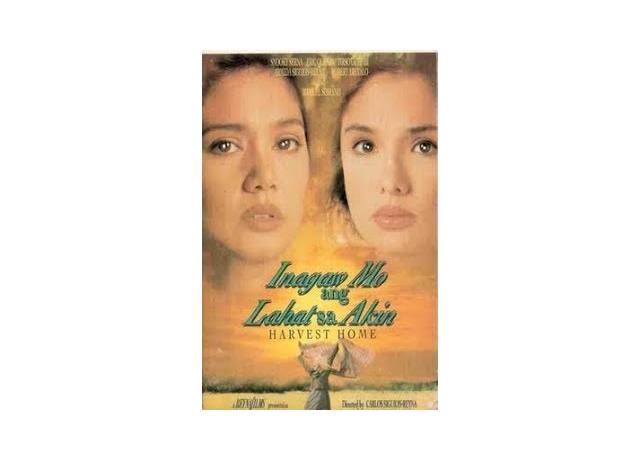 A woman who works as a sales agent by day and an escort by night struggles to support her family, when tragedy strikes. 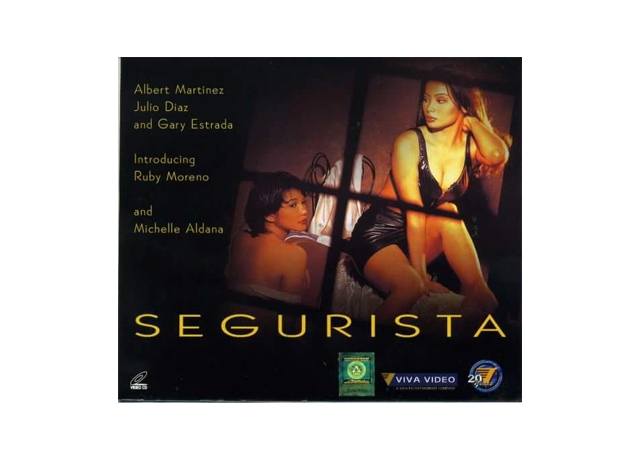 A prostitute is employed as a maid of a family of four men. They prove to be the family she never had, but to them, she is something else entirely. Together, they begin to tear each other apart.

In a remote fishing island in the 1950s, Pepito (Jomari Yllana) grows up learning the trade of his mother, Rosa (Elizabeth Oropesa), the only midwife capable of delivering the newborn babies of their community. At first, the young son doesn't mind the unusual arrangement, but as he grows older, he begins to resist the role traditionally meant only for women. 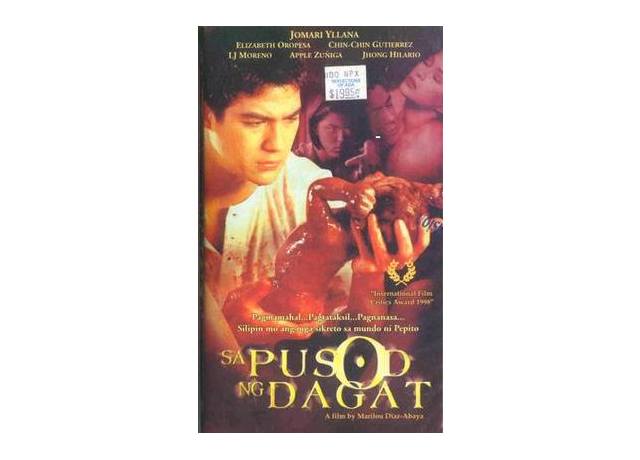 A widowed ex-cop accidentally kills a young boy trying to retrieve his kite, thinking the boy was a burglar. He tries to cover up his mistake, but doesn't know that his young son witnessed it all. As the two separately wrestle with their consciences, the neighbors find out and chaos soon ensues. 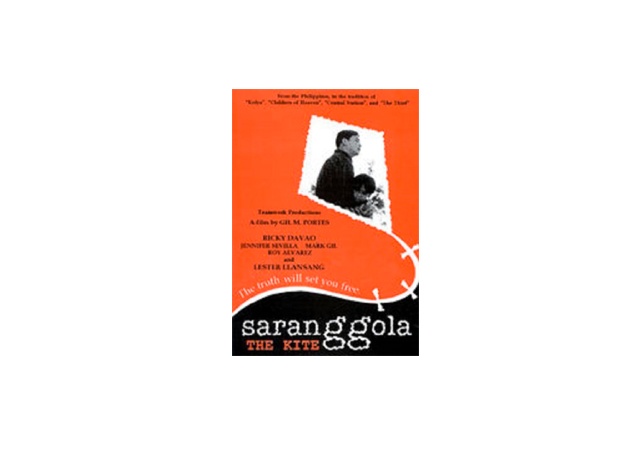 A woman struggling to make a better life for her family finds that her efforts have caused a rift between her and her children in this downbeat family drama. 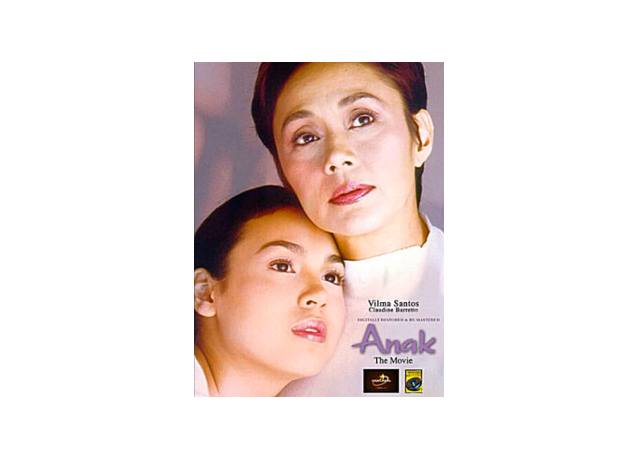 A woman agrees to serve as a wet nurse to a Japanese general's infant son after her guerilla warrior husband is arrested. A love affair develops between her and the general, and she begins to be more and more isolated from her husband and her people. 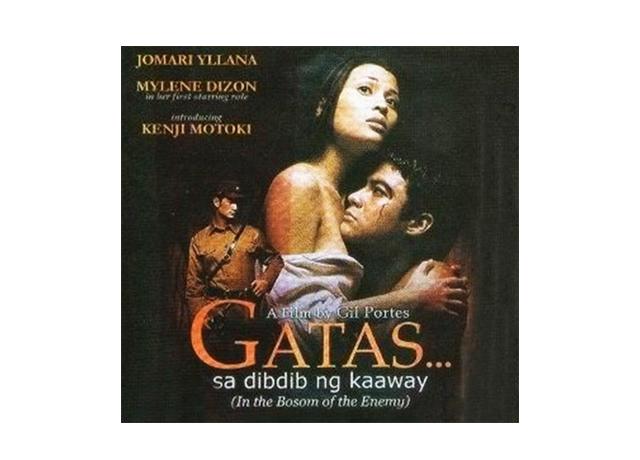 A new substitute teacher at the Malawig Elementary School comes across a funding opportunity in the form of a regional singing contest. Young and idealistic, she must navigate uncooperative school administrators, confrontational parents, and the torn children themselves in order to let their small voices be heard. 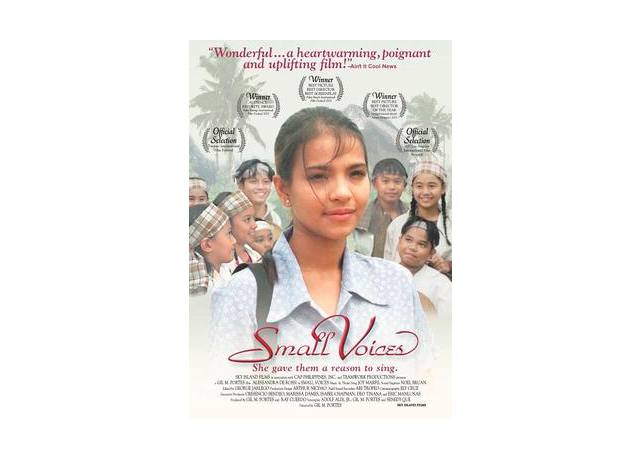 Amanda and Julian are doing their best to rear their five sons during the repressive dictatorship of Ferdinand Marcos. Though the parents view themselves as apolitical, most of their sons bristle at life under martial law and turn to various forms of activism—or to simple teenage rebellion—for release. After the family becomes the victim of extremist violence, Amanda begins to find her own dissident voice.

Choleng, Rhoda, and Stella work as professional mourners. For a fee, they attend funerals and start crying, often at the behest of those mourning a loved one. As a new assignment approaches, Choleng suffers a moral crisis, while Rhoda reflects on her prior acting career. As for Stella, she hopes to move up in the world and get back custody of her son.

A coming-of-age film about a gay teen who is torn between his love for a young cop and his loyalty to his family.

A whaleshark guide named Daniel falls in love with a beautiful but mysterious tourist Teresa. They're both dealing with their own heartaches but find themselves hopelessly drawn to each other; Daniel was left behind by his girlfriend for a rich man, Teresa a widowed breast cancer patient.

Having grown up in an illegal Taiwanese fishing vessel, Rodrigo returns to the beautiful island of Cuyo and is given from sunrise to sunset to look for Ploning, the woman who hurt him.

Bobet and his family are mourning the death of his grandfather. Throughout the six-day wake, unresolved issues and family secrets resurface, challenging the resolve of Bobet's family.

Forced to find a job as his family's breadwinner, Noy poses as a journalist commissioned to come up with a documentary following the campaign trail of his namesake and top presidential bet, Sen. Benigno "Noynoy" Aquino for the 2010 Philippine National elections.

Jocelyn, Rainier, and Bingbong are three film school graduates who are dead-set on making an Oscar-worthy film. They set out to do a quick pre-production as a courtesy call to their lead actress played by Eugene Domingo, and a thorough inspection of their film’s major location, the Payatas dumpsite. They believe they have a winning script, and the energy and drive to make their dreams come true, no matter what the cost.

Rene is a gay man who came out of the closet at age 60. Ailing in his twilight years, he thinks it is now too late for love, even companionship, and that all there is to look forward to is Death. His only companion is Bwakaw, a stray dog. As Rene waits for the day of his death, he gets the surprise of his life when it is Bwakaw who suddenly falls ill and is diagnosed with cancer.

A Filipino single dad working as a caregiver in Herzliya, Israel comes home to his apartment in Tel Aviv to celebrate his son’s fourth birthday when he finds out that the Israeli government is going to deport the children of foreign workers. Afraid of the new law, Moises and Janet decide to hide their children from the immigration police by making them stay inside the house.

The lives of three people take a turn when one of them commits a crime.

General Antonio Luna aces resistance from his own countrymen as he fights for freedom during the Philippine-American War.

Rosa's family runs a sari-sari store that also sells crystal meth. One day police officers arrest Rosa and her husband Nestor for selling drugs and asking for a bribe for the couple's release. Rosa's children, left on their own to deal with the struggles of daily life, find a way to free their detained parents.

A young farm girl wanders into the boundaries of a Philippine reservation forest. Deep within the reservation, she mistakenly shoots and kills a critically endangered and protected Philippine Eagle. As the local authorities begin a manhunt to track down the poacher of a national bird, their investigation leads them to an even more horrific discovery. 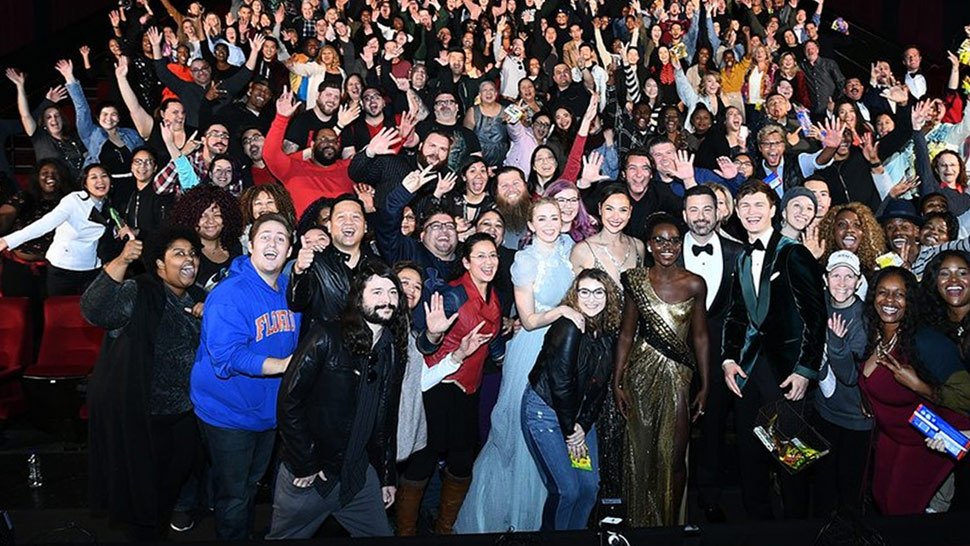