Here's what you need to know about the Children of God. 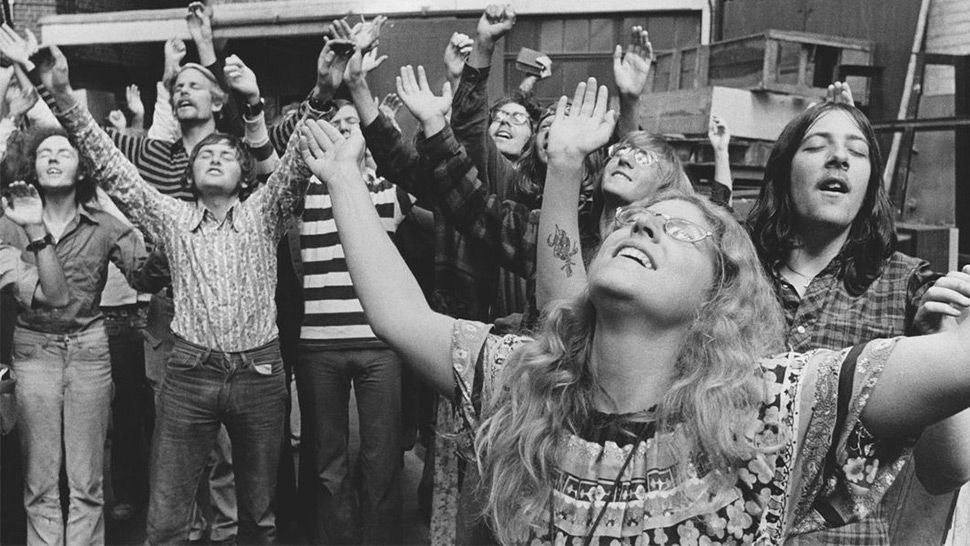 Joker star Joaquin Phoenix had an unconventional early childhood, living in Venezuela, Florida, and eventually Hollywood with his peripatetic parents and siblings Summer, Liberty, Rain, and late fellow actor River. But until Phoenix was around three years old in 1977, the family were followers of the Children of God, a cult helmed by a rogue preacher called David Berg that would later become notorious amid allegations of child sexual abuse. And he’s not the only celebrity who spent some of their early years in the group—Rose McGowan also spent part of her childhood in the cult. Here’s what you need to know.

Who are the Children of God?

In 1968, preacher David Brandt Berg founded a group initially called Teens for Christ, which at first consisted of young runaways and hippies. This church would evolve into the Children of God, which at one point counted 15,000 members around the world.
The church believed in group living and zealous proselytizing, and soon grew to include hundreds of communes. Members of these communities could be isolated, as they didn’t work—people who held real-world jobs were called “systemites”—or send their children to school.

Berg’s church melded worship of Jesus Christ with ’60s-era free love, and preached a fairly standard cult leader prophecy—the apocalypse was coming, and soon. This doomsday predication encouraged his followers to live hand-to-mouth rather than making long-term plans; ex-members later told The Guardian of begging for alms and subsisting off of donated food.

Members of the Children of God dance in Toronto in 1972.

What are the allegations against the group?

The cult earned notoriety for its sexual practices, which included what Berg dubbed “flirty fishing,” and which found him ordering female followers to have sex with men in order to bring them into the cult. In 1979, he reported that “flirty fishers” had added 19,000 members to the group’s ranks. "It was religious prostitution," one of Berg's daughters told Timeline in 2017.

Joaquin Phoenix told Vanity Fair that the introduction of the "flirty fishing" policy drove his parents to leave the group. "They got some letter, or however it came, some suggestion of that," he said, "and they were like, 'Fuck this, we’re outta here.’"

His mother, Heart Phoenix, told the magazine that "it took several years to get over our pain and loneliness" after leaving the group. Rose McGowan’s family also escaped the cult during her childhood.

Members of the group sit down to a communal meal in 1974 California.

Some in the cult reportedly extended its sexual policies to children, allegedly permitting and even encouraging child sex abuse. Berg himself was accused of sexual abusing young girls, including his daughters and granddaughters. "It definitely wasn’t a safe place to grow up, especially if you were a girl," one former member told The Guardian in 2017. "Close friends of mine growing up were abused and raped."

In 1993, a former member of the group named Ricky Dupuy appeared on Larry King Live, and told the host that he’d been ordered by the group to rape a 10-year-old. Dupuy, like other ex-members of the group, later committed suicide.

David Berg died in 1994, and at the time of his death he was under investigation from both Interpol and the FBI. His wife, Karen Zerby, inherited leadership. But the cult landed in the headlines again in 2005 after their son, Ricky Rodriguez, killed himself and another former member of the group.

Rodriguez left the cult in adulthood, and his wife told The Times that he wanted his mother “prosecuted for child abuse.” He also supported other women’s accounts that Berg had sexually abused his own daughters and granddaughters.

At the age of 29, Rodriguez invited one of his former nannies—a woman who appeared in the book documenting his alleged abuse—and stabbed her to death before killing himself. His wife gave reporters a video he recorded the night before the murder-suicide. "He said he saw himself as a vigilante avenging children like him and his sisters who had been subject to rapes and beatings," wrote The Times of the footage.

A spokeswoman for the group recently told the BBC that, "although the Family International has apologized on a number of occasions to former members for any hurt, real or perceived, that they may have suffered during their time in our membership, we do not give credence to tales of institutionalized abuse."

What is the status of the group now?

In 2004, the church again changed its name to the Family International. In the years following Berg’s death, the group relaxed many of its demands of its followers in an apparent attempt to boost declining membership. Followers are now allowed to live in private homes and work outside of the cult. In 2009, the leadership announced that they no longer believed the apocalypse to be imminent. The church still exists, and though its website says that the group underwent a “reorganization in 2010 as an online community,” it claims to have 1,700 members.

El Camino: Who's Alive, Who's Dead, and Who's TBD After The Breaking Bad Finale?