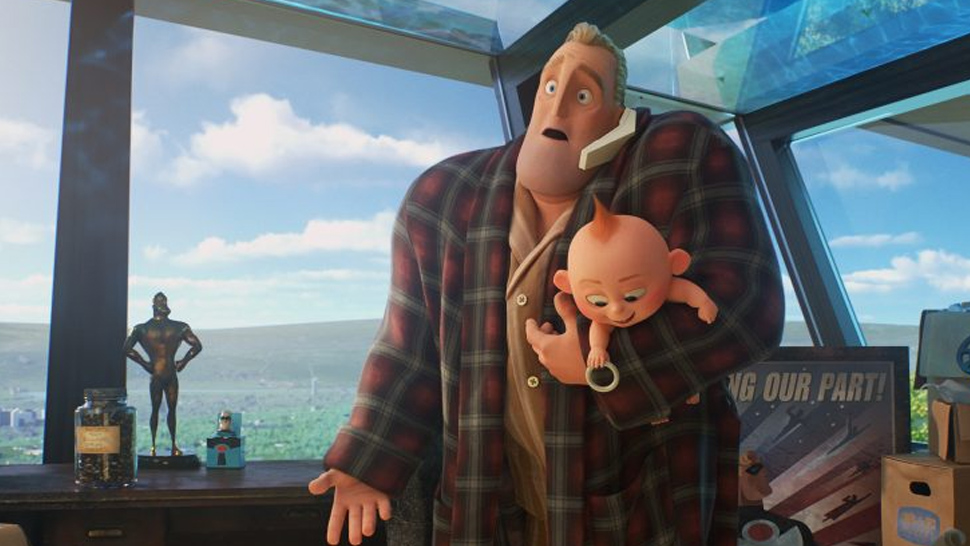 The Incredibles 2 is as much a superhero film as it is an ode to parenting and finding the perfect work-life balance—and it’s glorious.

Fourteen years after The Incredibles catapulted writer-director Brad Bird into the upper echelons of animation, Pixar has come out with a sequel that explores the other side of superhero life. Set right after the events of the first film, the Incredibles are spurred into action when supervillain the Underminer threatens the surface world. In the course of their fight to stop him, the superheroes cause tremendous property damage. This hearkens back to the first film, where superheroes were outlawed because they ostensibly cause more harm than good.

Their government ally Rick Dicker (voiced by Jonathan Banks) informs them that the government program relocating supers has been shut down, and the family faces the dilemma of having to once again go back into normalcy. Helen (Holly Hunter) and Bob (Craig T. Nelson) Parr discuss which parent will be going back into the workforce and who gets to stay at home with their kids Violet (Sarah Vowell), Dash (Huck Milner), and baby Jack-Jack. 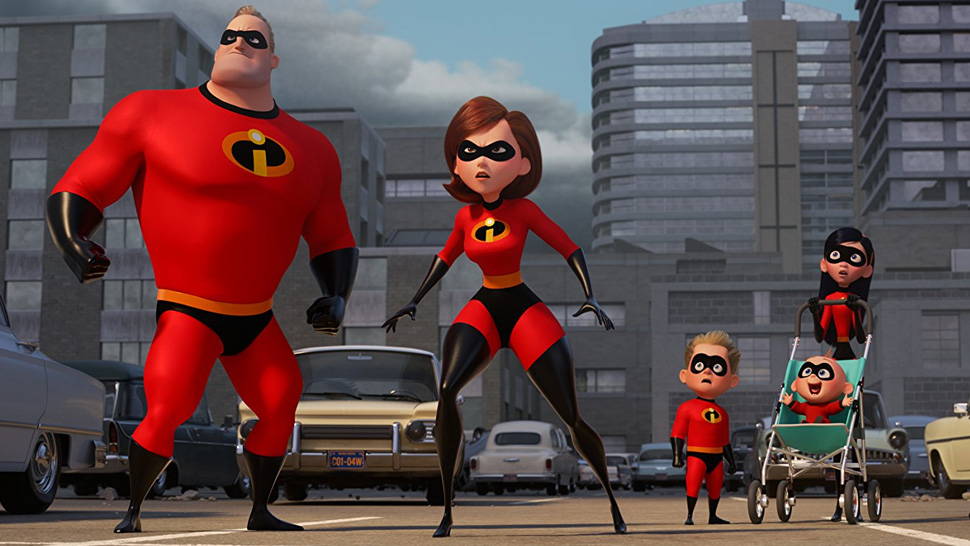 Enter media magnate Winston Deavor (Bob Odenkirk), co-heir to telecommunications company DEVTECH along with his sister Evelyn (Catherine Keener), who proposes a solution to the Parrs that aims to change the public’s perception of superheroes to restore their legal status, since the Deavors' late father was an avid supporter of superheroes, and Winston is intent on restoring them to their former glory. Mr. Incredible, who was never able to let go of the superhero life, is excited to get back to superheroics—but is told that the job needed to be done by Elastigirl.

What ensues is a clever exploration and commentary about parenting, and the dynamics of families with working moms and stay-at-home dads. Mr. Incredible struggles with the seemingly emasculating arrangement and slight tension that arises from playing second fiddle to Elastigirl, who excels at superheroics and very quickly endears herself to the public. But Bob realizes that solo parenting isn’t at all easy and proves to be more than a match for even Mr. Incredible himself. Meanwhile, Helen, who needs to perform her superheroics in another, more high-profile, crime-filled city, misses out on Jack-Jack’s milestones (in his case, the emergence of a multitude of powers previewed at the end of the first film).

It’s a deep and beautiful ode to parenting. Fashion designer Edna Mode, voiced by Bird himself, puts it best: “parenting, done properly, can be heroic.” As Mr. Incredible struggles with all his might to balance the adolescent troubles of Violet, the studies of Dash, and the unpredictability of Jack-Jack’s powers, all while his wife risks her life saving other people, we see that it’s a not-so-veiled metaphor for the struggles of all parents and the sacrifices they make for the family.

Their arch nemesis for this film is a mysterious, mind-controlling villain called Screenslaver who manages to enslave people through monitors. It’s an on-the-nose and apropos commentary on how we’re all slaves to what we watch. There’s a note of predictability to Screenslaver’s identity here that won’t surprise anyone, but it’s the motivations behind the villain that infuses the story with the subtleties that other superhero films lack.

The long-standing argument about whether superheroes do more harm than good is valid, but ultimately we understand that the world needs more heroics, not less. Dicker nails it with a profound statement in the beginning: “Politicians don’t understand people who do good things just because it’s right.” Which explains so much of the Incredibles' world’s legislation aimed at curtailing superheroism. The truth of it is chilling, especially in these times where we see our own governments seemingly working against the good of the people. 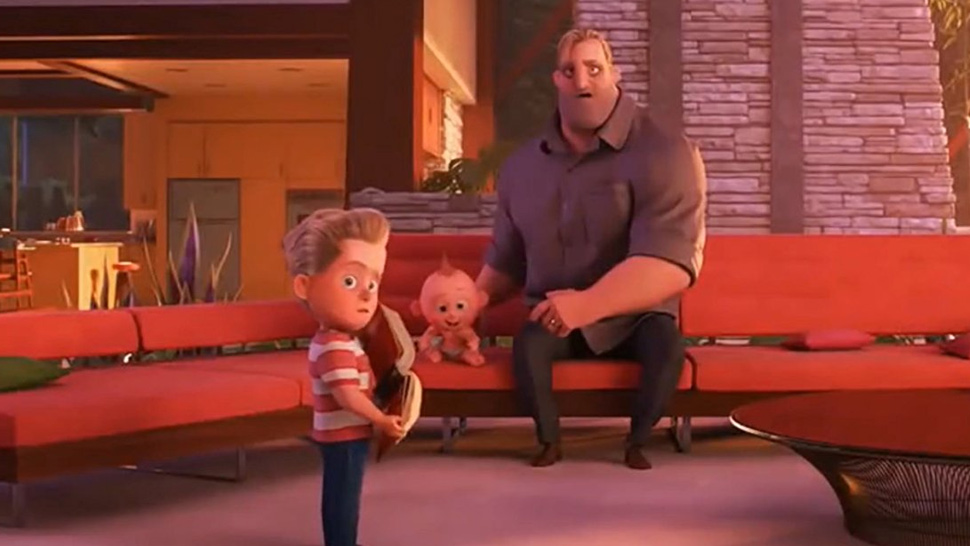 ADVERTISEMENT - CONTINUE READING BELOW
More than just your standard superhero cartoon, 'The Incredibles 2' is a commentary on the dynamics of modern family life, especially when it comes to the sacrifices parents make for their family (sniff). IMAGE: Pixar

The film is darker and grittier than the first, embracing the film noir aesthetics and sensibilities of the era that The Incredibles hearkens to. It’s slapped with a PG rating, which is actually unusual for a Disney Pixar film, and it’s not just because of the cartoon violence that comes hand in hand with superheroes battling super villains, but because the themes are mature and a lot of the nuances are intended for adults rather than the kids.

That said, it’s an absolutely enjoyable movie for the entire family, outdoing even the first film, because this time around we get to see even more superheroes as Elastigirl’s efforts have encouraged other supers in hiding to don their tights (no capes!). Some notable new characters include the fangirling Voyd (Sophia Bush) and telekinetic Krushauer (Phil LaMarr). It’s exciting to see the Incredibles’ world expand.

Bird is a master storyteller, the genius behind the cult classic Iron Giant and award-winning Ratatouille, and The Incredibles 2 continues in this remarkable vein. It’s a deeply personal statement from Bird, who had missed parts of his third son Jack’s infancy during the production of The Incredibles. In past interviews, he mentions that babies represent raw potential, and he explores this with gusto in the sequel (just like his alter ego Edna) by giving Jack-Jack a plethora of exciting abilities that provides many of the film’s hilarious moments.

If The Incredibles 2 has any fault, it’s that it feels like there’s too much going on at once. It’s a reflection of parenting and family life, where there always seems to be so much going on it can be overwhelming. It’s a reminder that not even superpowers can make juggling work and family life an easy task. While the first film portrayed Mr. Incredible in a traditional breadwinner role, the sequel flips the script and establishes Elastigirl as more than equal to her husband’s status both as a superhero and provider for the family.

Even the short film that precedes The Incredibles 2 is a must-see animation that gives homage to parenting. Featuring a dumpling that comes to life, Bao is a story that should evoke memories and stir emotions for every Asian parent. It’s classic Pixar, packing tremendous sentimentality and heart in such a short story. It’s a touching and wonderful prelude to what is one of Pixar’s best films to date. 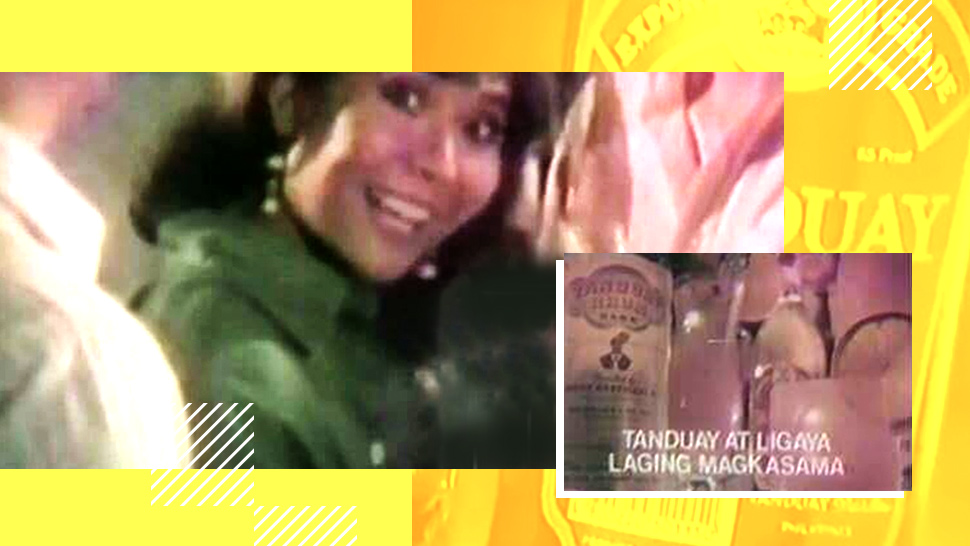 You Can Tell This Tanduay Ad is Ancient, Because It's So Damn Wholesome
All Photos
Comments
View As List