The 5 Movies Every Man Must See, According to Michael Caine

He's been in a few of them.

From his iconic role as '60s seducer Alfie to his recent turns as Batman’s loyal butler Alfred, Michael Caine has conquered the film world and achieved full-blown legend status along the way.

Fronting new documentary MY GENERATION, which hits cinemas this week, we caught up with the man who put London’s East End on the cinematic map…

What do you miss most about London in the sixties?
I think it’s shut down a bit socially. Not that I go out, I’m 85! I’m not at the discos anymore. But the younger generation now, who I think are fabulous, they have the internet and that’s changed everything.

If I wanted to discuss something with a producer [in the '60s], I’d have to go to a restaurant. We’d have dinner and we’d discuss it. Now, you sit at home and they send you a script on your telephone, you know what I’m saying?

I think the internet is the most amazing thing and I use it like hell myself. But what it was with the '60s was personal communication, you know? Everybody went everywhere to meet everybody. Now, everybody has internet where they don’t have to go anywhere. You can sit on the chair, you can sit on the toilet and speak to anyone everywhere in the world.

You became an icon with the role of Alfie, but who was your idol at the time?
Marlon Brando and Humphrey Bogart. Those were the two. I thought Marlon was fabulous.

What are five films you think every man should see?
Casablanca—that was Humphrey Bogart and it’s my favorite film of all-time. The Third Man, which is a Carol Reed spy movie. Marlon Brando’s On the Waterfront and Peter O’Toole in Lawrence of Arabia, which I thought was a wonderful film.

I think anything done by Christopher Nolan, and I’ve been in all of his movies! But I think Chris Nolan is the greatest movie director. I think he’s the new David Lean. I’m his lucky charm, he says! I am lucky, because Dunkirk has taken over half a billion dollars. 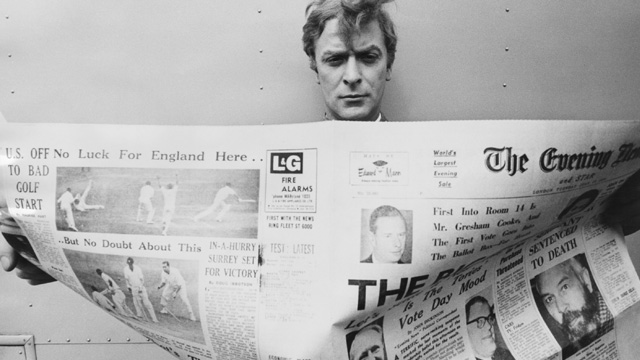 Which of your films would you like to see return to cinemas for today’s movie-goers?
Well that would be Alfie. But a more recent one, my favorite one, is Dirty Rotten Scoundrels. It’s the funniest movie I ever did and the happiest movie to make. We shot on the French Riviera, where it was set, which is one of my favorite places in the world, and they rented a villa for me in the summer.

If you weren’t an actor, what do you think you would have done?
If I could have got an education, which in my class and circumstances was unlikely, I would have loved to have been an architect. I know everything about architecture and buildings. I’m talking to you from a flat in Chelsea Harbor now, and I can see the whole of London and all the architecture going on around me, and the harbors being built. As I’m talking to you, all I can see is cranes for things being built, and I’m so happy to see that because in my childhood, I was bombed out. They just flattened London.

What would you say is the single best thing about your generation, and the worst?
The best thing about it is that we didn’t know what we were doing, so there was no pressure. We just did what we wanted to do, you know? It all turned out to be something entirely different; to be an era of freedom, but we didn’t know that. We just went ahead and did it. Writers just sat down and wrote something.

The worst thing? We drank a lot! Which seemed bad, but it wasn’t as bad as we thought it was because then came the seventies and the drugs. That sort of finished the '60s.

About The Author
Rachel Cunningham
View Other Articles From Rachel
Get The Latest Updates From Esquire!
Subscribe to our newsletter!
Latest Feed
Load More Articles
Esquire Money