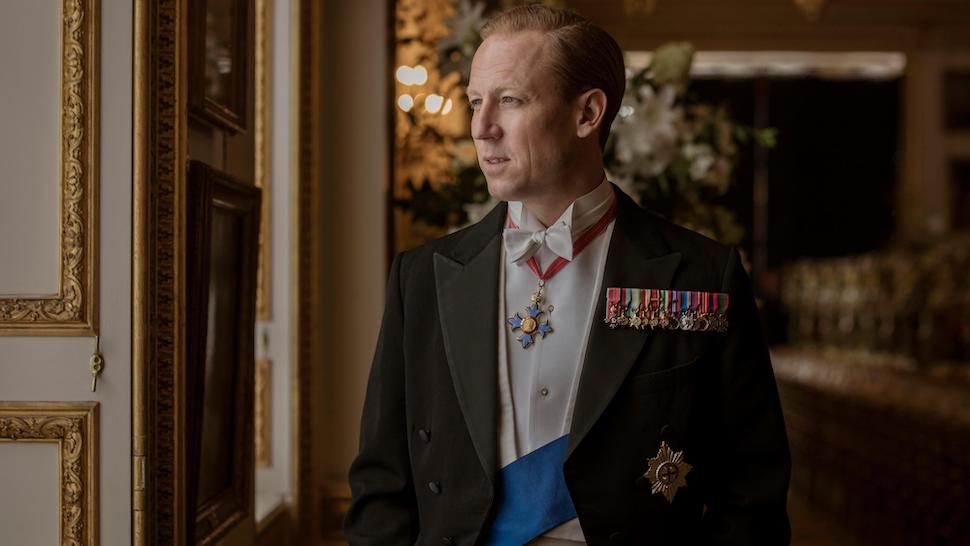 Tobias Menzies is looking down from a balcony at a group of breathless young actors racing up the grand staircase over and over again. They’re filming a pivotal, symbolic scene for what is to be “Moondust,” the seventh episode of the third season of The Crown.

While the staircase race is fiction, the Apollo 11 astronauts did make a stop at Buckingham Palace, and Philip—himself an aviator—was said to have had a lot of questions for Neil Armstrong, Buzz Aldrin, and Michael Collins. In Netflix’s reimagining, though, the event sets off somewhat of a midlife crisis for the royal.

“At this point in the show, he’s middle-aged, and as with a lot of people in middle age, a lot of questions come up, about what they’ve done with their lives and the decisions they’ve made,” says Menzies. “What Philip’s struggling with is the unlived life that he sees in these men. Maybe what he’d have liked to be, or aspired to be.”

“What Philip’s struggling with is the unlived life that he sees in these men. Maybe what he’d have liked to be, or aspired to be.”

Prince Philip, the Duke of Edinburgh, was beginning a career with the Royal Navy when he married Elizabeth, then the heir apparent to the throne. After their marriage, the young couple was stationed in Malta, where he served as first lieutenant on board the HMS Chequers, a destroyer in the Navy’s Mediterranean Fleet. A year later, he was promoted and given command of the frigate HMS Magpie. Additionally, he was a pilot who had logged 5,150 flying hours by the time he was 70 years old.

“You’ll see that he was a man of action,” says Menzies. “He would’ve had a career in the Navy, had life been different, he’d have a very different existence rather than being plugged into this, this Organization, and it took him a long time to find his role within that.”

Though Menzies—who took over the role from Matt Smith for the current season of the Netflix series—portrays Philip with a stern demeanor and a stiff upper lip, there is a hidden fire to the royal. “I think it goes to the heart of what the show is about, about people who are both not really able to express themselves,” Menzies says.

“In terms of the institution, they’re meant to be figureheads, not meant to have opinions…They seem to be of their class and are relatively armored. Emotion is not their strong suit—or expression of emotion is not their first thing,” Menzies corrects himself.

“I would say Philip is someone who is emotional, when you see him in interviews, there’s a lot going on even if he’s not saying it, it’s in his face, his jaw—I think he’s quite an emotional person. But he doesn’t allow himself, because it’s complicated to show those emotions. When he expresses them, how he expresses them, that becomes the music of it, I suppose,” he muses. “I think that’s what makes him one of the most interesting people in the show, I think he’s hot. You can say that the queen is much cooler, but he’s definitely not that. He wrestles with masculinity, his emotions and what it is to be, you know… the very spine of him is that he’s an alpha male who’s spent his life walking a few steps behind his wife and I get the sense that it’s a challenge to him, it doesn’t come naturally. He’s used to running the show.”

The actor expresses a good deal of admiration for the real-life Prince Philip: “He’s actually been quite impressive in how he’s taken that on…Media is definitely guilty of caricature—what he really is is more complex. I kind of admire his impatience with the kind of flummery and all the stuff,” Menzies says. “I can certainly imagine much less interesting versions of the role.”

The third season of 'The Crown' is now showing on Netflix.