Despite rainfall earlier in other parts of the metro, in Fort Santiago, on the late afternoon of October 19, everything was just right. The weather was warm, a bit humid but bearable and nowhere near scorching hot. The sky was clear and the rainclouds were gone, only fluffy white patches scattered on a blanket of baby blue. It was as if the gods made a pact for fair weather to make it easy for everyone who joined the walking tour.

Carlos Celdran’s Walk This Way tour was never but an excuse to stroll around Intramuros and gawk at its centuries-old architecture and the scenery beyond its walls. Part walking tour and part history lesson, it was a deep dive into Manila’s rich and colorful past, with detailed accounts of the Spanish and American Occupation. But unlike the history lessons we had in high school, it was far more entertaining. It was, as Celdran himself put it, performance art in disguise.

What better way to pay tribute to a man than by carrying out an aborted mission on his behalf, even if it would be the last? What better way to remember him than by tracing his footsteps? Literally, in this case. Writer and actor Gabe Mercado wore a dead man’s hat and quite a few other hats as the guide for He Walked This Way, a tour in tribute to his friend, the late cultural activist, Carlos Celdran.

Celdran may not have been there physically, but he was there in the spirit of the crowd, in every snarky comment, in every costume, in every laugh.

It’s no secret that the Catholic Church was the highest order during the Spanish Colonization, and the imposing structures of the seven churches built in Intramuros at the time—the Manila Cathedral, San Ignacio, San Antonio, San Francisco, Sta. Rosa, Sta. Clara, and San Agustin—were accurate representations of the Church’s stature.

“The Sto. Domingo was even bigger—nine stories high. And Fort Santiago—little Fort Santiago—two stories high. Which kind of shows that the Philippines was built not for the King of Spain, but for the Vatican,” said Mercado as he told a story on Spanish conquistador Miguel Lopez de Legazpi.

“It was all for the satisfaction of so many souls.”

Mercado, a comedian, was a natural.

How much do you remember about our national hero, Jose Rizal? Do you still know his full name—José Protasio Rizal Mercado y Alonso Realonda? What to you is a real hero, and how much did you learn about Emilio Aguinaldo and Andres Bonifacio in school?

Probably not as much as what has been depicted in period films as of late or was detailed through Mercado’s narratives during the tour.

Going back into Manila’s eventful past also meant digging all the dirt buried with it. More than marked dates on an old calendar and milestone events or European-inspired architecture and names of important figures, there are stories and symbolic meanings that were only ever mentioned in hushed conversations. Many of these were censored, never making it to history textbooks.

Possibly every tourist who’s been to the MacArthur Leyte Landing Memorial National Park in Leyte has tried taking a photo with the famous bronze statues of General Douglas MacArthur and company in the background. If the same tourists joined the walking tour last Saturday and listened intently to the anecdotes on MacArthur’s cowardly demeanor or the accounts of what happened when the Japanese took over Manila, and learned how many Filipino lives were lost before MacArthur said “I shall return,” they would have probably regretted taking those tourist photos. 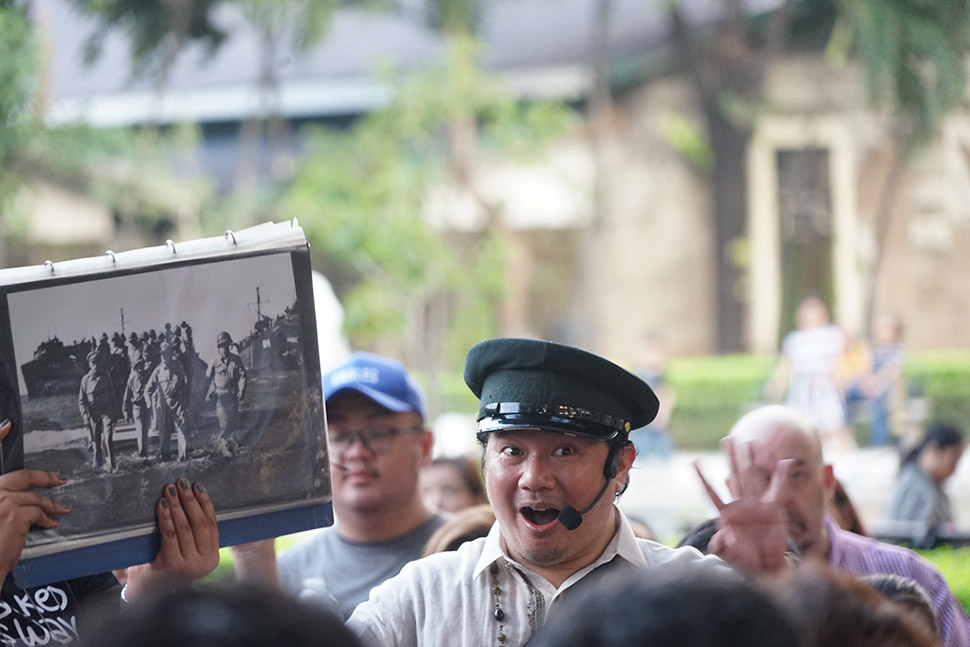 How ‘Filipino’ is our culture?

The Philippines is often referred to as a melting pot of eastern and western cultures. And no Filipino can contest this, seeing how the Spanish, the Americans, the Japanese—and yes, even then, the Chinese through the Manila Galleon Trade—have invaded the Philippines, influencing how Filipinos live.

Evidence is everywhere, the usual suspects being the adoption of English as the second language; the names of colonizers as names for streets; multiracial bloodlines; westernized fashion; and the merry mix of textures and colors in Filipino food, with spices and flavors borrowed from various cuisines.

Having been influenced by one foreign country after another, our culture has become—as Mercado said at one point—as colorful as the -halo, a well-loved Filipino dessert which, incidentally, was served to all walking tour participants at Plaza San Luis later in the evening.

The tour ended a little after 6 p.m., but people were invited to proceed to Puerto Real Gardens at 7 p.m. and watch musical performances by Celdran’s friends and supporters.

We can all have different political and religious beliefs, agree to disagree on national issues, and view things from opposite sides of the fence. You can love or hate Carlos Celdran, but if you’ve joined any of his walking tours at least once or you were one of the roughly 350 people who signed up for Mercado’s version of the tour, you would have to agree that Walk This Way is probably Celdran’s greatest legacy. No one was ever as passionate, as invested, and as animated in sharing everything he knew about this country’s history.

It was always more than a history lesson done on foot. And while the wealth of information—facts and figures, anecdotes, insights—gained is certainly valuable and makes for a good conversation piece, there is an important lesson that, cliché as it may sound, rings true: History repeats itself.

People have committed the same mistakes throughout history. And in our case, these mistakes have sacrificed thousands of innocent lives and compromised our sovereignty as a nation. 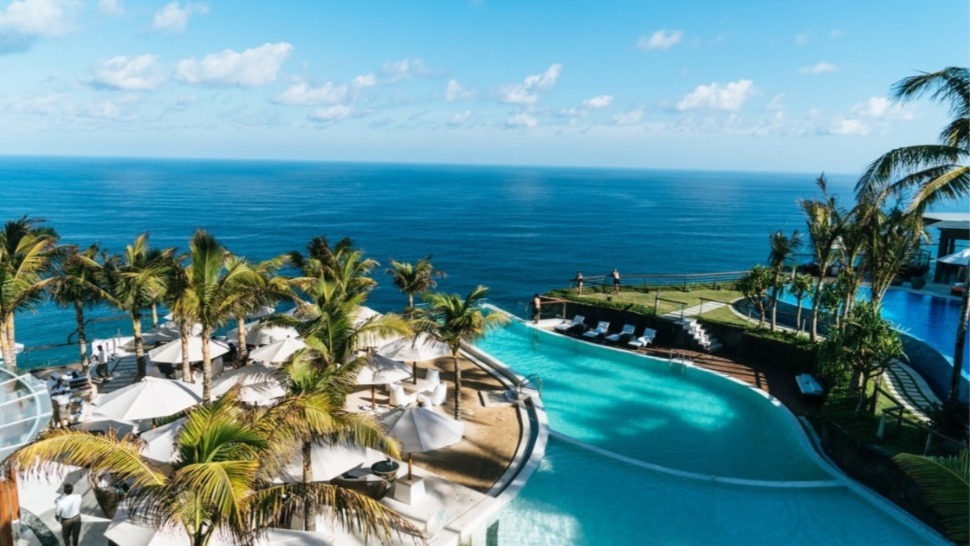 Here's How You Can Book Hotels Without A Credit Card 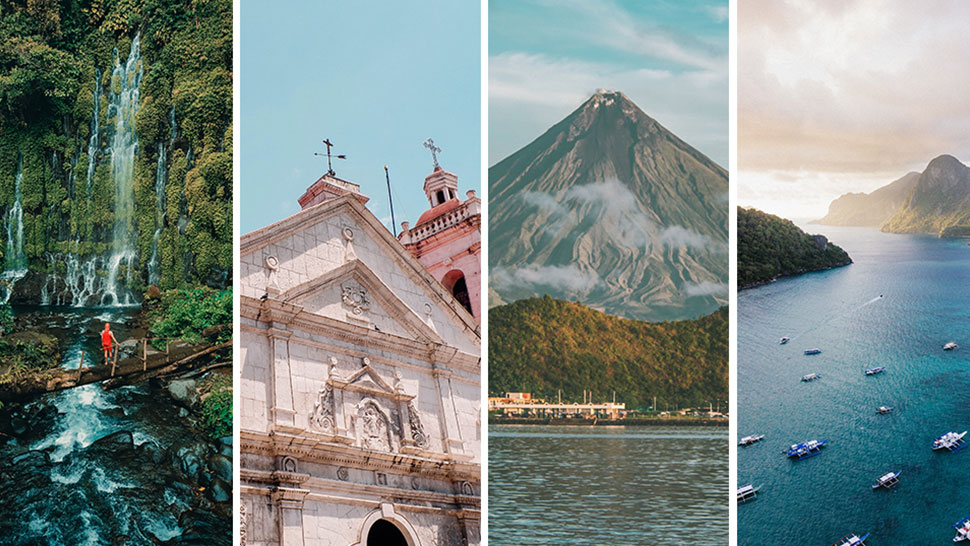