Clark's, the first ice cream shop in the Philippines, was the coolest place in turn-of-the-20th-century Manila.

When Clarke's, the first refreshment and ice cream shop in the Philippines, opened in 1908, it redefined how Filipinos enjoyed and comforted themselves in the year-round tropical heat.

The first thing that shocked the first Americans who came to occupy the Philippines was the sizzling, searing tropical climate that proved to be unbearable for many. An American child visiting turn-of-the-20th century Manila bawled out her discomfort: “It’s not the hotness that I mind so much, mamma, but the wetness of the hotness!” Another foreigner described the humidity as “heat that blisters and burns, that withers and consumes, that seems to dry the marrow while it boils the flesh.”

Filipinos, of course, had no trouble dealing with the long, sweltering summers they were born in. There were cool dips in river, in nearby bays and falls, of which many abound in Manila and its outskirts.

Before the advent of the “ice age” and refrigeration, natives took to drinking juices believed to have cooling effects on the body. Coconut water was a favorite drink; but since the nut and husk absorb heat, it was cooled first by immersing the coconut in water, as is true for other fruits. Caimito (star apple), pakwan (watermelon), and certain citrus fruit juices like dalandan, kamias, and the leaves of dayap (lime) have cooling properties as well.

But Americans were strangers to these fruits. They craved the cold comforts of their winter, and missed the heat-soothing, ice cold drinks and desserts that were so readily available back home.

The scream for ice cream, heard by Clarke

Fortune-seeking businessmen, especially foreign residents, sought to capitalize the need to make life more cool and comfortable by importing ice blocks from New England. These were first shipped to Southeast Asian countries like Hong Kong and the Philippines in the middle of the 19th century.

The arrival of ice in the country opened up a whole new world of opportunities for American entrepreneurs. They quickly became importers, distributors, and sellers of newfangled domestic appliances like wooden ice boxes, chests and coolers—precursors of the modern refrigerator.

MEET MET. Metcalfe “Met” A. Clarke was the founder and proprietor of Clarke’s, the first ice cream shop in the Philippines, which he started on a shoestring budget. To augment his income from the soda parlor, he sublet the second floor to American soldiers as living quarters. 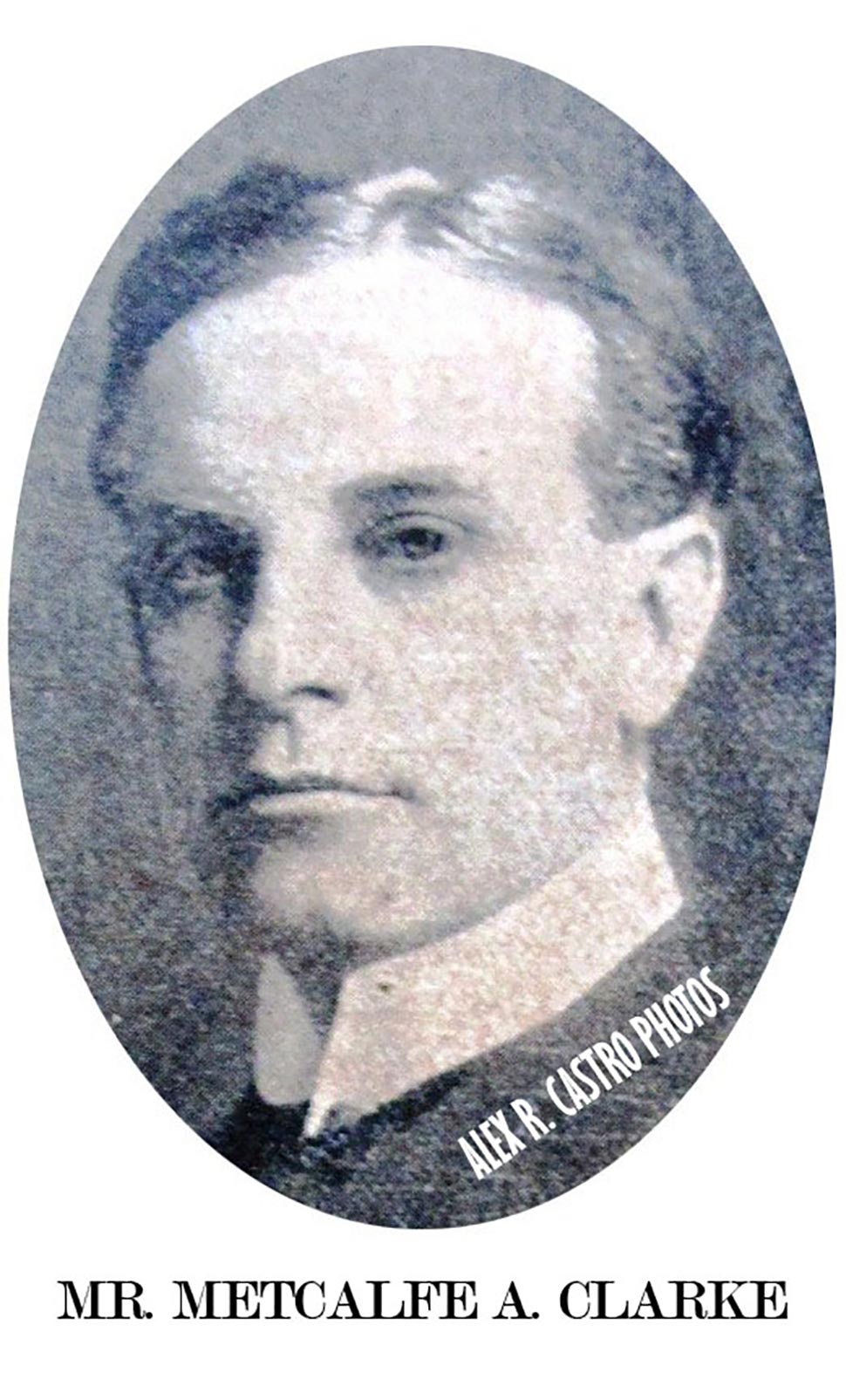 But another prospector did much better. When Chicago-born Metcalfe A. Clarke learned of the arrival of American soldiers unused to Manila’s suffocating, tropical weather, he leased a space in the west end of fashionable Escolta—Manila’s “Fifth Avenue”—in the public square of Plaza Moraga, at the foot of the Jones Bridge.

He turned this space into an oasis of refreshment which opened on December 1899: CLARKE’S, regarded as the first ice cream shop in the Philippines. 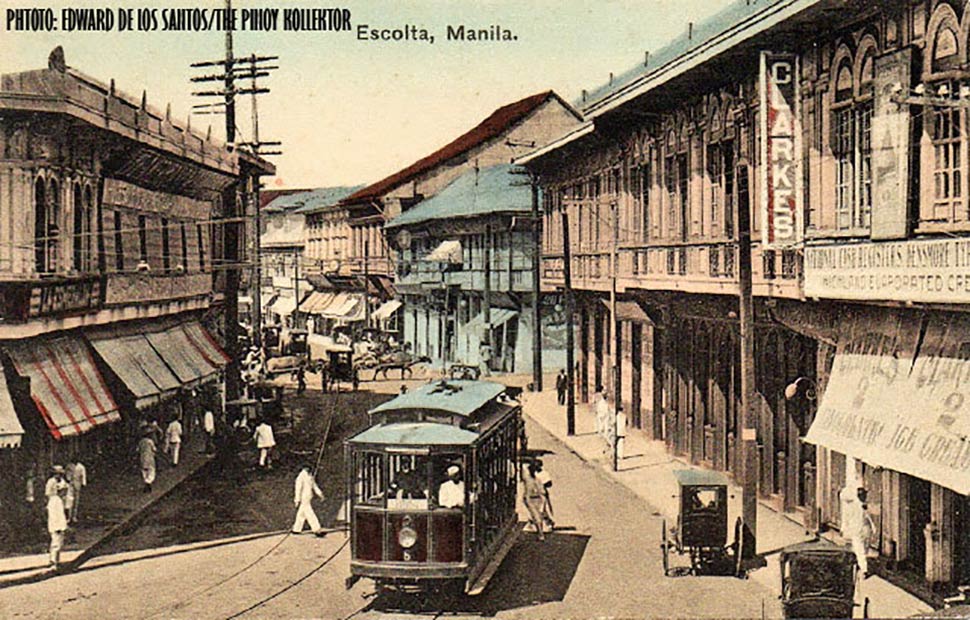 Summer lovin’, had me a blast

The first ice cream shop in the Philippines had charming, modern interiors that flaunted American soda parlor wire chairs (batibot) that came in adult and children’s sizes. Wood-bladed electric fans hummed from the high ceiling to fan customers as they snacked off dainty Dresden china while attended by white-uniformed Chinese and Filipino waiters.

CLARKE’S ice cream store was the delight of Manila residents as a new century unfolded. One summer, the soda parlor served pink ice cream made from evaporated milk in tin cans. The ice cream proved to be an irresistible hit. Patrons who tasted the frozen novelty swore it was the best-tasting flavor in the Far East. Classic flavors like vanilla, chocolate, strawberry were also available, providing instant relief by cooling the senses.

AS AMERICAN AS A SODA PARLOR. Patrons, mostly businessmen, tourists, and locals, chill out at Clarke’s. The first ice cream shop in the Philippines featured interiors duplicating the classic look of American soda parlors—right down to the batibot chairs, ceiling fans, and soda jerks in uniforms. 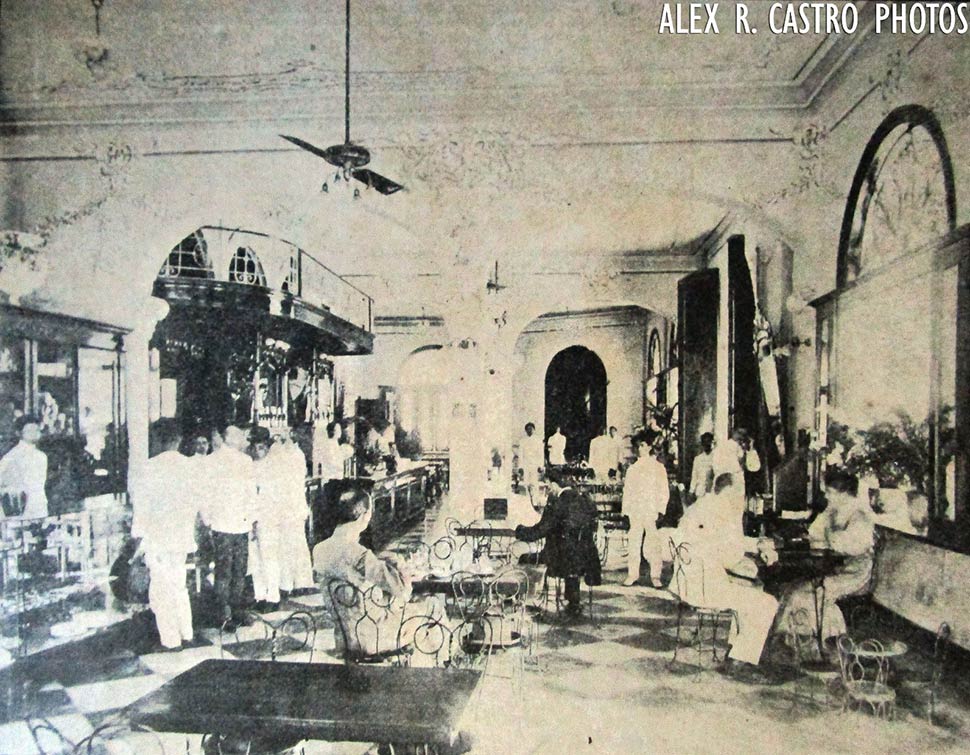 Ice cream and pastries and candies. Oh my!

The leading salon de refrescos of the Orient—as CLARKE’S was known—also served an assortment of breads and pastries, stick candies, lollipops, and chocolates. With money flowing in, Clarke put up a lucrative bakery and confectionary factory in the Sta. Cruz district on top of its already successful Philippine ice cream shop. The other stores heeded the clamor for genuine, wholesome, and clean breads and sweets.

For Americans in Manila, local breads would not do. “The bad kind of bread comes from the Chinos and the native pest houses,” a concerned writer once noted. “And I have noticed with disgust young American children sucking native sugared perils in the shape of cakes made the Lord only knows in what filthy fashion.”

BREAKING BREAD. The Clarke’s Bakery and Confectionary Factory, housed in a three-storey building on Calle Obando, Sta. Cruz. Operations were ran by American experts who supervised a coterie of Filipino bakers. 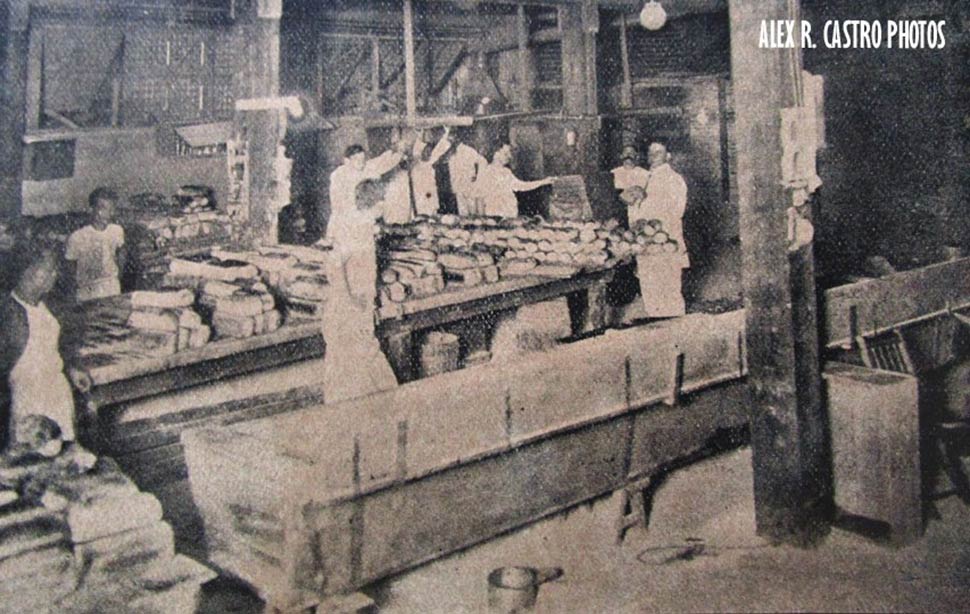 On the other hand, “good bread” could be had at CLARKE’S. Clarke took his company motto to heart: “Cleanliness is next to godliness.” He guaranteed, “You could eat your lunch off the floor of the bakery." The staff of Filipinos, supervised by Americans, were required to bathe and change even before going to work.

He also equipped his bakery with state-of-the-art baking machines such that no human hand touched the dough. The mixing, kneading, and shaping processes were all done by these mechanical marvels—and the result was bread of superior purity and wholesome quality. What was more amazing was that the machines could churn out 450 loaves of bread in seven minutes, enough to feed Filipinos many times over!

SWEETS FOR MY SWEET. On the third floor, Filipina workers wrap baked goodies and Clarke’s Superior Candies for distribution and sale at the Escolta shop, and also for provincial orders. 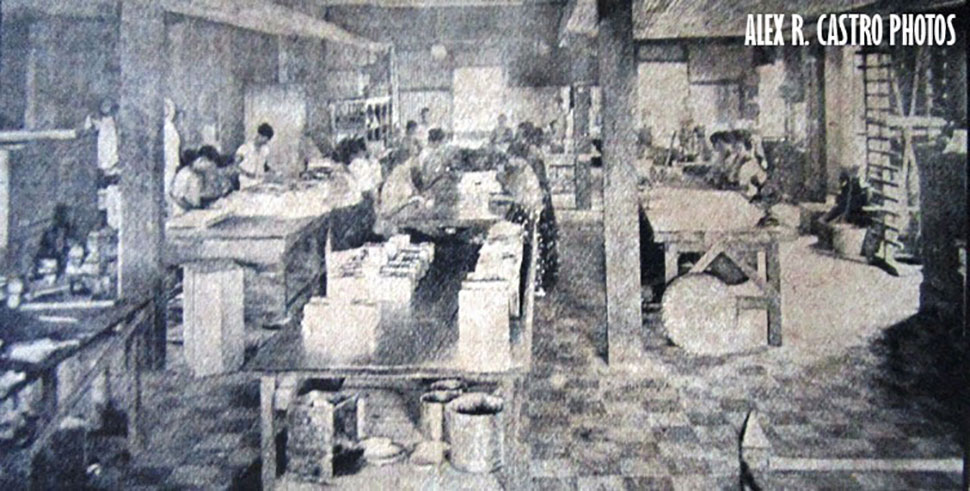 CLARKE’S baked confections—gingerbreads, cakes, Danish, rolls—were served with aromatic cups of his famous Café Mayon coffee brand. The beans, which he, himself, roasted and ground, were homegrown on his Indang, Cavite farm.

Hanging out with chill seekers

While it was true that people originally went to CLARKE’S, the ice cream shop, for its exceptional refreshments, many travelers and tourists hied off to No. 2 Escolta “to wallow in the atmosphere whose influence will fairly eradicate the blues.”

DAYDREAMS & ICE CREAMS. Clarke's, that time the Philippines' premier ice cream shop, was the one place in Manila where anybody meets everybody. 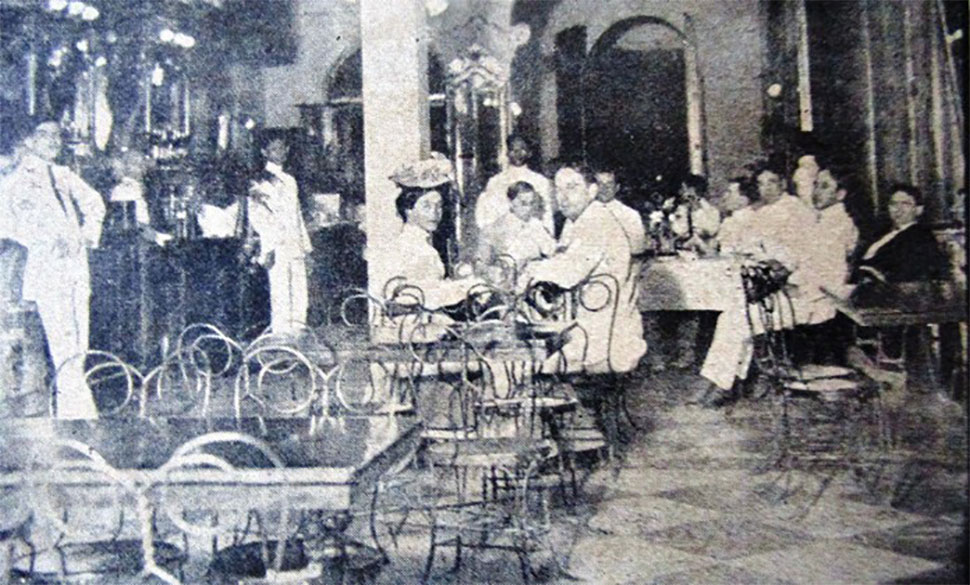 A habitué astutely observed: “Notice the happy greeting and smiling faces of the throngs who meet there daily. Do they not seem more intensely pleased with themselves and their fellow man in general, around and about this corner, than at any other place or time? You could not describe it…but you can feel it!”

Indeed, CLARKE’S, in its heyday was “the mecca of epicurean Manila-ites and epicures of many others.” It may have been a simple ice cream shop in the Philippines, but it was the place to see and to be seen. It was said that to be famous, one had to have his photograph taken in CLARKE’S.

Apart from its recognition as the Philippines' first ice cream shop, it was also in CLARKE’S that a cable was composed during a visit of U.S. Secretary of War William H. Taft’s party, announcing the engagement of presidential daughter Alice Roosevelt, the eldest child of President Theodore Roosevelt, and Nicholas Longworth, a Republican politician.

MATCH MADE IN CLARKE’S. The cable announcing the engagement of Alice Roosevelt with Nicholas Longworth, was composed in Clarke’s. The two were in Manila, part of an American diplomatic mission that traveled to Hawaii, Japan, China, Korea, and the Philippines. 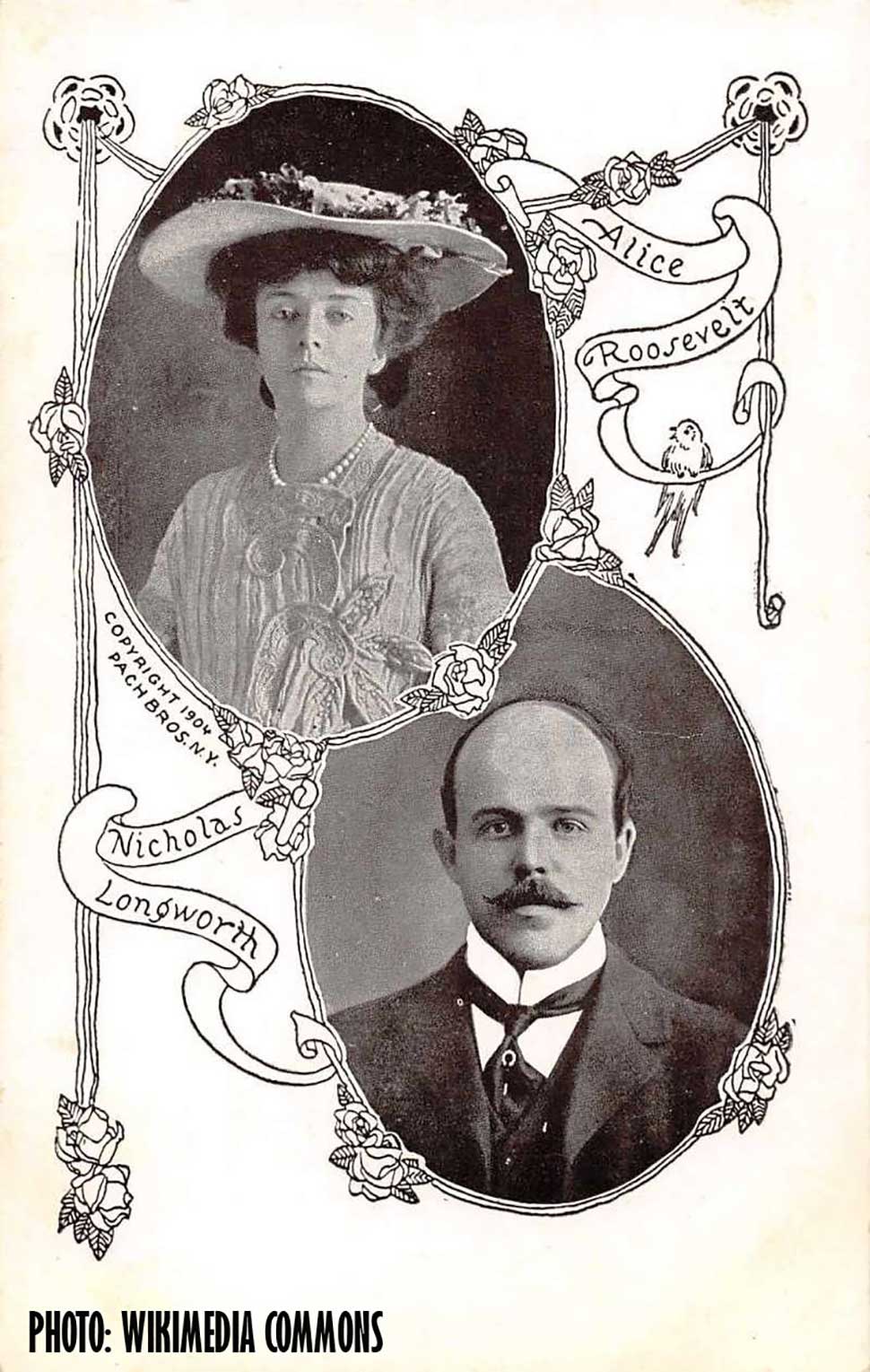 The reason, they say, for the energy of the place was no less than Mr. Clarke himself, who, from the very first was able to invest his employees with that genial “I-really-want-to-please-you” spirit that seemed to prevail in the very air.

His entrepreneurial skills, which developed after opening the Philippines first ice cream shop, were handsomely rewarded with windfalls of success. He became the first president of the Manila Merchants Association, an organization that unified leading American and Filipino businessmen of their day. Under his helm, the association produced promotional trade books and brochures, supported the great Manila Carnival and addressed labor concerns.

CLARKE AT THE CARNIVAL. The soda parlor shop was replicated in the float of Clarke’s that participated in the first Manila Carnival parade of 1908. 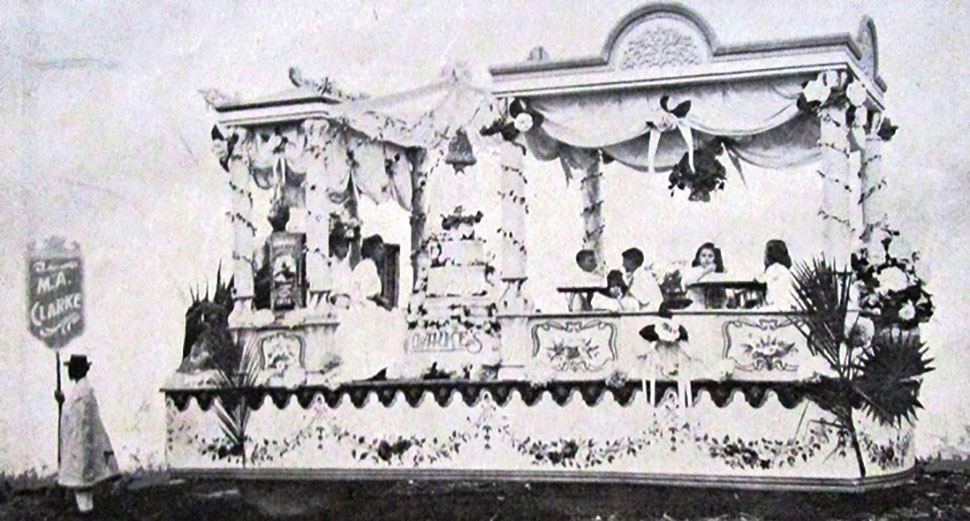 In 1903, Mr. Clarke and a few associates organized Benguet Consolidated Mining after acquiring some mining claims in Benguet, Mountain Province. He probably felt the need to diversify his business after the Insular Ice Plant was built in 1902 near the Puente Colgante bridge. It would just be a matter of time, he might have thought, that his pioneering food business, including his beloved ice cream shop, would find competition.

Clarke invested heavily in the mining company that began with a simple three-stamp amalgamation mill. He soon expanded it to include a cyanide and sand leaching plant that he personally financed. A typhoon however flooded the mines and destroyed the plant, even before he could recoup his investment.

YOU JUST GOT SERVED. Mr. Met Clarke hobnobbing with visitors and patrons in his famous Philippine ice cream shop.

With the entire capital wiped out, Clarke was forced to auction off his ice cream shop business in 1911. His Philippine ventures gone, Clarke called it quits and returned to the U.S. where he died sometime later in California.

Years after his passing, oldtimers would still reminisce about CLARKE’S, the first ice cream shop in the Philippines and a landmark symbol of American influence that came to define the new sophistication of the modernized capital city and its tastes for life’s finer things.

A COOL DINING PLACE. A 1909 Clarke’s trade ad for a souvenir program. 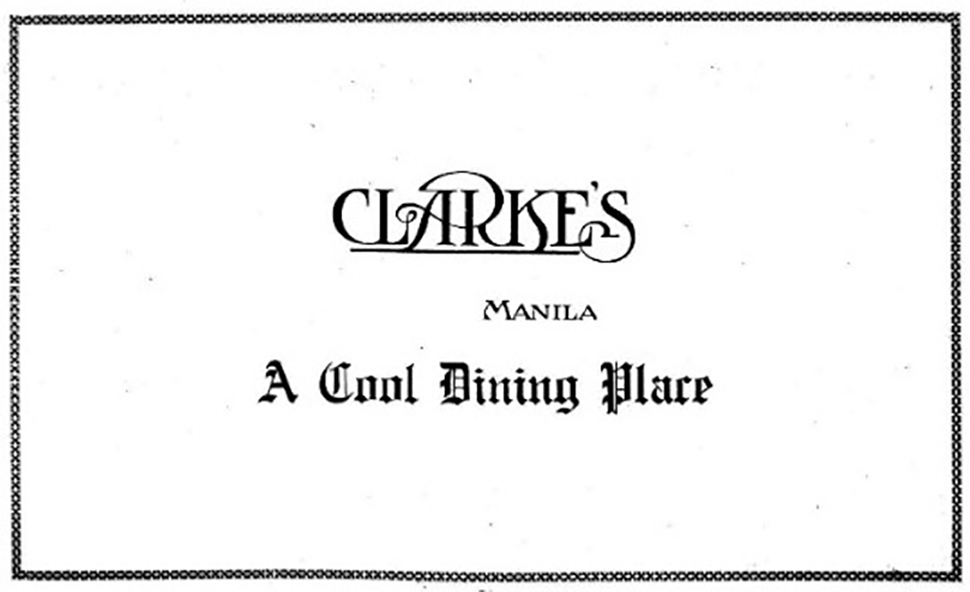 For a decade, Clarke's became a place of convergence for Manila’s social and business communities—to cool their heels, to discuss and settle issues, or simply to watch the world go by. Indeed, as its advertisements proclaimed, this premier ice cream shop in the Philippines was the best known corner in Manila. Because, if you are looking for a friend—you can find him at CLARKE’S! 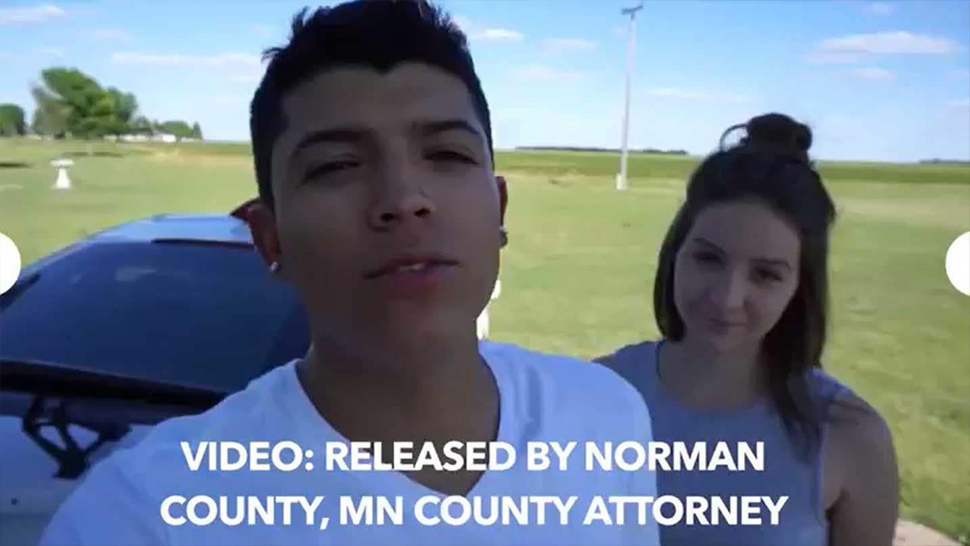