Douglas MacArthur is famous for liberating us from the Japanese, but he's also known to have had a passionate affair with Dimples Cooper.

The consequences for powerful men having dangerous liaisons outside of marriage are degrading, and most often, permanently damaging. Monica Lewinksy caused U.S. president’s Bill Clinton’s downfall. Arnold Schwarzenegger’s affair with her housekeeper, Patricia Baena, resulted in a son, Joseph Baena—and a marital rift with wife Maria Shriver. Closer to home, Ferdinand Marcos was ridiculed and laughed at, after tapes of his lovemaking with Dovie Beams leaked in public—this, even during Martial Law. (Read: Presidents Gone Wild)

AMERICAN CAESAR. GEN. DOUGLAS MACARTHUR. When asked the reason for his many successes in wars, he said, “I believe it was destiny”. He loved his military life, as well as women.

Which is why when the most decorated U.S. military man in history, Gen. Douglas MacArthur fell for the charms of Eurasian beauty, Isabel Rosario Cooper, he knew he had to keep the affair under wraps, lest his reputation gets stained and his ambitions sabotaged. In his lifetime he won many battles, but none as messy as the war he waged against the media, which had threatened to reveal his deepest, darkest secret.

MacArthur (b. 26 Jan. 1880/ d. 5 Apr. 1964) was raised in a military family: His father had been a Civil War general, while his mother encouraged him to be a soldier. After graduating valedictorian from a Texas military school, he went to the country’s premier military academy at West Point, where, in 1903, he graduated at the top of his class.

During the first World War, MacArthur saw action in France, where he rose to become a bemedalled brigadier general and, after a stint with his alma mater as superintendent of West Point from 1919 to 1922, he was assigned to the Philippines in 1924, where he was credited with stopping the mutiny of the Philippine Scouts. He was promoted to the rank of a major general in 1925—the Army’s youngest, at age 45.

In his prime, the strapping general noted for his vanity and brilliance, cut an imposing, attractive figure. As a cadet, he dated and was engaged to eight different young women. But it was to the socialite-heiress Louise Cromwell Brooks that he hitched his star on Valentine’s Day 1922, and in Manila, they began their life together. But Brooks and her well-heeled friends looked down on MacArthur’s Filipino company, which eventually led to her filing for a divorce in 1929. Macarthur agreed, “on any grounds that will not compromise my honor.

ISABEL OF THE ISLANDS. Isabel (or Elizabeth, as she sometimes refer to herself) Rosario Cooper was a Eurasian beauty who spent many years in local and international vaudevilles as a dancer and actress. Her stage name was “Dimples.”

Enter Isabel Rosario Cooper (b. 15 Jan. 1914/d. 29 Jun. 1960),  a young multi-racial actress, daughter of a Scottish businessman with a Chinese-Filipina mother, who reputedly hailed from the affluent south. As a child, she was nicknamed “Dimples,” which she later used as a stage name when she joined local “bod-a-bil” (vaudeville) shows, musical revues that featured dancing, singing, comic sketches, and assorted acts. She had also previously danced in a Shanghai chorus line.

Lured into movies, Dimples was cast in the 1926 film, Tatlong Hambog, where she, barely a teen, created history with Luis Tuason by performing the first mouth-to-mouth kiss in a Philippine film—a daring act at that time.

In 1930,  MacArthur was named as chief of staff of the United States Army. Five months before his reassignment to Washington D.C., his crossed paths with Isabel Cooper in a Manila social event. When she was introduced to the general, Cooper, in her exquisite chiffon tea gown, introduced herself as “an actress.” MacArthur was instantly smitten. A lobbyist who was at that party recalled her beauty: ”She looked as if she were carved from the most delicate opaline. She had her hair in braids down her back.”

The affair began almost at once. As soon as MacArthur got settled in his new job in Washington, he sent for her from the Philippines and installed her in a suite at Hotel Chastelton on 16th Street. The general lavished her with gifts like kimonos, lacy intimate wear, fur coats—but no outdoor clothes. MacArthur prohibited her from going out, so there was no need for those; her duty, she was told is, “to lay in bed.”

Gen. MacArthur’s job included traveling abroad and, to keep his mistress preoccupied, he bought her a companion poodle. While on extended official visits to romantic cities like Vienna and Paris, he sent her postcards and love letters, which Cooper kept and treasured.

But boredom made Cooper very touchy, and when she started bickering, MacArthur gave in and arranged to have a chauffeured car and spending money at her disposal. Isabel enjoyed her new-found freedom and it was said that, while MacArthur was away, she would paint the town red and go nightclubbing to seduce men. There were also stories of her splurging money on shopping sprees in Havana, Cuba.

Nobody knew of the general’s dalliances with Dimples until MacArthur made the mistake of earning the ire of Drew Pearson, an influential journalist of The Washington Post. Together with Robert S. Allen, he wrote a regular gossip column,”Washington Merry-Go-Round,” which enjoyed a wide national following.

The enmity between MacArthur and the Pearson-Allen tandem began in 1932 when 15,000 veterans known as “Bonus Marchers” staged a camp-out with their families in the nation’s capital. MacArthur dispersed the army protesters by force, which led to an article, jointly written by the journalists, that said how the methods used by the general was “unwarranted, harsh and brutal” and ended with a charge that he was “dictatorial and disloyal.” Feeling maligned, the angry MacArthur sued them for libel for $1.75 million dollars.

Around this time, too, MacArthur was getting fed up with Cooper’s extravagance and demanding ways. He also heard of her infidelities. The last straw was when Cooper enrolled in a law school where she was soon meeting young male companions. MacArthur broke off their relationship in 1934, and promptly dismissed her, sending her a letter enclosed with a plane ticket for her return trip to the Philippines.

Meanie Cooper agreed to rent out six very revealing love letters of MacArthur to newspaperman Drew Pearson, who planned to use these to reveal their secret affair. MacArthur paid for Pearson’s silence and got his letters back.

Meanwhile, in the course of his investigation of MacArthur, Pearson stumbled upon the name Isabel Cooper, located her—and uncovered their secret. When Cooper admitted that she was in dire financial straits, Pearson offered to “rent” six love letters that Macarthur sent to her for him to peruse. She agreed, and Pearson not only paid her, but also sheltered her in a Baltimore hideaway for her safety.

The cache of letters were very revealing as they chronicled the waxing and waning of their feeling for each other. In one, MacArthur pledged undying devotion to Cooper. A later missive included a “Help Wanted” ad clipped from a newspaper, a cold response to Cooper’s request to MacArthur to find her brother a job. The last letter from Sep. 11, 1934 contained MacArthur’s final rejection of her, complete with the aforementioned return ticket.

Cooper, however, made it clear that she had no plans of ever returning to the Philippines. The wily Pearson ensured that she won’t be going home anytime soon as he included her to his list of witnesses, as the hearing of the libel case proceeded.

MacArthur had already spent a staggering $16,000 on legal fees when suddenly, without any explanation, he dropped his suit against Pearson. A compromise agreement was apparently reached. On Christmas Eve, December 24, 1934, $15,000 in $100 bills was paid by MacArthur’s aide to Pearson’s agent, who acted in Cooper’s behalf. MacArthur, in turn, retrieved his six letters back (but only after Pearson made copies).

In 1937, Gen. MacArthur married Jean Marie Faircloth and they settled in Manila where their son, Arthur IV, was born.

Shortly after that brouhaha, MacArthur was relieved of his post as chief of staff and retired, but not before meeting a Southern belle named Jean Marie Faircloth on a Shanghai-bound ship. The two were inseparable by the time the ship docked and, for the next year and a half, the general squired the well-bred beauty, even as he accepted a new job as military advisor to the Commonwealth Government of the Philippines in 1937.

The general married his second wife in New York on April 30, 1937 and had a whirlwind honeymoon, as the general had to attend a military graduation of his newest Filipino cadets back in the Philippines. But Faircloth understood her husband, and learned to love the military life. They had a son, Arthur, born in 1938, as a new war, which would soon overtake the world, loomed in Europe.

With the advent of World War II, MacArthur would play an important role in the defense of the Philippines. Though he was compelled to leave the country and flee to Australia as the allied forces were being defeated in Bataan, he famously promised his return to Filipinos. After two years of struggle in the Pacific, MacArthur fulfilled his vow and liberated the Philippines from the Japanese in 1944.

Cha Bing, the artist formerly known as Isabel Cooper, as she appears in a Charlie Chan film in 1947.

Cooper, on the other hand, left Washington and relocated to the Midwest, where with her windfall, opened a beauty shop. She later moved to Los Angeles, and auditioned for Hollywood movies where she highlighted her exotic Oriental features using the name Chabing (or sometimes, Cha Bing).

She was cast but unbilled as one of the wives of King Mongkut in the 1946 film Anna and the King of Siam (together with fellow Filipina, Rosa del Rosario), and appeared as Lillie Mae Wong in the Charlie Chan film, The Chinese Ring (1947). In the 1950s, she was in The Art of Burlesque (1951) and I Was an American Spy (1951), a true story about war espionage set in Manila where she appeared as Lolita.

Isabel Cooper (encircled) was unbilled in this Hollywood classic Anna and the King of Siam (1946) as one of the wives of King Mongkut. Rosa del Rosario, another Filipina actress was also a cast member in this Rex Harrison-Irene Dunne starrer. 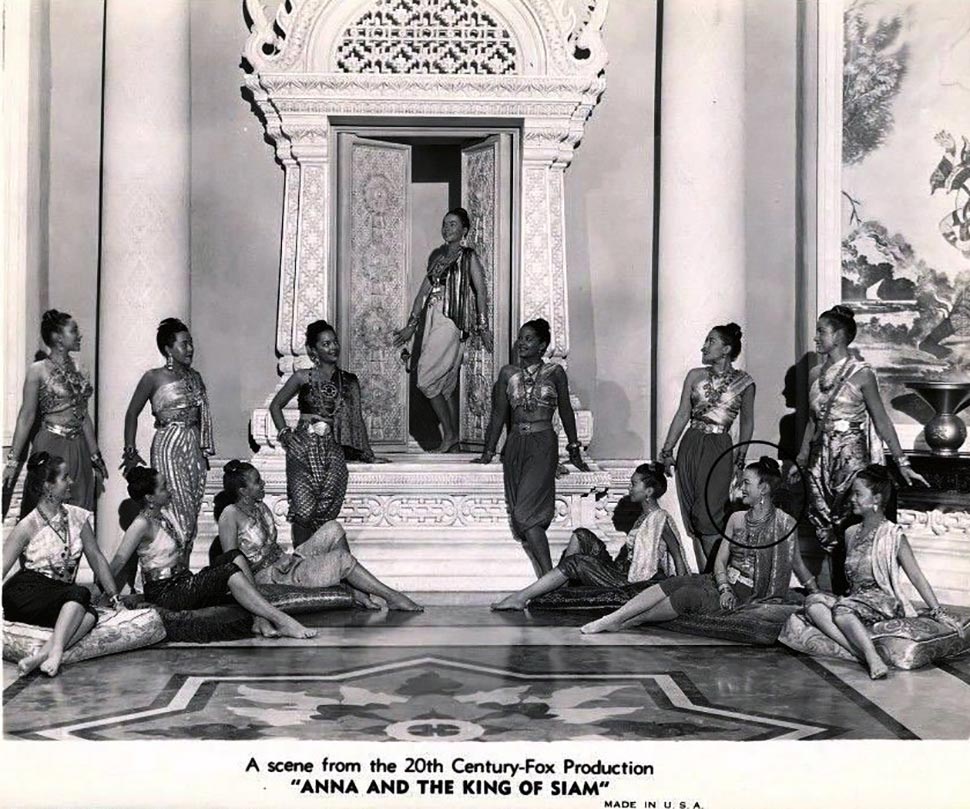 But offers soon dried up and Cooper fell into a deep depression over her misfortunes, including her failed relationship with MacArthur. She committed suicide by drug overdose on June 29, 1960.

View More Articles About:
history
More Videos You Can Watch

Who is Datu Puti? (And the Origins of Popular Brands' Names)
All Photos
Comments
View As List