Letters of Rizal to his family are always interesting pieces of history. 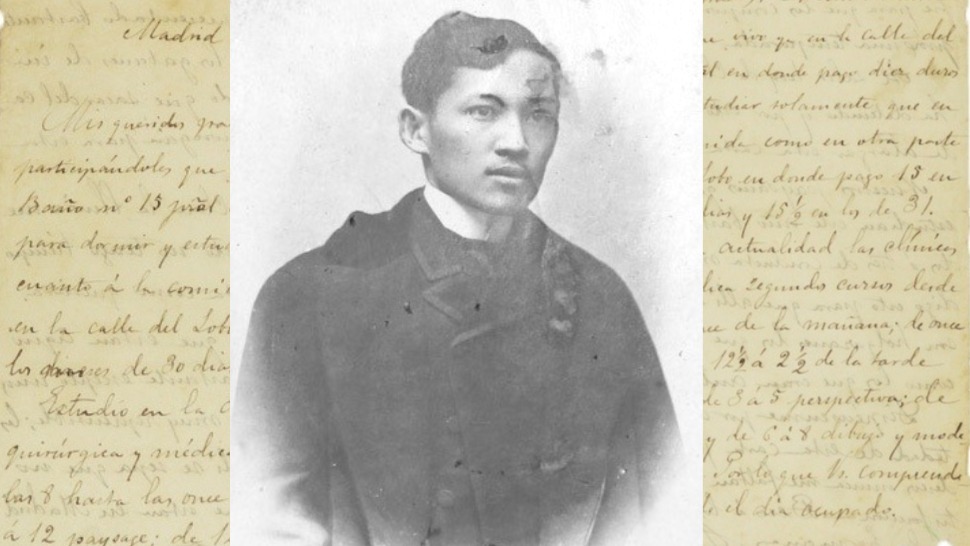 An exceedingly significant letter written by Jose Rizal to his parents has surfaced. Dated October 10, 1883, it is from the collection of historian Epifanio de los Santos, who acquired it from one of the members of the Rizal family. For the first time since that acquisition, the letter is back in the public arena, allowing historians to revisit the contexts in which Rizal lived his life in Europe.

The letter is written in Jose Rizal’s own hand on the front and the back of a single sheet of paper. It will go under the gavel on June 22, 2019 at Leon Gallery’s Spectacular Mid-Year Auction with a starting bid of one million pesos.

According to Lisa Guerrero Nakpil, Rizal’s letter to his parents reveal the context of time, place, and circumstance of events that would follow after 1883.

Front of Rizal's Letter to His Parents in 1883

The letter was written at a difficult time during Rizal’s life in which he was experiencing a period of adjustment. In 1882, he left the love of his life in the Philippines and abruptly sailed to Europe without saying goodbye to his lover and his family. It was also the year when he started medical school in Spain.

“The letter gives added dimension to the country’s foremost hero. Like any Filipino expatriate, Rizal would succumb to the enchantments of his foreign surroundings but also to its political liberalism,” said Nakpil.

Back of Rizal's Letter to His Parents in 1883

Rizal was very detailed in his letters, in which he told his parents in great detail the places he saw, and the food he ate.

“Rizal’s letter reveals he took his meals on the very next street, at Calle del Lobo (Street of the Wolf), which had a couple of restaurants frequented by Filipinos, including Hotel Ingles which still exists to this day,” said Nakpil.

“The letter situates him at No. 15 Calle del Baño (Street of the Bath) where Rizal slyly claims he is there only to sleep and study,” Nakpil said, referring to the letter of Rizal to his parents. In the letter to his parents, Rizal also detailed his notorious brindis or toasts.

“Jose Rizal would make the legendary brindis or toasts, but would include so many political barbs and insults to the Spanish colonial authorities that his brother would fear for his life and plead for him not to return to the Philippines,” said Nakpil.

“This would mark Rizal’s metamorphosis as an activist that would reach its zenith in his novels, the Noli and the Fili, and his eventual martyrdom.”

Letters of Rizal to Paciano Details the “Amusements” in Madrid

In the same year he wrote the letter to his parents, Rizal also wrote his brother Paciano about the “amusements” in Madrid.

The letter does not imply that Rizal partook in such amusements. However, it was Rizal’s friend and namesake, Jose Alejandrino, who outs Rizal’s gallivanting in his book, La Senda del Sacrificio (1945):

Letters of Rizal to Consuelo

Contrary to what Rizal’s letter to his parents state, Rizal did more than “sleep and study” during his stay in Madrid. Nakpil also tells the story of Consuelo, one of Rizal’s flings.

“The house at Calle del Baño was owned by one Don Pablo Ortiga y Rey, the former mayor of Manila,” said Nakpil. “Don Pablo had two daughters, the ‘prettier one’ being the 18-year-old Consuelo. She would keep a rather detailed, albeit indiscreet diary, on her gentleman admirers, which included Jose Rizal, then 23 years of age.”

In one of Consuelo’s diaries, she writes about Rizal:

“Rizal says he never goes out except to go to medical school and come here at night. Rizal too is in love, he hasn’t proposed outright but almost, almost… I am divided between Rizal and Lete, the former attracts me because of his conversation and because he seems such a serious young man… Rizal told me he was leaving for Paris to forget, to heal himself of a disease acquired a year ago…”

Based on Consuelo’s very revealing journal entry, it was possible that the “disease” Rizal told her about was a heartbreak or yearning for Leonor Rivera, whom many historians believe was Rizal’s most significant love and heartbreak.

Interestingly, in one of the letters of Rizal to Consuelo, he wrote a poem titled “A la Señorita C. O. y R:”

now when the heart awaits from love a sign,

or call the night when day begins to smile,

not knowing if another day will shine?

Apart from such poetry, Rizal also gave Consuelo a variety of gifts, according to Nakpil. Among them were gift of fabric and slippers from Manila, the first bloom from his houseplant, and music sheets from Paris.

Stabs in the Dark: How Avelina Teodoro Became a Murderer at 16
All Photos
Comments
View As List