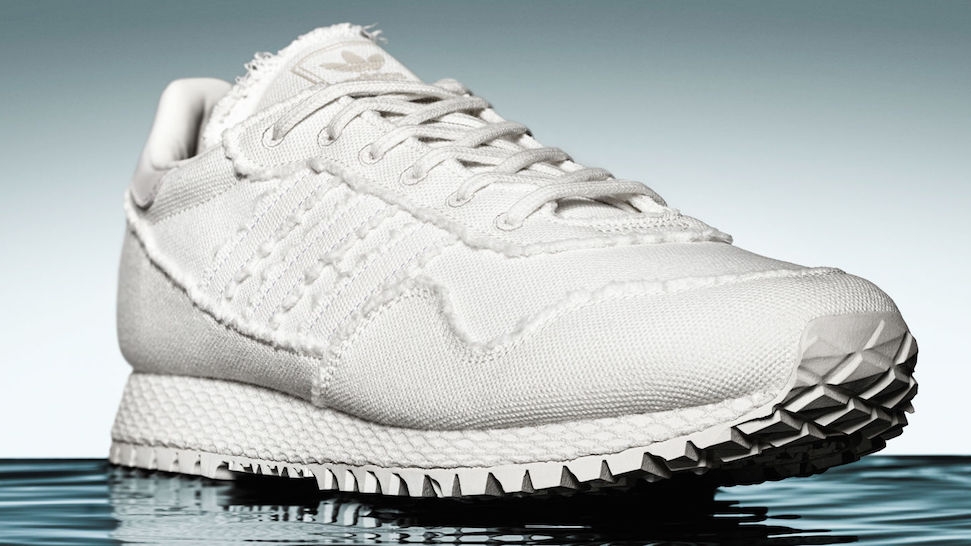 In the not-too-distant future, the shoes you're wearing will be eaten up by time: the leathers digested by bacteria, the canvas rotted to nothing, the EVA crumbled into dust.

In the recent past the shoes you're wearing were unimagined: the leather was the skin on an animal growing or unborn, the canvas locked in a cotton seed, the EVA unformed, buried in oil deposits deep underground.

A thousand years from now the entire lifecycle of you and your shoes will be barely a blip on the long line of history, and what protects you today from the jagged terrain of the world will mean nothing and be entirely forgotten. 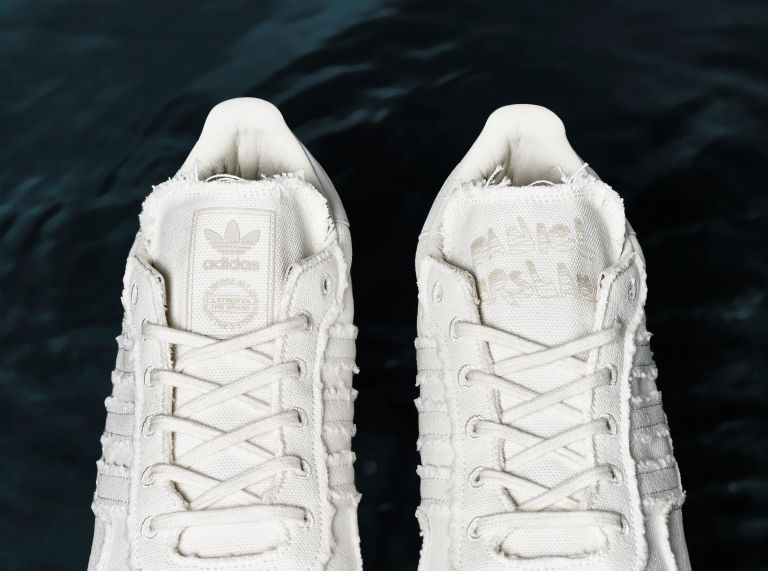 When Daniel Arsham teamed up with Adidas Originals for a creative collaboration, there were a ton of reasons for him to do so (the brand's inspiring work with Y-3, its readiness to deeply collaborate with a wide range of artists, its respect for materials), but he immediately reached into his own personal past for a starting point. The genesis of the project, and specifically the sneaker that releases next week, is told as a blend of fiction and fact in a new film by Arsham posted this week.

The first part of a film series, "Hourglass - Past" frames memories of a young Arsham customizing and wearing a pair of Adidas Originals New Yorks ahead of the landfall of Hurricane Andrew in 1992. A contemporary Arsham remembers the past, experiencing it as lived in the moment, while also coming in contact with the future. All three stations in time exist at once, their traditional order shattered by trauma, and in every station Arsham is wearing New Yorks. They're not the same pair in every moment, instead they shift over time. But the model, the silhouette, the shape—the same, even if the component pieces are not.

If you ever visit the Natural History Museum, remember that your favorite dinosaur isn't the bones archeologists dug up. Instead the articulated shapes we see, the fossils, are made from rock sediment that replaced dissolving bone matter over thousands and millions of years. They're copies—imperfect copies. They're not relics from a time gone by but facsimiles of something lost forever. They're the shadow of history, not a piece of it.

Arsham may best be known for his "Future Relic" series, which takes icons from contemporary life, like cameras and basketballs, and turns them into veritable fossils, reminding us that the present is the past. The sneakers that Arsham and Adidas Originals unveiled today have imprinted on them the text "THE PAST IS PRESENT," visible only under a black light. 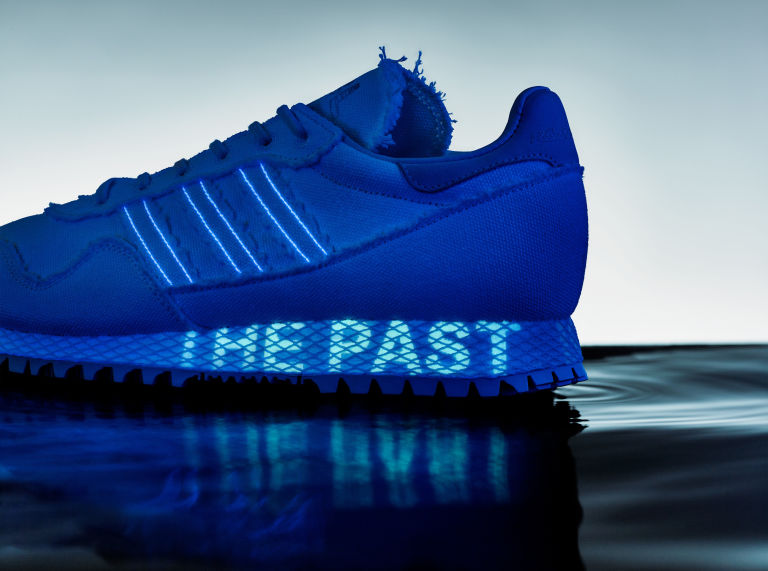 These two ideas, that the past is present and the present is past, seem to be in direct opposition to each other. But they're not. In our construct of time, where time flows from the past to the present to the future, they might be. But Arsham proposes we challenge that notion, to allow them to all exist at once, or visit each in turn so that the order becomes arbitrary.

"I think the phrases are interchangeable and I think more than anything, both in my work and in this project, I'm trying to create a sense of fluidity in time where you're not quite sure when something might exist or when it's from," he explains. "There's a kind of uncanny sense when you're looking at something from your own life with the perspective of time which is a sort of jarring sensation. In my work I've always tried to create a sense where I can let things float in time. They could be now, they could be in the past, they could be in the future." 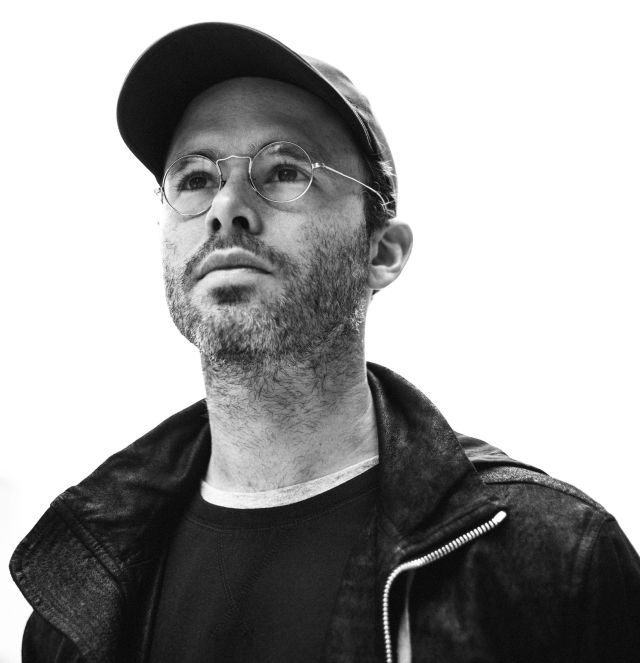 So much of the human condition is viscerally buying into the notion of progress and growth as an inevitable byproduct of the mere passing of time. But having a less linear relationship with time forces us to recognize ourselves as having essential, invariable identities, with qualities and flaws that are unchangeable, even if we ache to grow from them. A "New Year, New You" cannot exist because you will always be the same you. The purchased products we surround ourselves with to (theoretically) add value to our lives are what will decay and rot away, while what we think of being the most changeable, thanks to a bottomless well of potential—our essential selves—will remain almost entirely intact for as long as we live. If we allow a simple linear notion of time to fall away, maybe we can engage with the world in a truer way.

Plus it gives us the freedom to just maybe buy a pair of shoes if we want them. Because who cares, right?

"I've never tried to be entirely prescriptive about what the work means," Arsham says. "I always find it an invitation to reimagine your everyday life and I think because so many of the pieces are so iconic—the original objects, the cameras, and the basketballs—they speak to a wide variety of people and also jump across culture. These works function the way in Asia as they do in Europe and the U.S. So it's like an invitation." 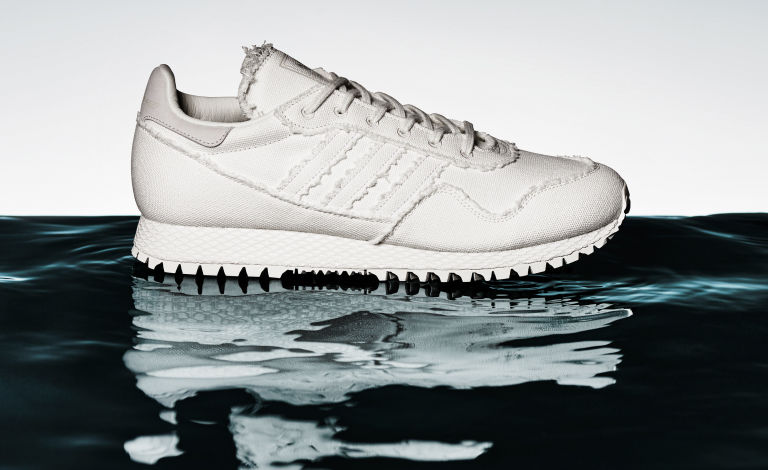 Many of Arsham's fine art pieces, like the "Future Relic" series, come in boxes that are sealed and once the seal is broken it cannot be reformed. The work is either locked away, or removed from the tomb forever. The sneakers are packaged the same way. Until the buyer opens the box the shoes will exist as a kind of Schrodinger's Sneakers, existing in pristine, priceless, deadstock perfection and absolute unwearble uselessness at the same time. Arsham anticipates many pairs will remain in that state of stasis, unopened. "I think that because of the care, and because of peoples' expectations of what I've done with some of my other work, there's going to be a lot of people that never open the box," he says. He won't go so far as to say this choice can act as a metaphor for whoever buys the shoes and takes them home. He won't say that how one chooses to treat the box can be a marker of how one might live their life. But he will say, "Like everything else: Open the box or not."

In reality, it doesn't have to be one way or the other. Arsham prefers to play both sides. "I often get two," he says.

The Daniel Arsham x Adidas Originals take on the New York will be available in highly limited numbers on July 22nd, and retail for $180. 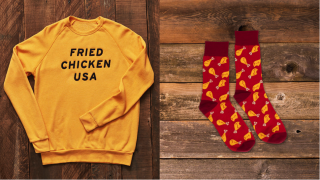 Wait, Is It Possible That KFC's Merch Line Does Not Suck? 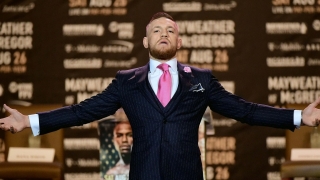 Who Put Together Conor McGregor's Brilliant 'F*ck You' Suit?
All Photos
Comments
View As List