What's it like to be Nick Bateman, multi-hyphenate influencer (with 6.6 million Instagram followers) and Bulgari Man Wood Essence ambassador? 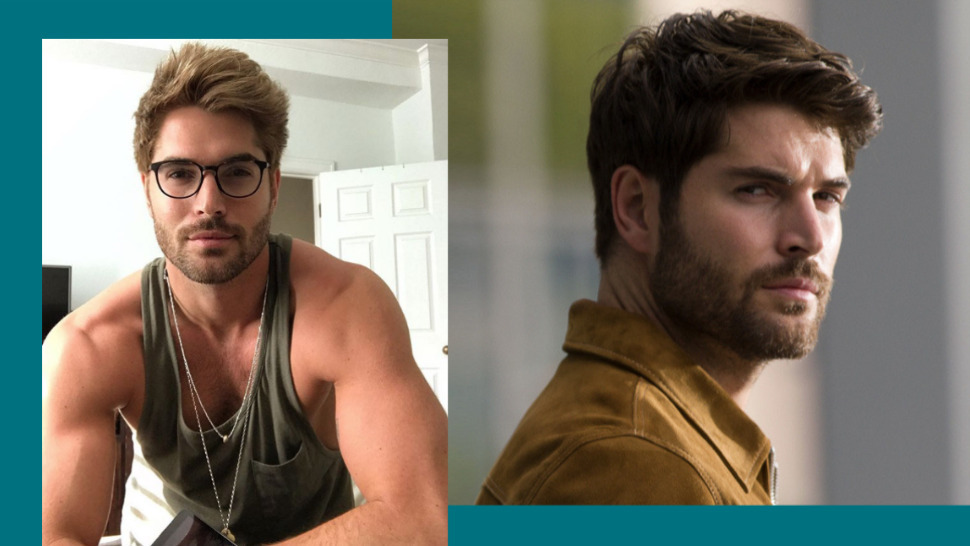 When Italian luxury house Bulgari chose model, actor, and Instagram superstar Nick Bateman as the ambassador of its latest fragrance, they weren't only considering his 6.6 million followers (though millions of eyeballs are certainly a plus), but also his connection to Bulgari Man Wood Essence.

The 31-year-old, who has a passion for Goju-ryu karate and mountain idylls, is the perfect reflection of the city-meets-nature fragrance. In fact, Nick served as inspiration for the perfume, which can be described as a fusion of bold woods spiked with citrus and spice.

“I was intrigued to find out that, when they were coming up with the fragrance, they sent the master perfumer my photos and told him who I am, what I represent, and my connection with nature,” he shares. “I'm still in awe about that.”

As well, there is that face. Nick, who got his big break with an Abercombie & Fitch campaign, follows a surprisingly fuss-free grooming routine that centers on... happiness. “Above everything, try to live a stress-free life. Stress is going to make you age faster more than anything,” he says.

At the London launch of the new Bulgari fragrance, Esquire talks with Nick about DIY haircuts, where best to put on perfume, and secret nature hideaways. 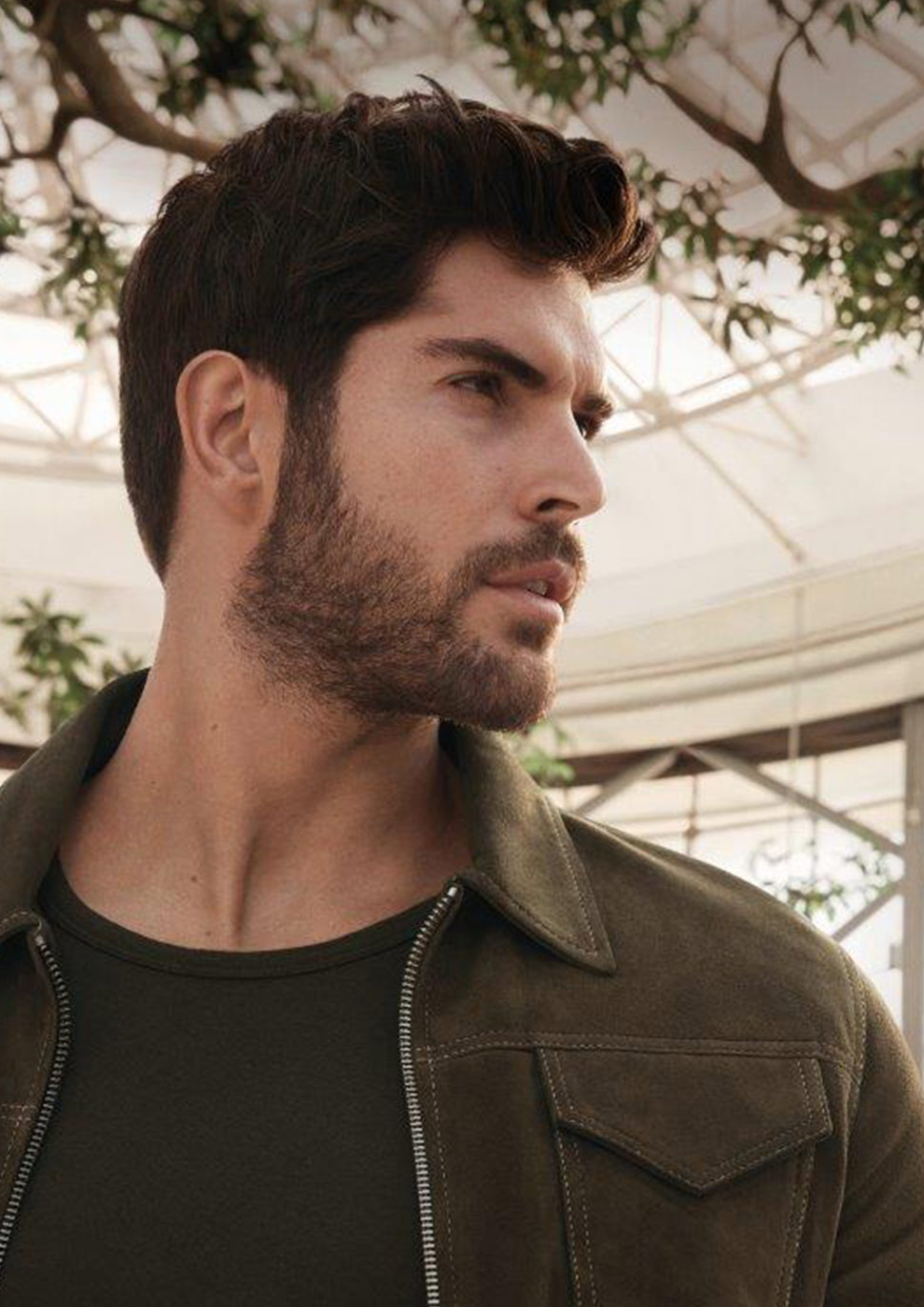 His maintenance routine is easy and DIY

That mop of nonchalant locks is the product of his own hand. “My hair grows so fast that I literally have to get a cut every two weeks,” Nick says.

Six years ago, when his hairdresser could not accomodate a last-minute appointment, he decided to try his luck with the scissors. The first year was tough. His friends would ask, “What did you do to you hair?” and he'd reply, “Shut up! I'm getting there.” Now, he has everything under control. “So every week, I'll trim my hair, my beard, and sometimes my body hair to keep it nice and groomed.”

He doesn't wash his hair

“Sounds gross, but you shouldn’t shampoo your hair. It strips your hair of its natural oils,” Nick advises. “I'll rinse my hair probably once a week to get any dirt out of it, but I'll only wash it once a month.” But if you have greasy hair or are coming from a sweaty workout, wash it.

He says you shouldn't go on a diet—really

“Just go on something that you can maintain in your life,” he says. In other words, always eat healthy. What he doesn't like is when people eat good for a few weeks, lose the weight, and then go back to whatever they were doing before that. “It's just stupid. You're wasting your time,” he remarks.

His best advice for abs is... food

“A lot of people ask me how you get abs: 80 percent of it is diet. Maybe 90. Everyone has abs. There are just layers covering them,” he points out. “I'm 31 years old now. When I was 20, I could eat whatever I wanted and nothing [would happen]. Now, I have to work harder.” 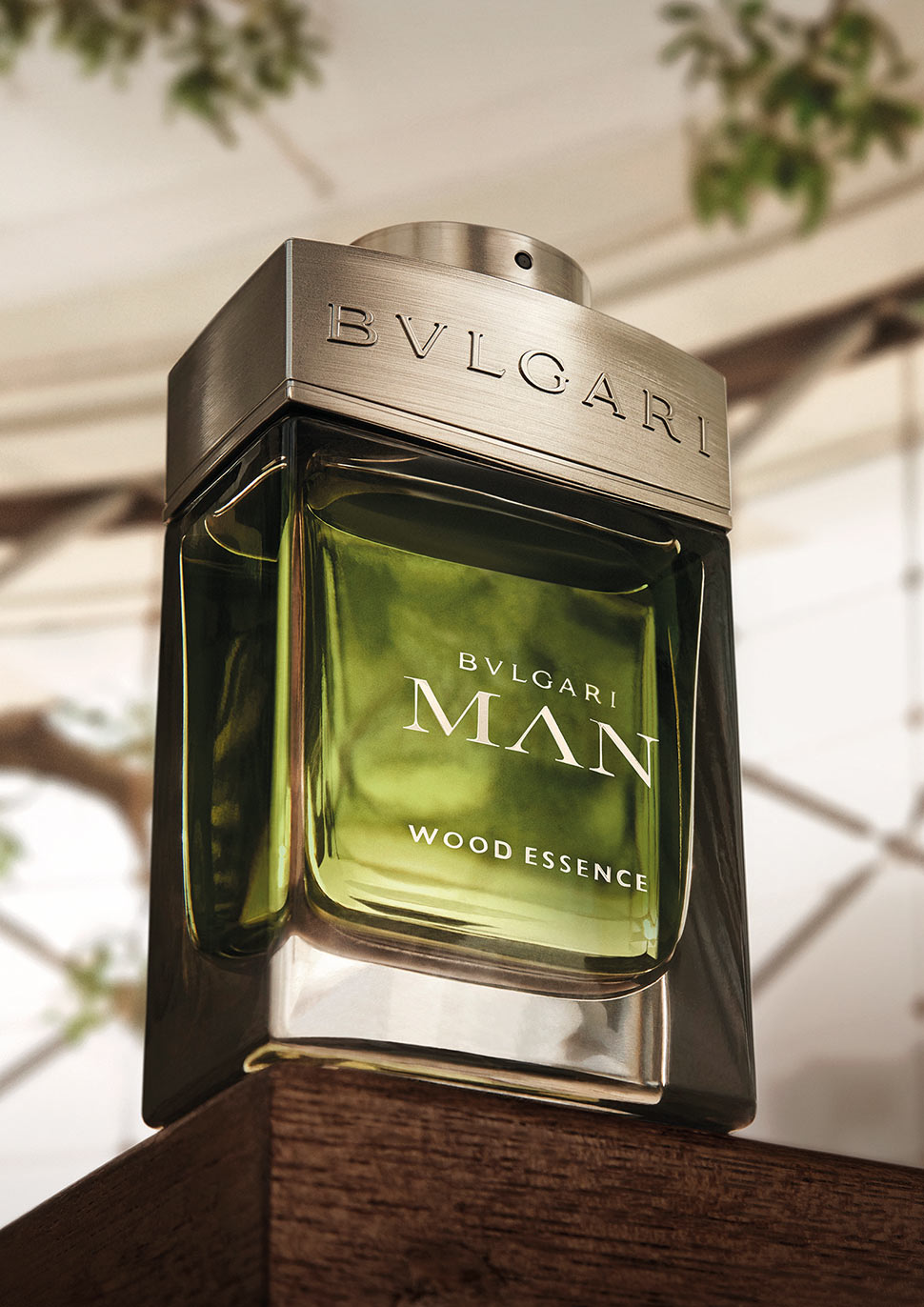 For the man who lives in both worlds, Bulgari Man Wood Essence is a blend of bold woods spiked with citrus and spices. IMAGE: Bulgari

He knows that perfume should be part of the plan

Smelling good should be top of mind because it forms part of the first impression. Nick imagines this: You walk up to someone who's beautiful and you think: “Cool, they look great.” Then, you shake their hands and smell something unpleasant, so you change your mind: “Uh. You're cool, but no.”

But when you smell good, you look even better. “A man can look completely different with proper grooming. I couldn’t stress this enough,” he says.

He likes how scents take you back to a memory

After years of attending karate competitions at various hotels with pools, a young Nick started to enjoy the smell of chlorine, which, by then, would not anymore remind him of water.

“Everytime I'd walk in and smell chlorine, it's game time! We're at a karate tournament and it's time to kick some ass!” he remembers.“That's the great thing about smells and fragrances. They always take you back to somewhere and even make you happy.”

He has a specific way of wearing perfume

Nick sprays perfume near his ears and at the back of his head. When you meet a friend, the first thing you do is hug. Sometimes, they also lean in and whisper in your ear. When that happens, the "nose instantly goes to the back of your neck.” Take note.

“I have a beard balm that I use and it's very essential oil smelling. And people are like, 'Oh, he’s not wearing anything. That must be his natural smell,'” he says. “To me, the coolest thing is to trick people into thinking that it's your natural smell, and I think the good thing about [Bulgari Man Wood Essence] is that it can almost be your natural smell.” 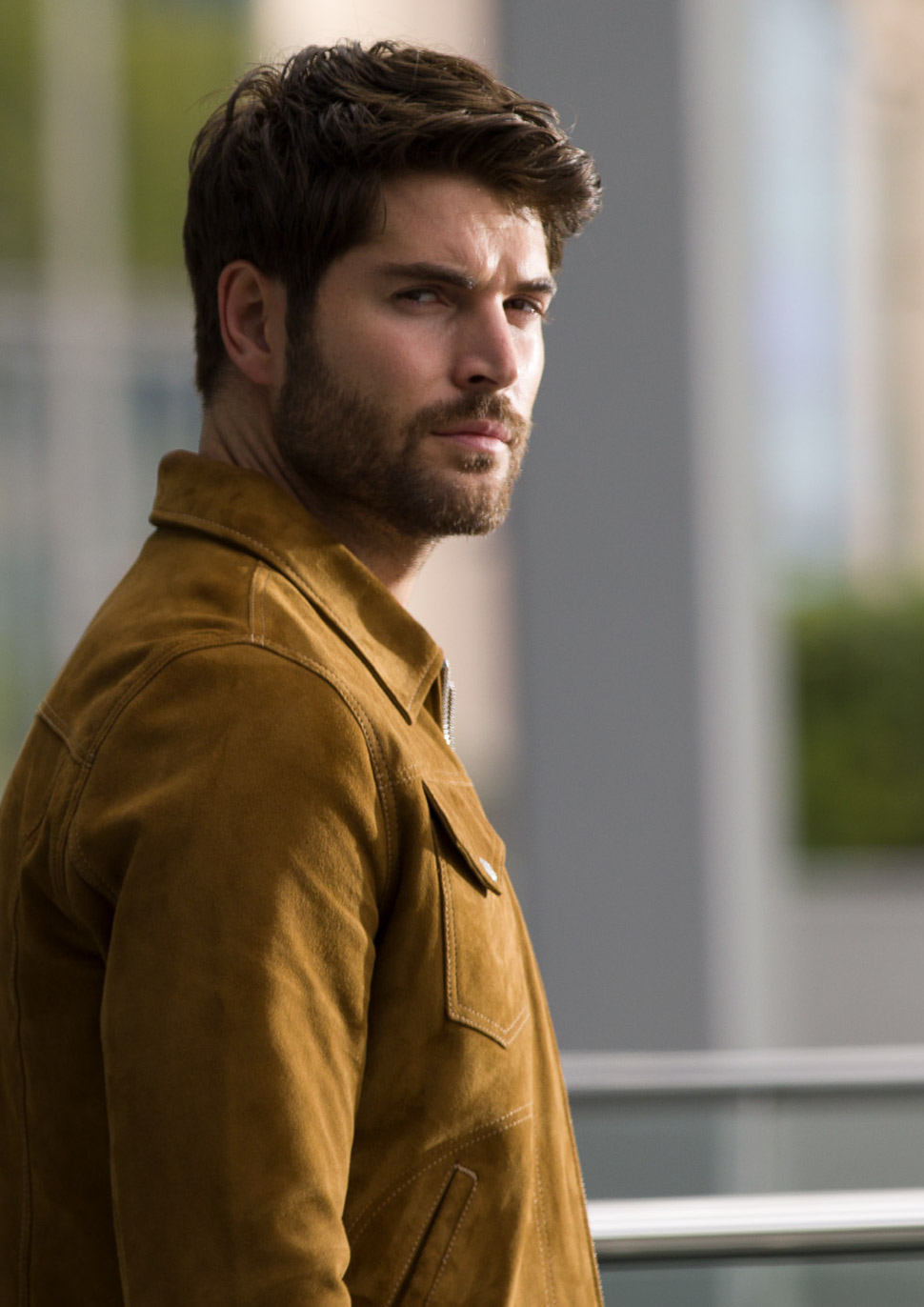 ADVERTISEMENT - CONTINUE READING BELOW
'The fragrance really embodies someone who can love the city and nature equally, and I'm exactly like that.' IMAGE: Bulgari

He has a lot in common with Bulgari's new fragrance

Nick describes the perfume as a balance of the fresh scent of nature with the crisp flavor of the city. “That's what I like to represent in my life. I do like going to the city. I do like going to the craziness of different places. I was in Las Vegas a couple of weeks ago and I had an amazing time!” he shares. “But after two days, I wanted to get the hell out of there so bad and get back to my sanctuary, where I live, and nature.”

Nick lived in Hollywood for two and half years, but since he loves nature, he decided to move to Santa Clarita last January.

“It's literally surrounded by mountains. So beautiful. It reminds me of the movie ET,” he shares. “I ended up buying a quarter acre of land with a house, pool, hot tub, and all this land that my dogs can run around in. Behind my yard, there are mountains covered in trees. It's my little sanctuary that's only 30 minutes away from Hollywood. People are always shocked when they see my house.”

When collaborating with companies, the social media star only chooses projects that are “organic to who I am and what I do.” He continues, “If I feel I have real organic energy with the company, that's what's going to make it successful (Bulgari, he says, was a perfect fit).”

Nick also keeps busy with acting (his latest movie was The Matchmaker's Playbook) and his new clothing company. “I just started a clothing company, DTLA Brand, so right now that's where a lot of my time is going. We just got picked up by Saks Fifth Avenue,” he says. 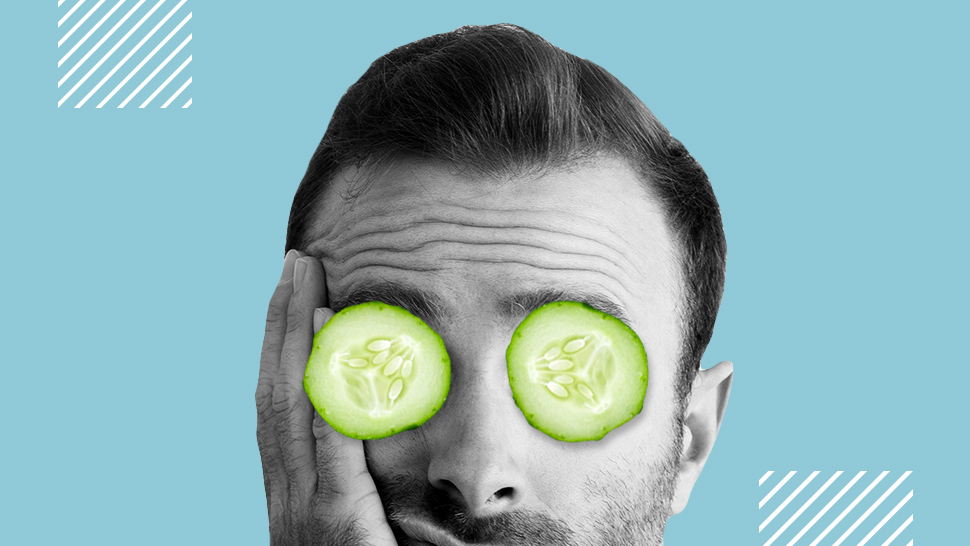 Ask Esquire: How Do I Fix My Tired Face? 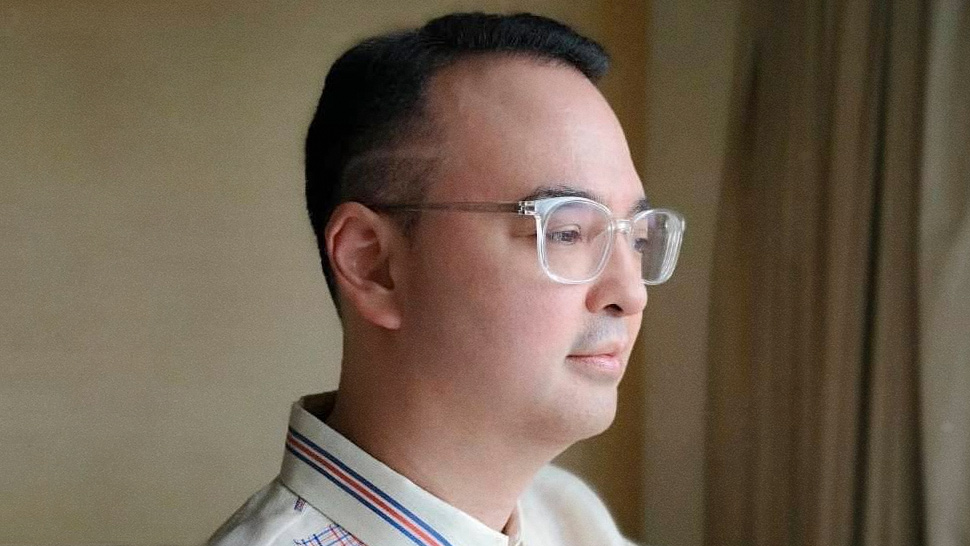