These Documents Reveal the Intense Rivalry Between Aguinaldo and Bonifacio

One of the documents led Bonifacio to his early demise.

Emilio Aguinaldo and Andres Bonifacio’s rivalry was the Philippines’ most notorious and intriguing, it peppered with secrets and deception that we have only recently begun to understand. Thanks to extremely historically important documents that have resurfaced after more than 100 years of being kept in private collections, we are able to revisit their significance and shed more light to the very tense relationship between Aguinaldo and Bonifacio.

On March 22, 1897, the Magdiwang and Magdalo chapters of the Katipunan, which also happened to be the two largest and most powerful Katipunan branches in the country, were set to convene in Cavite in what will be known as the infamous Tejeros Convention. The purpose of the Convention was to discuss the Katipunan’s of and to set up a revolutionary government, in part to quell the rivalry between the Magdiwang and Magdalo groups. Bonifacio, as the leader of the Katipunan, presided over the convention. Although Bonifacio did not take sides in any faction, it was thought that Magdiwang was more supportive of Bonifacio than Magdalo, whose leaders were composed of disgruntled members of the rich , including Aguinaldo.

Previously, these documents were kept as separate pages, but for the first time in over 100 years, they are reunited in their entirety, allowing historians to discover important events in Philippine history.

However, a certain Daniel Tirona would not have Bonifacio sit as Interior Secretary, saying the latter did not have enough credentials to be in government. Tirona suggested that a lawyer nominated instead.

The insult set off Bonifacio, who declared the meeting invalid and then walked out with his men.

Mariano Alvarez, in a letter to his uncle, also described the meeting as fraudulent and deceitful, with some Cavite men already manipulating the voters beforehand. He reveals the myopic and view of Filipinos, who saw Bonifacio as an outsider:

“Before the election began, I discovered the underhand work of some of the Imus crowd who had quietly spread the statement that it was not advisable that they governed by men from other pueblos, and that they should for this reason strive to elect Captain Emilio as President.”

Meanwhile, Bonifacio made his way to Naic, Cavite, where he would write the Acta de Tejeros, signed by himself and 44 important officers of the Katipunan. For the first time in over 100 years, the entirety of the document is made available through the Leon Gallery.

The Acta de Tejeros is a document proclaiming the Tejeros Convention as invalid because of its lack of due process, and also because of the underhanded chicanery that marred its elections.

Written and signed one day after the events at the Tejeros Convention, the Acta de Tejeros is seen as Bonifacio’s outraged yet calculated move against Aguinaldo’s capturing of the Katipunan.

The signatories further rejected the republic instituted at the convention and reaffirmed their commitment to the Katipunan. Unbeknownst to them, it was this very declaration that would cost Bonifacio his life, charging him with treason in a kangaroo court composed of Aguinaldo’s loyalists.

A month after the Acta de Tejeros was signed, Bonifacio once again took things a step further by issuing the Acta de Naik. The document proclaims that some leaders of the Katipunan (implying Aguinaldo) had betrayed the Revolution and had committed treason.

According to historian Jim Richardson, “the charge of treason sprang in part from Aguinaldo’s reaction some weeks earlier to letters he received from two Spaniards urging a negotiated peace.” For Bonifacio, the revolution was non-negotiable and saw Aguinaldo as willing to abandon it provided the Spanish agreed to some concessions. 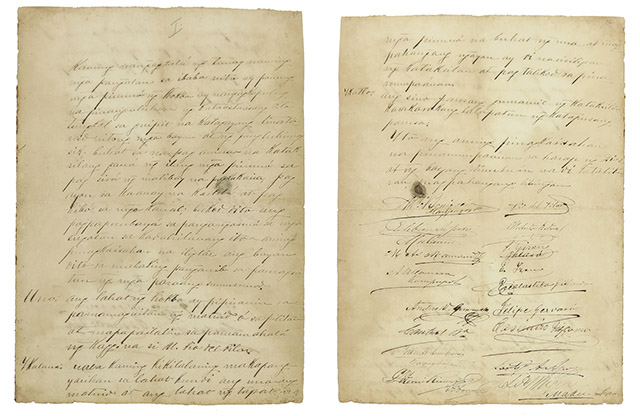 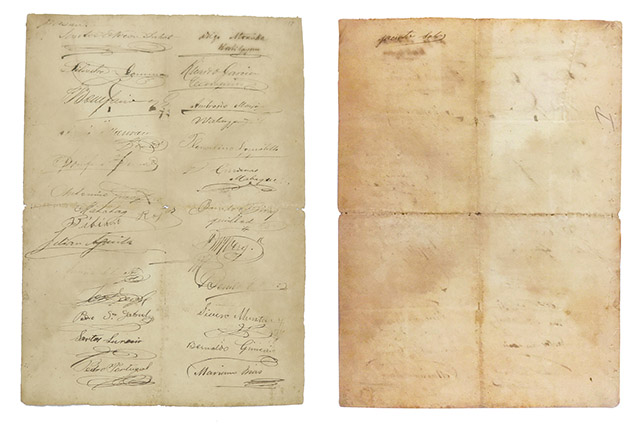 The document is signed by 41 men, which surprisingly included two of Aguinaldo’s most senior generals: Pio del Pilar and Mariano Noriel. This defection scored Bonifacio important points in retaining his control over the Katipunan.

Another very significant signatory which has only recently been revealed is Mariano Trias, who for the past 100 years was thought to not have signed the document because he was elected Vice President at the Tejeros Convention and had sworn his oath of office with Aguinaldo.

Other important signatories in the Acta de Naik include staunch Aguinaldo men like Artemio Ricarte, Antonio Guevara, and Severino de las Alas. This proves that it was not only Aguinaldo who was capable of executing shrewd political stratagems. Apparently, Bonifacio was quite capable of that himself, too. But Aguinaldo would not have any of it.

According to Richardson, upon learning of the of his own men, Aguinaldo would nonchalantly appear at the Naik hacienda where Bonifacio was reading out loud reports from an informant detailing Aguinaldo’s shifting loyalties. Without batting an eyelid, Aguinaldo surveyed the faces of the duplicitous men he thought were his own. Bonifacio, in response to the intrusion, told Aguinaldo to “come and sit, listen to our reports,” to which Aguinaldo responded with “If I were needed here, you would have invited me.” With that, he left the room, leaving everyone stunned.

This bold act by Aguinaldo persuaded Pio del Pilar and Mariano Noriel to butterfly back to Aguinaldo’s camp. As proof of their loyalty, Aguinaldo made del Pilar to testify against Bonifacio in his bogus trial, while would pass judgment on Bonifacio, finding him guilty of treason.

The extremely important historical document, Acta de Tejeros, is made up of four sheets of linen parchment paper with eight pages. It will go under the gavel for a starting price of P1,000,000. This document is the catalyst that sent Bonifacio to his early grave in the hands of Aguinaldo’s men. 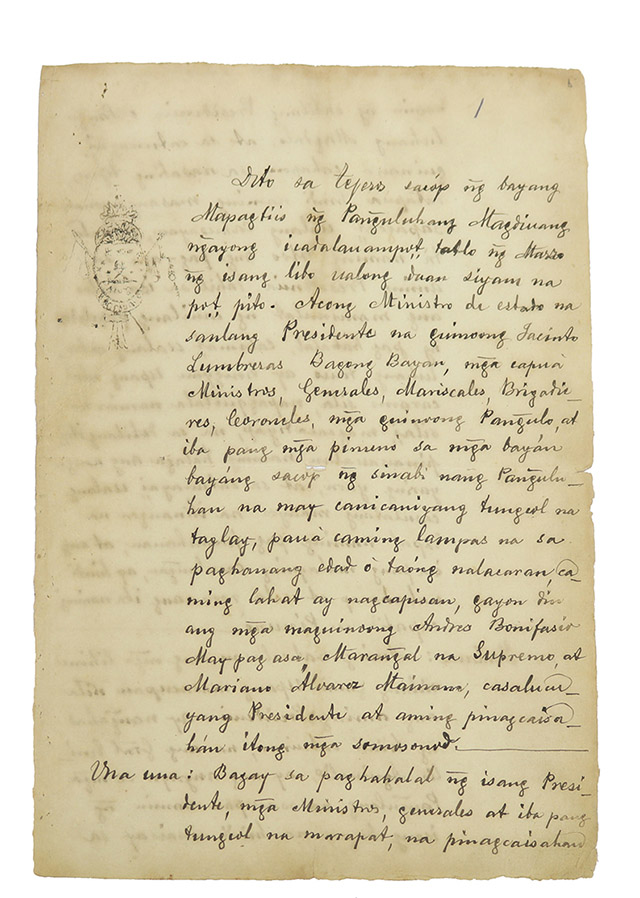 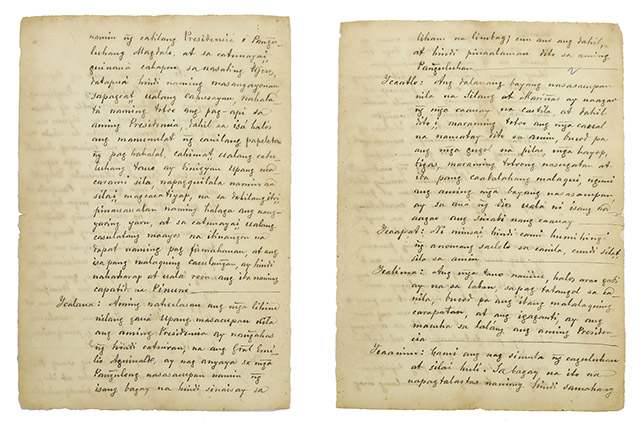 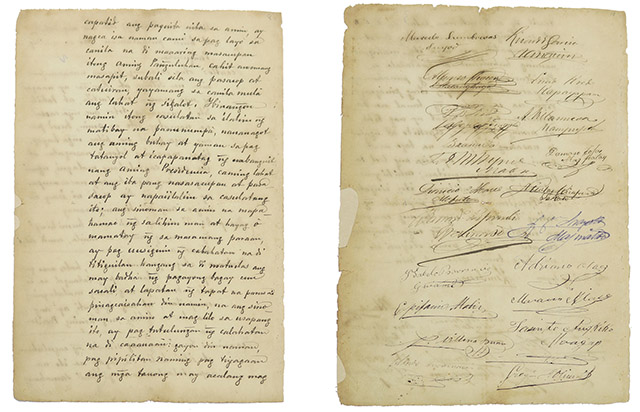 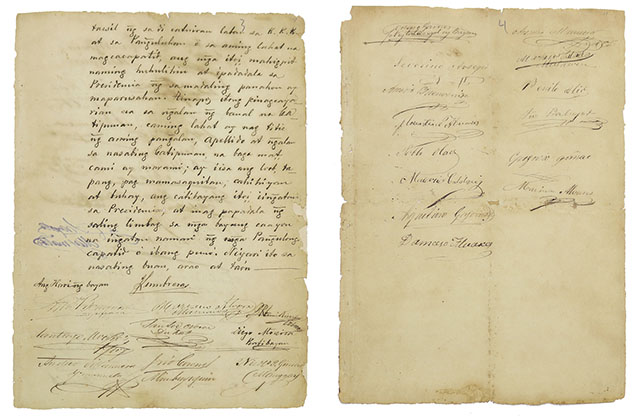 The equally significant Acta de Naik is made up of two sheets of linen parchment paper with four pages. It will also start at a bidding price of P1,000,000. This document surprised historians about the amount of support that Bonifacio received from men allegedly from Aguinaldo’s camp.

Both documents represent the very intense and tumultuous rivalry between the Philippines’ two most influential revolutionary leaders. Previously, these documents were kept as separate pages, but for the first time in over 100 years, they are reunited in their entirety, allowing historians to discover important events in Philippine history. 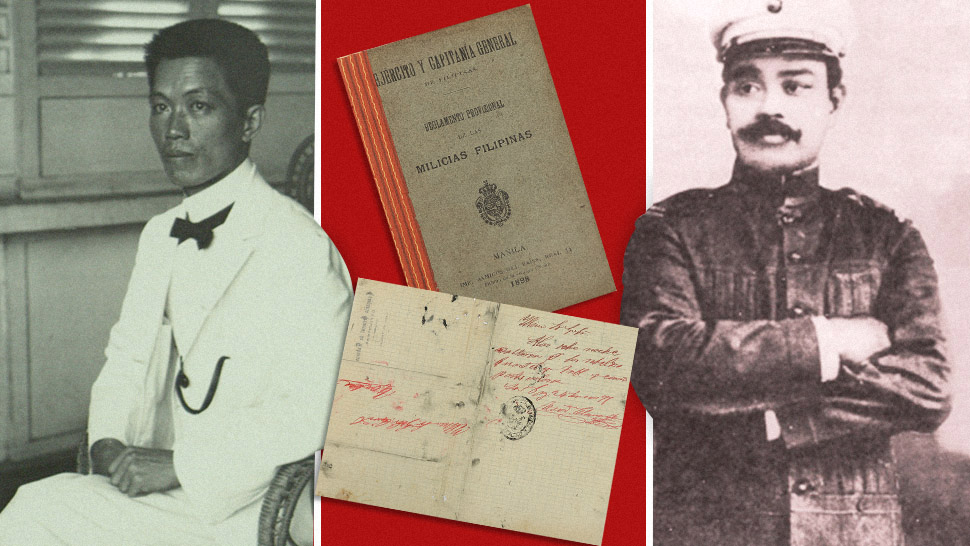