Kazunori Is Your 3-in-1, Go-To Joint for Japanese Soul Food

It is the quality of food and ingredients that sets Kazunori apart from the hundreds of other Japanese restaurants scattered around the city. 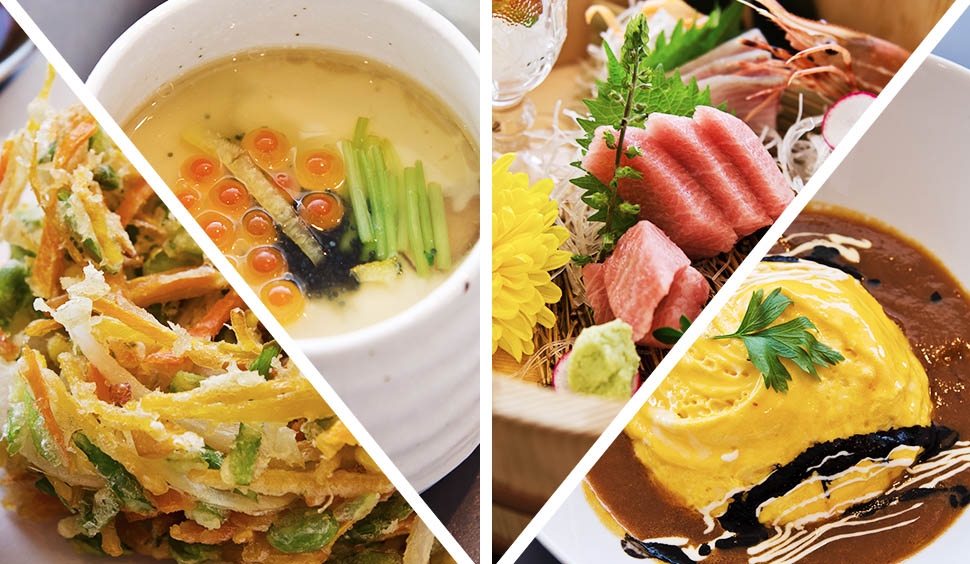 Tucked away in the midst of car horns and muddled pedestrians, along what is fast becoming the city’s most talked about food corridor, is Kazunori, a new Japanese restaurant with three distinct dining concepts. It houses a casual cafe in the front, a high-end nine-seat omakase bar in the middle, and a traditional sit-down dining room at the back that serves traditional izakaya fare.

Owned and managed by seasoned restaurateur Elbert Cuenca of Elbert’s Steak Room fame and his partners in the popular ramen joints Mendokoro and Yushoken, Kazunori brings authentic Japanese cuisine to the bustling epicenter of Metro Manila—along Chino Roces in Makati—in a neighborhood once dominated by warehouses and car showrooms. 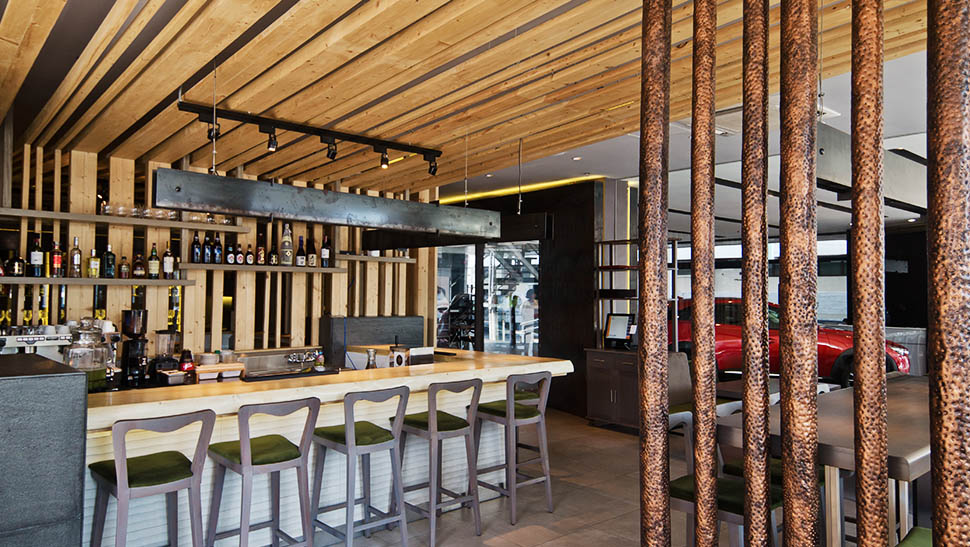 Interiors of Kazunori: It houses a casual cafe in the front, a high-end nine-seat omakase bar in the middle, and a traditional sit-down dining room at the back.

The casual atmosphere inside Kazunori makes for a simply delightful dining experience. A glass wall separates the restaurant from the adjacent Mazda showroom and during the day patrons of both establishments can cross over from space to space with ease. Its sleek industrial style interiors feature olive green and furnishings with added touches of pine wood accents. Servers are clad in chic Uniqlo uniforms and the of-the-moment, Wataru espadrilles. The cafe is brightened by an influx of natural light that fills the entry space while the intimate omakase room, partitioned by wood panels, is pleasantly dimmer and a welcome characteristic that lends to its cozy atmosphere. The izakaya's  kitchen anchors the dining space. 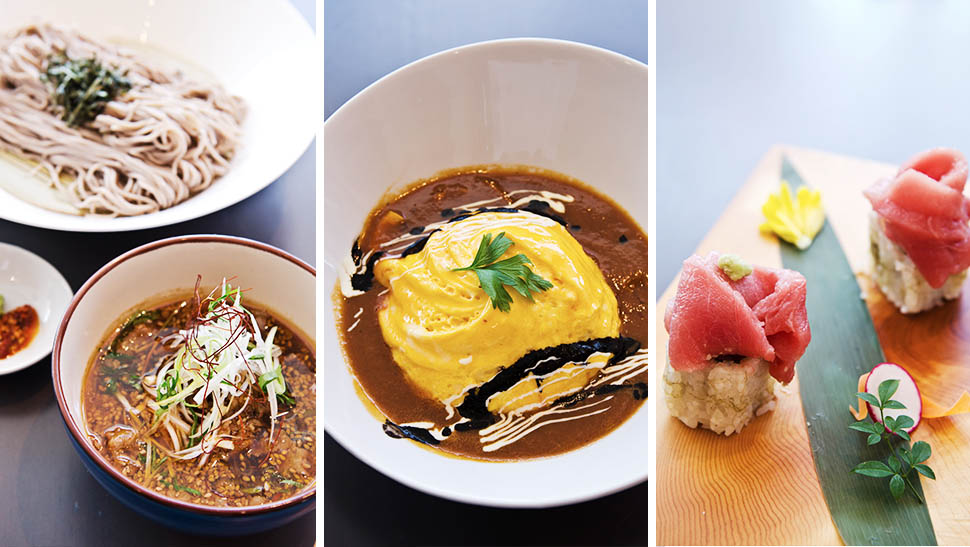 It is the quality of food and ingredients that sets Kazunori apart from the hundreds of other Japanese restaurants scattered around the city. To illustrate this point, co-proprietor Ryan Cruz shares that the market price of a single slice of sashimi that makes the cut for the off-the-menu sashimi platter is equivalent to the cost of making a single bowl of ramen at Mendokoro—scrimping on quality is never an option here.

Recently a soba master paid a visit to the establishment to assist the chefs in perfecting the soba and udon dishes by adjusting the thickness and texture of the noodles. Although the group has been making its own ramen noodles for a while, it recognized that a greater level of expertise was required to perfect the quality of the noodles. In true Japanese fashion, an artisanal expert was called in.

In addition, specialty rice is also sourced from Japan and high-grade wasabi is never premade but prepared only before it is served. Each area of Kazunori is managed by a single Japanese chef, and the three work together to keep the quality and consistency to a very high standard. The separate café and the izakaya menus can be enjoyed interchangeably, and it is only in the omakase space that a single menu is strictly adhered to. 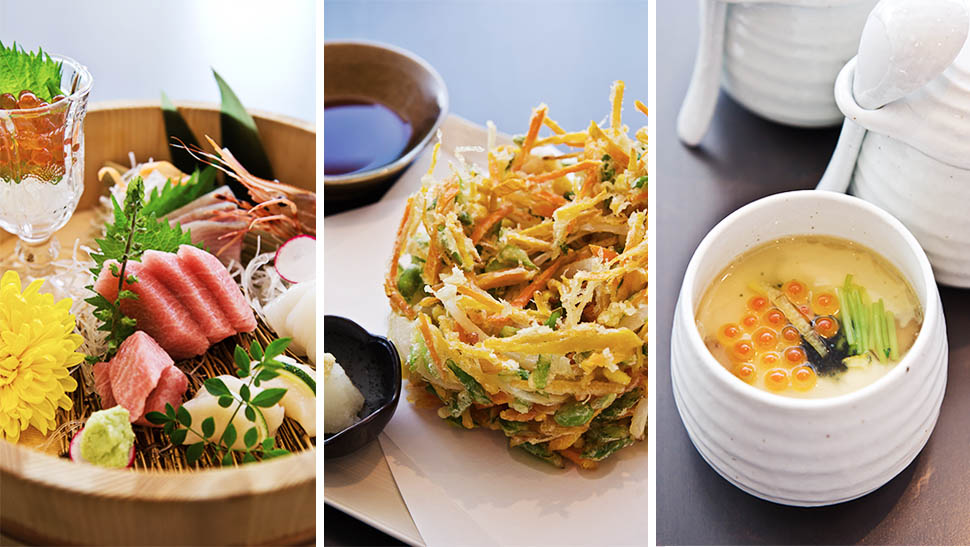 It’s often said that we eat with our eyes first. At Kazunori, the food looks just as good as it tastes and all the dishes look pretty spectacular. To start, try the crunchy vegetable and prawn kakiage that resembles a colorful bird’s nest or indulge in the , a savory egg custard with -marinated . Enjoy a burst of umami flavor in the spicy soba or savor every bite of the special seafood , a mound of fried rice covered with a fluffy omelet served with curry and a flavorful squid ink sauce. Various sushi and sashimi platters can be ordered and offerings are based on the availability of the freshest fish on-hand. Unlike many local Japanese restaurants, soy sauce is not served alongside sushi at Kazunori. Instead, sushi and sashimi are offered on their own and it is recommended to eat as served in order to properly taste the freshness of the fish and appreciate the character of the rice. All dishes are best enjoyed with a refreshing cold matcha tea or a draft Sapporo beer.

“You can’t be a jack of all trades and a master of none,” says Cuenca as he explains the importance of refining a set of dishes before expanding the Kazunori menu. on soft opening during our visit, the restaurant's menu lists only 25 to 30 percent of the dishes they plan on serving long term. Eventually, the cafe menu alone will include 20 different items including rice burgers, , and Japanese pastries and desserts--something we can all definitely look forward to.

About The Author
William Batchelor
View Other Articles From William
Get The Latest Updates From Esquire!
Subscribe to our newsletter!
Latest Feed
Load More Articles
Esquire Money 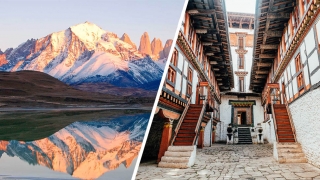 7 Travel Agencies To Call For Your Next Unforgettable Experience 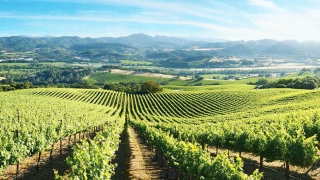