You might not be aware of it but you may be using Filipino slang that your parents may have used way back in the ‘70s. Filipino slang is a fascinating topic for any scholar of language because of its quickly and constantly evolving dynamics. Its mechanics of creating new words remain the same: adding or subtracting suffixes or prefixes, transposing syllables so words are read backward, and borrowing words from foreign languages.

But the thing with Filipino slang is its temporariness in popularity. For example, japeyks, a word used to describe counterfeit merchandise, was widely used in the ’90s but no longer used today. Japeyks comes from the word fake with an added prefix of ja. The same could be said of japorms, a word to describe someone who dresses excessively. More than a compliment, japorms is used to convey condescendence about someone’s outfit that is unfit for the hot weather in the Philippines. It comes from the word porma with an added prefix of ja. Never be caught using these two Filipino slangs nowadays or else you would be labeled as baduy, another colloquial term that means uncool, low class, or out of fashion.

The following are other words in Filipino slang that saw their popularity in the ’70s through the ’90s, some of which are still widely used today.

Resbak is Filipino slang that means retaliate or to avenge something or someone. It comes from the words wrest back, which means to forcefully retake something from someone through a violent or twisting movement. In the case of resbak, what is being taken back through retaliation is the dignity of a person who was maligned, offended, insulted, or physically harmed.

Kopong-kopong is a phrase used to denote something antiquated or an event that happened a very long time ago. You might have heard a tita or tito utter the words when reminiscing on something. The word kopong is actually an Austronesian word that means nothing, empty, or zero. Austronesian languages include almost all languages in the Philippines including Tagalog, Cebuano, Bicolano, Kapampangan, and also the languages of Indonesia and Malaysia. Hence, when you hear someone say “Nineteen kopong-kopong pa iyon,” they’re actually literally saying nineteen zero zero or ninteen hundred (1900) as a form of exaggeration.

Rarely used these days, sputing is a colloquial term used to praise someone’s attire. It was widely popular in the ’70s, but eventually faded in use. Sputing comes from the word sporting, which was frequently used in sartorial commentary: “Here comes Juan, sporting an American suit and tie.” But used in Filipino slang, sputing took on the form of an adjective that means good-looking, instead of a verb.

Epal is a derogatory term used to describe someone who likes to meddle or insert themselves into other people’s businesses. In more recent years, it has evolved to pertain to politicians placing their names and faces on tarpaulins announcing government projects. Epal comes from the word papel, which is also used as a derogatory word to describe someone who likes to take credit for something they have little to do with.

Toka is a popular word used by various generations of Filipinos whenever there are potlucks at parties, reunions, get-togethers. In Filipino slang, toka means something assigned for you to bring or take care of. You might hear someone say that the lasagna or lechon is his toka for this year’s Christmas party. Toka may have come from the Spanish word toca, whose loose translation is to handle or to manage.

Lintik is one of those vague Filipino slang words that could mean anything, but is usually used as an expression of surprise, anger, irritation, or frustration. It actually has an entry in the UP Diksiyonaryong Filipino. It means kidlat or lightning. Hence, when you hear someone say “Tinamaan ng lintik,” he is literally saying struck by lightning. For any other uses and expressions, it can generally mean damn.

For example: “Lintik! Umayos ka nga!” (“Damn it! Will you please behave!”)

Not one of the words you want to hear out loud, this Filipino slang is actually used to describe someone who acts like a jerk just to look cool. It may have been derived from the term pa-cool, which when transposed is cool-pa. Further transposition of the letter L turned it into coopal, and eventually became kupal. Unfortunately, kupal is also the Filipino biological term for smegma, the odorous sebaceous secretion in the folds of the skin in the male genitals.

It’s easy to discern where this Filipino slang came from. Pabebe comes from the term pa-baby, which means acting cute or like a baby. It is also used as an alternative word for maarte or someone who drags everyone down because of sassy attitude or diva complex.

For example: “Huwag ka ngang pabebe.” (“Stop being so sassy.”)

In Filipino slang, tukmol means ugly. However, its original meaning in the Filipino dictionary is a bird, which is a type of pigeon or kalapati but smaller in size and has brown feathers. It’s very unfortunate that the innocent bird is now associated with the vulgar colloquial term.

Tukmol is not the only animal whose name found its way in colloquial use. Gunggong is actually a type of saltwater fish (Pelates quadrilineatus) found all over the world. In Filipino slang, gunggong is a superlative form of stupid. You might have heard villains from Filipino action films from the ’80s through the ’90s shout this word to his minions.

For example: “Mga gunggong kayo!” (You are a bunch of brainless idiots!”) 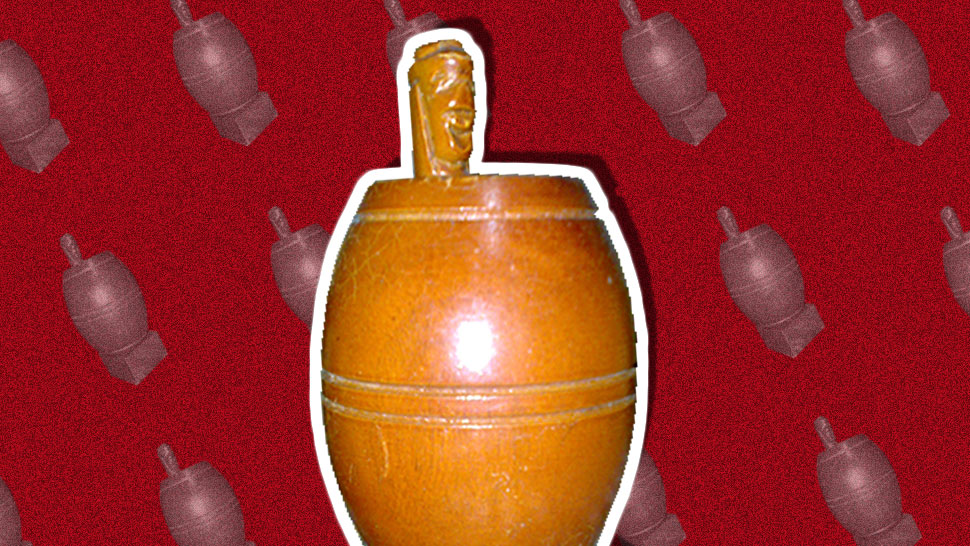 Could the Baguio Barrel Man Actually Be a Product of Westernization?