We Test-Drove the Nissan GT-R in Tagaytay. And Then Taal Erupted

A leisurely Sunday drive quickly turned into an unexpected adventure.

It started out innocently enough: you get a nice car for the weekend, you take it up to Tagaytay. I’ve done it so many times it’s practically a no-brainer. So on that Sunday afternoon, after a nice long lunch at City of Dreams, a friend and I went on what I thought would be a leisurely drive to the city in Cavite on the edge of Taal Lake.

I was behind the wheel of a Nissan GT-R, and the idea, of course, was to take the car through its paces. Sure, a couple of days driving it in the city isn’t bad, especially when it’s a gorgeous, iconic sports car, but how much can you really tell about a vehicle when you spend most of the time inching your way along EDSA in mind-numbing traffic?

And so my weekend with the GT-R commenced. First of all, it looks and sounds amazing. (When the car was delivered to my house, I instantly knew it was there before I even saw it; the gentle purr of the engine outside the gate was one-of-a-kind). When I picked my friend up, I enjoyed the look of wide-eyed disbelief on his face.

The lightest tap on the accelerator summoned power from within the car, pushing us against the seat. The GT-R can surge from zero to 100 kilometers per hour in under three seconds, and I found that to be true along SLEX when I really let the car go. I may have gone over the speed limit just a tad on the Skyway, but a car like the GT-R is meant to be driven fast.

For a much deeper dive on the car’s specs, I’ll let my colleagues from Top Gear Philippines explain it here and here.

While I’m well aware of its incredible heritage, this was my first time to actually drive it and it didn’t take long to develop a fondness for it that I don’t usually get with other cars. Fully automated adjustable seats, intuitive and one-touch infotainment system controlled by a Display Commander, and a surprising fun-to-drive experience—not at all intimidating—made the GT-R a dream.

Little did I know that dream would soon turn to something closer to a nightmare.

On hindsight, it would have benefited us if my friend and I had checked the news on Twitter or Facebook before we went up Tagaytay, but we didn’t. We finally got past light traffic along the Sta. Rosa Road and arrived on the main Tagaytay road at past 3 p.m.

We noticed people were lined up along the ridge with their mobile phones hoisted taking pictures of the volcano and the lake. That in itself wasn’t weird—it was a popular tourist destination after all—but the sheer number of people doing it was the first sign we encountered that something wasn’t quite right.

Craning our necks to look behind us, we got our first glimpse of an enormous ash cloud rising up from the crater lake. At that point, we should have started panicking, but all around us the sky remained a dazzling blue. Things couldn’t have been that bad yet, we thought. And so we pressed on and drove past the main Tagaytay road and on to Nasugbu, where my friend and I spent about an hour walking around Caleruega.

It was when we were taking photos of the car that we noticed the ash cloud getting bigger and bigger. The sky was already starting to darken, but I figured that was because dusk was settling. Still we decided it was probably best to start heading home.

Of course, by that time, we weren’t the only ones with that idea.

Traffic was starting to build up along the road headed back to Tagaytay. But we still didn’t think we were in any real danger. It likely helped that we were safely ensconced in the GT-R. The soft leather seats were comfortable and we were playing a selection of feel-good driving music.

But pretty soon, the sky became really dark and rain started to fall. Mixed with ash from the volcano, the substance became something like mud and started coating the car’s widows and windshield. We’d turn the wipers on along with some water to clear the stuff away, but it wouldn’t take long and the stuff would start blanketing the whole car again. Soon it was getting harder to see more than a few meters ahead of us.

We were in a car with a top speed of 315 kph, but admittedly, that means nothing when you’re driving away from an erupting volcano along with dozens, maybe even hundreds or thousands of other people. 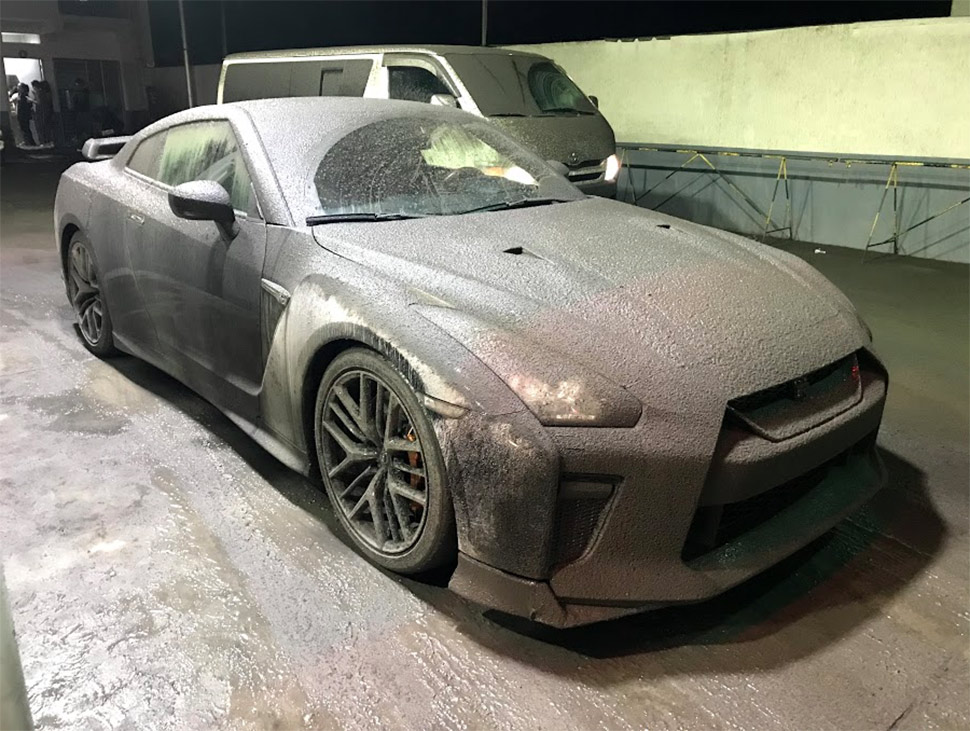 Instead of taking the Sta. Rosa-Tagaytay Road, which was bound to be even more jammed, we took an alternate route along Delos Reyes Avenue to get to Aguinaldo Highway. On a small connecting road, traffic was so bad we weren’t moving for over an hour. The ash-rain was falling so hard the roads were completely covered. The windshield was almost opaque. And to top it all off, the car’s fuel was running low. I didn't let myself imagine what would happen if the GT-R ran out of gas and we got stuck in that small road not too far from a volcano spewing ash.

The leisurely drive I had imagined had quickly turned into an unexpected adventure.

Thankfully there were people on the road who were kind enough to douse the cars with water to clear the ash paste. Incredibly, they were dong this at the risk of their own safety, and many of them wouldn’t even accept offers of payment. Humanity can be cool sometimes.

Eventually, we made it past the traffic jam and onto Aguinaldo highway, where cars were going at much slower speeds because of the heavy ashfall and the mud-ash-slick roads. A couple of gas stations we passed were closed, but the first one we saw that was open was packed with cars taking a break. We were finally able to refuel, but the station was out of water, so there wasn’t much we could do with the ash that covered the car.

Nearly five hours after we left Tagaytay, we finally made it back to Manila. The car got several stares from people along the road; one even rolled down his window to ask if I came from Taal. Immediately I took the GT-R to a car wash, where there was a long line of vehicles also covered in ash waiting for that cleanup.

To date, Taal Volcano is still rumbling and showing signs of unrest. I wouldn’t exactly call what I experienced a close call, but it was certainly one for the books. Not a lot of people can probably say they escaped an erupting volcano in a Nissan GT-R.

EVs, SUVs, and a British Sports Car: Here's What to Expect from the Auto Industry in 2020
All Photos
Comments
View As List