The Drive Up North

Esquire takes the new Ford Everest on a road trip up north. 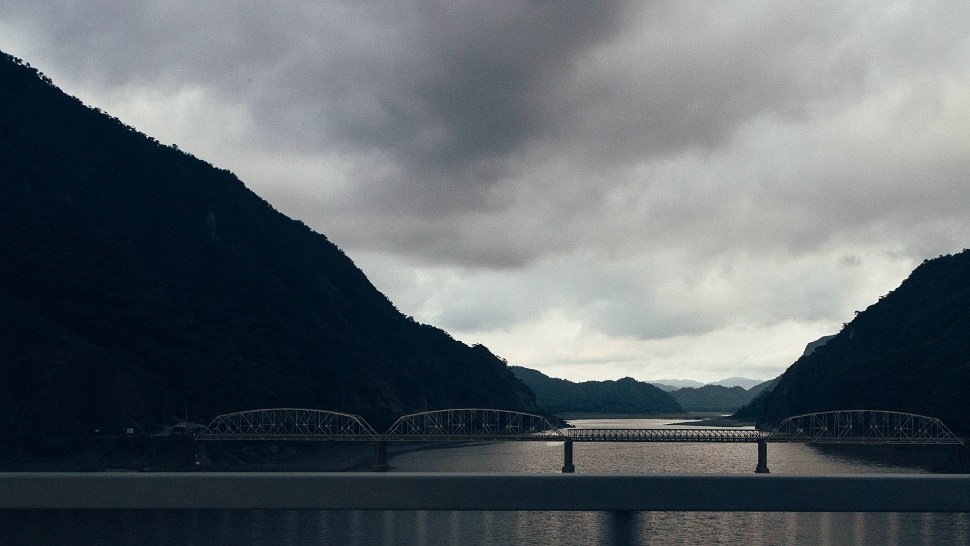 N is for narrow. The road to the north is not narrow at all. But it feels narrow, as all roads are narrow, as a straight, taut bridge to somewhere in the far distance is narrow, no matter how wide the bridge really is, as the eyes narrow, even when you’re only looking at the map and there are no complicated directions, and even when you ignore the instructions given out by the rigid voice on our devices.

You will know your way by the cardinal direction on the compass, you will be pushed by a natural propulsion, like a foreign element in a blood vessel headed straight to the head from the heart, as we are when we leave Manila at seven or eight in the morning and hit La Union, steeped in the heat of late noon.

Lunch is beautifully cooked bagnet on rice at a partially hidden restaurant called Tagpuan, just across Urbiztondo beach, which is a strip of gray sand plied by healthy waves on the back of generous swells, and fronted by surf schools and restaurants.

These days La Union is everyone’s favorite day escape from Manila. Some people have taken to calling it “Elyu,” and I suppose it’s meant to give everything a cool, jaunty feel. As expected, there is the faint sound of reggae in the air.

But Tagpuan doesn’t look out at the sea. There’s no escape from the road to the north, where tricycles sputter by and trucks hurtle past, only a brief respite. There is just a thin blade of shade; my five-year-old son instinctively takes his shirt off in the heat.

A few hundred meters ahead there’s a café called El Union, and despite ourselves, thinking of the long stretch ahead to Vigan, we drop by and suffer the Manila crowd taking portraits of their beverages. We pull away and push forward. When you’re headed far, coffee is coffee, and that’s all. 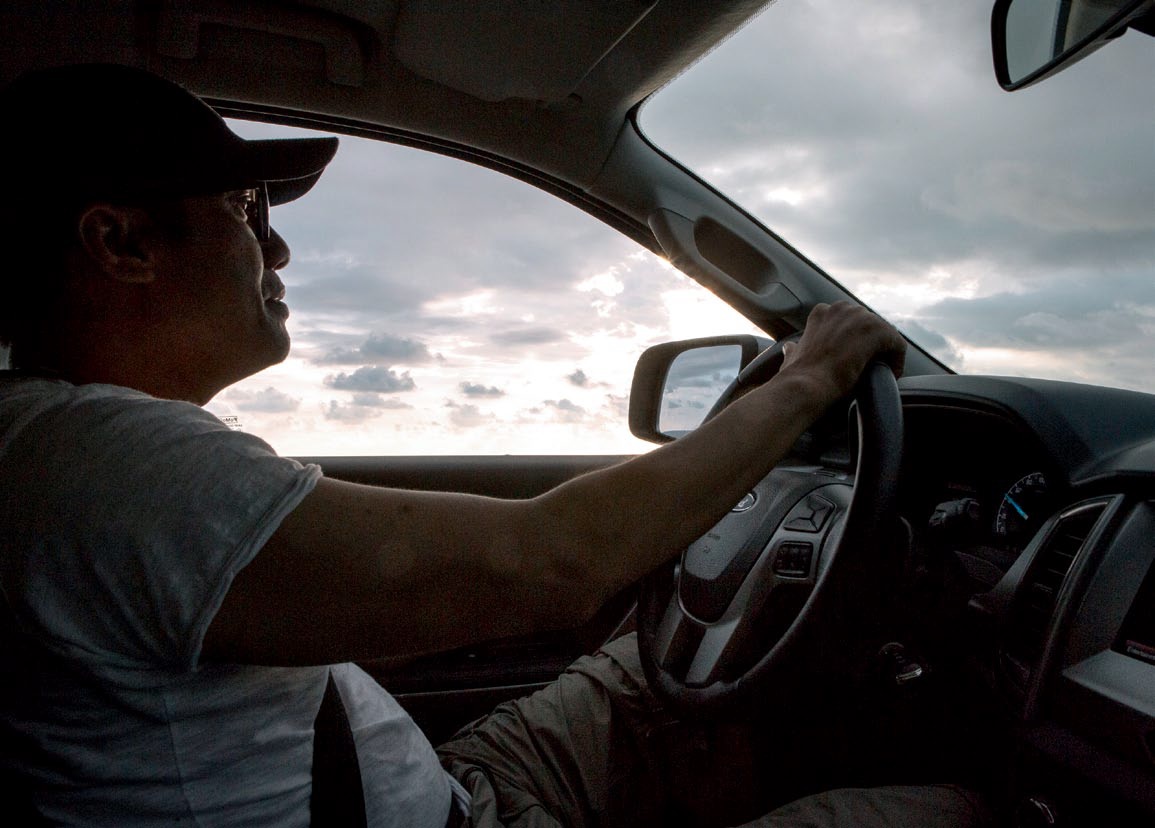 On this trip we take the new Ford Everest, a solid specimen of automotive engineering from the inside out. It feels like it’s the only sure thing we have now. My phone connects instantly with the audio system as though they were conceived in the same womb; there are none of the creaks or knocks or wiggles that are the trademark quirks of so many SUVs out there; and when we are in it we feel like we’re ten feet above the ground.

Which is just as well, because when we reach Vigan at six o’clock, I feel like I’m floating on memories. The last time I went there was 25 years ago; I took a public bus with college friends, none of whom I am really in touch with anymore. Those were innocent times—all the belongings I had brought fit into a tiny bag, and we sat splayed in the speeding bus in shorts with our feet up on the window ledges. No seatbelts, no money, not a care in the world, and we didn’t take pictures of our food or ourselves—all that survives of that journey is one pale photo of two beautiful college girls whose names escape me right now.

Today, Vigan’s central district looks professionally revived and restored. Twenty-five years later, the place seems to have gone back into itself by 250 years. The cobblestoned promenades are lined with souvenir shops, historical markers, and restaurants promising delicacies straight from the colonial era. Only calesas and pedestrians are allowed on Calle Crisologo, the town’s main drag, and the shops are in orderly array and the landmarks properly labeled and memorized by its citizens.

We take our son on a calesa ride—mostly because its fender is painted, in large, colorful letters, with my name, and I’ve taken it as a sign of warm welcome—and the calesa driver dutifully points out each hallowed place in proper historical order.

Our fingers and our phones glistening with savory patina from our dinner of traditional empanadas, we head back to the SUV. There’s still Laoag, two or three hours away farther north, but Vigan has somehow suspended our disbelief and distorted our sense of reality. Despite the selfie sticks and the chain restaurants, the city’s panoramic quaintness goes above and beyond the visitor’s eye level, beyond what we know, or what we think we know, to be our distant history: here, it is realized and idealized at the same time. At this point, we are visitors in the middle of no place, in the middle of nowhere.

N is for nowhere. The ride to Laoag, the country’s northernmost city, is warmly illuminated by the Ford’s instrument cluster and the light thrown on the passengers’ faces by the screens of our devices. Outside, in the dark, with almost predictable frequency, roadworks signify a province in continuous construction and reconstruction. Soon we are greeted with grand monuments: larger than life renditions of heroes, laborers, farm animals. There’s a 130-year old tribute to the King of Spain’s lifting of the tobacco monopoly that resembles a giant cigar planted on the ground.

In the morning light, Laoag startles us with its wideness and cleanliness, its life and the abundance of its offerings: the city map at the hotel’s front desk is heavily dotted with points of interest. We visit Sarrat church, a couple of museums, and the Paoay church, and everything we see is cared for and considered. There is nothing wasted and nothing uninteresting.

On a lark we let Google Maps guide us to a barangay called Ferdinand in a town called Marcos, and it takes us to an empty field of rustling high grass—there’s nothing here. “You have arrived,” the hollow voice says in the stillness. 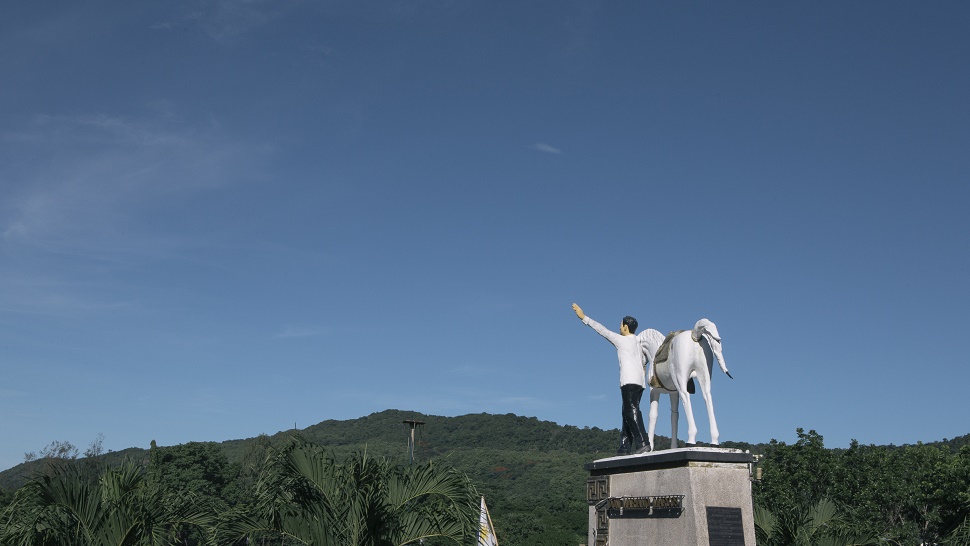 Our last stop before the airport is the “Malacañang of the North.” where the grand rooms and vistas attract flocks of visitors, mostly gazing blankly at the portraits of the Marcoses. The library and its tall shelves of books have been carefully preserved, as though ready to be reoccupied and consulted at any time. Nestled among the spines are framed images of Alexander the Great, Lakandula, and other historical figures, looking blankly back at us visitors. I want to know what they—we—are all thinking.

N is for unknown. The souvenir shop at the Malacañang of the North is manned by a middle-aged woman and another in her twenties. Among the reed fans and fridge magnets are coffee mugs and t-shirts screen-printed with images of Marcos from fifty years ago, his profile vigorous and sculptural, his expression determined and optimistic. This is a souvenir shop after all, and perhaps these are meant to be conversation pieces, not political statements. Perhaps his profile is meant to be a monument, a fact of nature, like the Spanish stones and the lifelike statues we encountered along the way. When idle talk inevitably turns, the two women, disarmingly charming and open, are quick to cite bright statistics about how much their province and their people have progressed, compared to others.

I don’t know any of these facts, but I’m quite sure they will all check out later; the shopkeepers seem educated and thorough—after all, they are proud keepers of the palace, too, and of the lands around us. I suddenly feel like I’m that college kid again, poor and quiet and blank-minded, being shown graphs and figures in a lecture room at university. 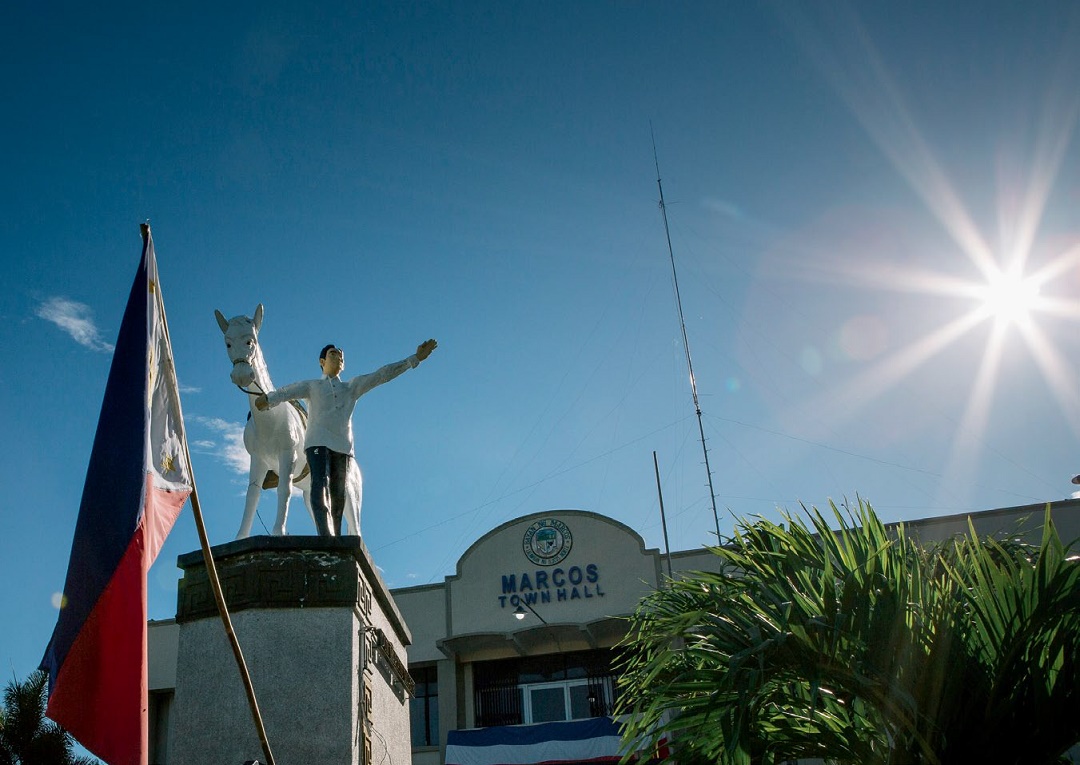 But college was 25 years ago, give or take, and now, unfortunately, the trip must be cut short by a flight home. The Ford steers us toward Laoag airport, where our party will separate before heading home. The disembodied Google Maps instructions—in the reconstituted voice of what might be a beautiful young woman—tell us to head north, turn left in 200 meters, head left, and so on and so forth, until we glimpse, the airport control tower, the last monument we will see of the North. But just as the road edges us toward it, it narrows and narrows and meanders until it becomes a street through the suburbs, and then a path behind houses, and then a trail on broken ground, and then a dead end on the wrong side of the airport. There descends on our group, for a brief moment, a cloak of unsure silence.

This piece first appeared in the August 2016 issue.