Inside North Syquia: His Chaos and Her Order Co-Exist in a Manila Apartment

An expat and a photographer learn to live in harmony in this light-drenched North Syquia unit. 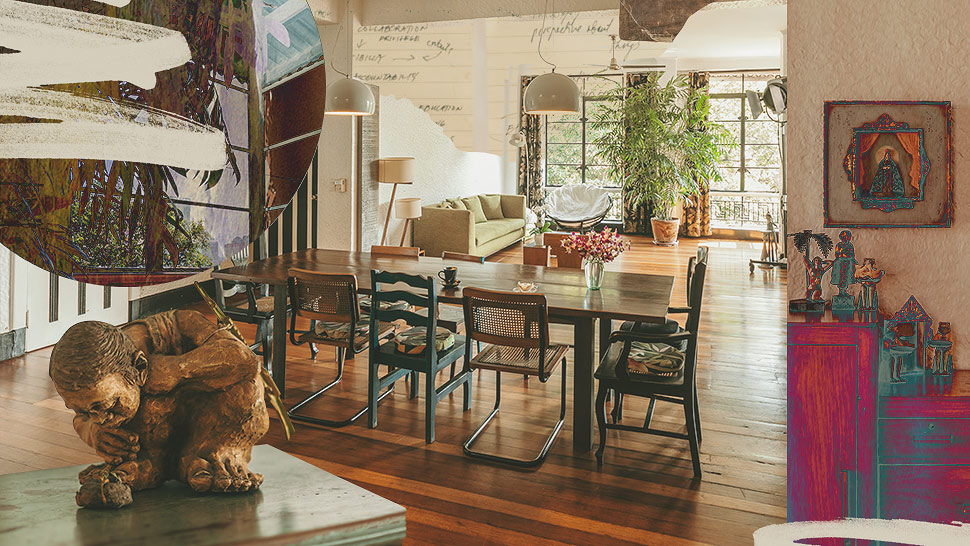 They couldn’t have been more different: One likes order and light—lots of it—while the other revels in darkness and chaos. But inside one of North Syquia’s spacious apartments, two housemates find common ground.

The housemates—a German expat working with an international NGO and a photographer/filmmaker who is also a conservationist—used to share a big house. When the former moved to North Syquia, cheekily called “NoSy” by its long-time residents, she invited her photographer friend, who easily assimilated into the building’s community.

By the main entrance of this apartment shared by an expat and a photographer, an Eng Chan piece stands next to an Ifugao pig sculpture.

“I declined at first because I had so much equipment,” the photographer says, “but when I found a storage solution, I moved in na. Here we have a lot of common friends because I used to work in Neil Oshima’s North Syquia studio during the ’90s.”

He arrived at a spic-and-span apartment, decorated in the pragmatic yet tasteful style of its German mistress. “She likes morning light,” the photographer explains. “Ako, baliktad. That’s why my room is a cave. Also, my room is a raging mess compared to the rest of the apartment. That’s why you won’t get to see it. Haha!”

Dinners are hosted on a long table—copied from a Philippe Girardeau piece—surrounded by mismatched chairs. The black-and-white image is by the photographer.

His housemate created a welcoming atmosphere perfect for casual gatherings. She likes to host dinners on a long table (copied from a Philippe Girardeau piece) surrounded by mismatched chairs. “They’re owned separately by both of us,” explains the photographer, “but there’s also the blue chair, which is borrowed from North Syquia’s back terrace.”

An enormous potted plant, christened “The Palm” by the tenants, draws visitors to the sparsely decorated living area, the venue for film screenings. The expat’s cozy sofa, upholstered in a shade of green to go with the draperies, is accompanied by an inviting lounge chair. “We have different viewing preferences,” the photographer says, “but we like to share some series. The last thing we watched was Babylon Berlin, which is excellent.”

Morning light graces the unit’s living area. The sofa belongs to the German expat, reupholstered in a shade of green to match the draperies.

'What we most like about our unit is the view of the canopy of the Balete tree outside the window.'

The expat’s room is just as scantily decorated. A simple bed—made from wood blocks and a metal frame designed by the expat herself—evokes a monastic vibe. It is bookended by a pair of lamps, purchased from North Syquia’s previous tenants, which, when turned on at night, illuminates the space with dramatic mood lighting. Work is done on a utilitarian wooden table, while a small collection of art and crafts atop an art deco cabinet provides a decorative highlight to the room.

The simple bed conveys a monastic feel. On both sides are lamps purchased from North Syquia’s previous tenants, Markus Schmidt and Richard Danao.

On the wall, art made from junk scraps were purchased by the expat in Africa.

More Syquia: A Man Cave With A Killer View

The housemates have settled nicely into their apartment’s relaxed vibe, made even more pleasing by North Syquia’s community. “It’s a very cool bunch of people that’s closer than those in most neighborhoods and buildings,” the photographer exclaims.

It’s not without drawbacks, the photographer points out. He laments the lack of “creature comfort technologies because it’s an old building.” That includes not being insulated against the noise of the streets, “a particular irritant these days,” according to the photographer.

The expat’s work corner is decorated by a painting from her native Germany.

The expat acquired this art deco cabinet from an antique shop.

Atop it are decor and crafts purchased during her travels and from local crafts brand Chrysara.

Though the expat’s minimalist taste pervades the common areas, cues about the unit’s other tenant spill from his dark cave: On the bookshelf by the dining table, a film camera finds a discreet spot, surrounded by the expat’s books and curious culled from her travels. The photographer’s black-and-white works sentinel a door leading to a common bathroom.

Except for the noise from the street, you would think that the apartment is perfectly suited for cocooning, insulated from the troubles of the world outside. But it isn’t so, according to the photographer: “With NoSy’s location, one has no choice but be witness to more of the harsh truths than in, say, a gated community.”

On a shelf, the photographer’s film camera mingles with the expat’s books and curious culled from her extensive travels. The mismatched chairs are from both housemates.

To the rigid arrangement of the common areas, he introduced a reminder of those truths: Against a wall, a traditional ventanilla (or air vent carved from wood) hangs above a painted vintage cabinet—“thrift yard finds,” says the photographer. They form a subliminal frame, drawing the eye to a sculpture that demands close examination.

“It’s from Negros, by artist Susanito Sarnate. A poor boy looking at a seedling sprout from shit. Very provincial, and hopeful. Like me.”

The vintage cabinet and ventanilla, sourced from thrift yards, are accompanied by a sculpture by Susanito Sarnate.

'The sculpture is mine. It’s from Negros, made by Susanito Sarnate. A poor boy looking at a seedling sprout from shit. Very provincial, very hopeful. Like me,' says the photographer.

More Syquia: This Manila Apartment Is a Love Letter 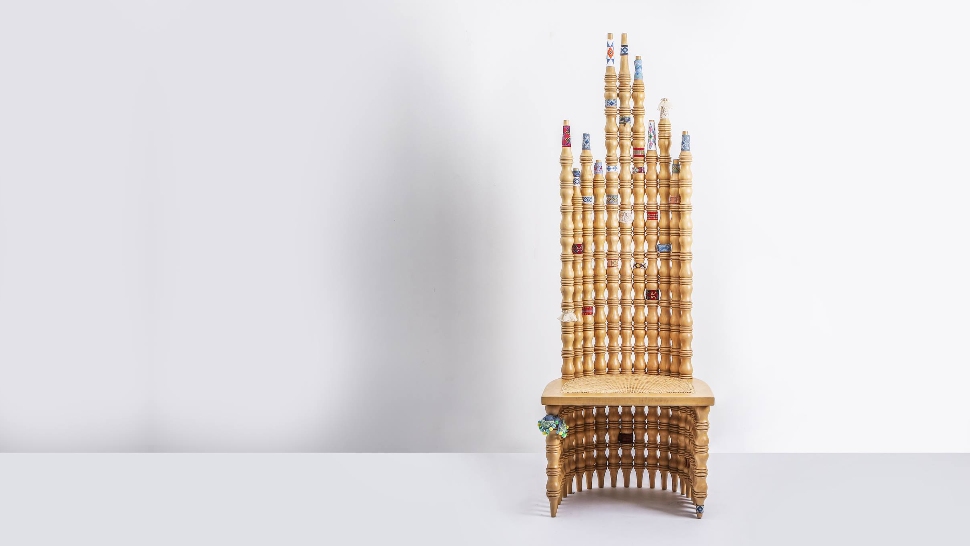 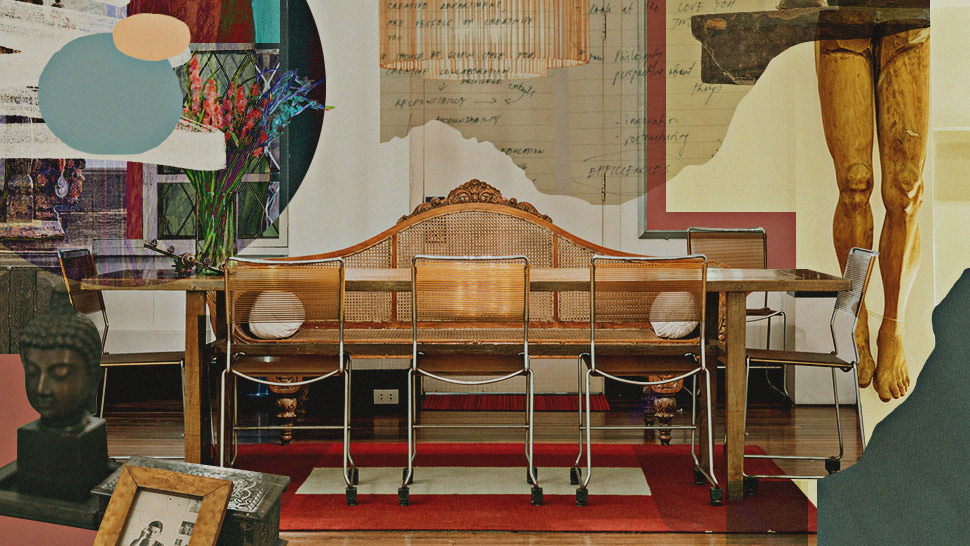 Inside North Syquia: This Manila Apartment Is A Love Letter Filled With Memories
All Photos
Comments
View As List