Old school Dad phrases have got a bad rep. But as our columnist discovers in a time of need, they can still be pretty effective

All my life I’ve winced at phrases like ‘man up’. This is because I’m bright and educated and relentlessly modern to a tee. Whenever someone tells me to man up, I always shout back "No! I refuse to conform to society’s narrow expectations of masculinity! If I want to read poetry, I will! If I want to cry at a film while eating a quiche, I will! You, sir, might be trapped in a conceptual prism of pay-per-view sport and disappointing lager, but I am free! FREE!". Admittedly, by this point they’ve usually wandered off to make honking noises at someone’s tits, but you can’t fault me for trying.

These phrases—‘man up’ and ‘be a man’ and ‘don’t be a girl’—are outdated and destructive. They equate strength with gender. They belittle emotion. They’re dismissive of vulnerability. They’re always used in a chiding, bullying way. I will never ever say them to my sons, because they refer to a brand of hyper-masculinity that is at best outmoded and at worst dangerous.

Most of the time.

Because someone recently told me to man up, and it worked.

WHAT HAPPENED NEXT WAS A MASTERCLASS IN OLD-SCHOOL DADDING

Context is probably important here. A few weeks ago, I walked 105km for charity. It took me 26 hours, and it was awful. One of the reasons why it was awful was because I did it in memory of my mum, and I was wearing a T-shirt that had the words ‘CANCER SUPPORT’ on it, and people kept coming up to me and saying “Why are you wearing a T-shirt with the words ‘CANCER SUPPORT’ on it?” and I had to reply “Oh, because my mum died,” over and over and over again for 26 hours, which can sort of get to you after a while.

About halfway around, things started to go wrong. I became hot and dehydrated and exhausted beyond comprehension, and I could feel that one of my heels had been scraped clean of skin. Every step was agony, and I told myself that I was definitely going to drop out and go home at the next checkpoint.

But I didn’t drop out, and this was because my dad was waiting for me at the checkpoint. What happened next was a textbook masterclass in old-school dadding.

He led me to the medical tent and sat me down. He found a doctor, who recoiled at the sight of my obliterated heel, and asked her to bandage me up. He held my rucksack, fetched me plasters, took me for a hot meal. And then he very carefully but very firmly told me that I wasn’t going to quit.

“The doctor would have told you if you couldn’t go on”, he said. “How are your sponsors going to feel if you drop out now?” he asked. He brought up my mum; a low blow but probably a necessary one.

And then he told me to be a man, and I didn’t have the energy to fight. On any other day, at any other time, I would have rejected the phrase. I would have written it off as regressive and stupid. I would have pointed out that walking on sore feet has got absolutely nothing to do with gender. I would have done a lot of things, but I didn’t. This time—this one time—I did what he said. 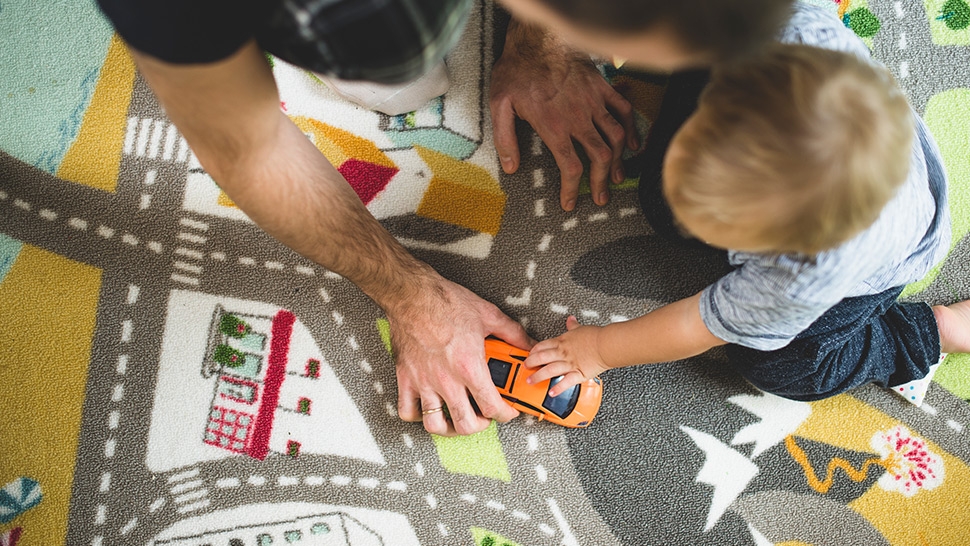 Dads, You Need to Shape Up for Your Kids

Because when I think of what it is to be a man, I automatically think of my dad. I think of how stoic and capable and dependable he’s always been. Would my dad have quit? No. The man spent 50 years bent double under peoples’ sinks and radiators, until his knees gave out and his hands cracked, and he didn’t quit. He worked 16-hour days to raise enough money to keep his family afloat, and he didn’t quit. He’s become the only grandparent that my kids have, and he puts the hours in, and he hasn’t quit yet. He wasn’t telling me to be a man. He was telling me to be more like him.

In the end I didn’t go home. Dad convinced me to carry on, and by ten o’clock the next morning it was over. He was there waiting for me at the finish line too.

It’s still not a great idea to tell someone to man up—from experience it tends to automatically make them feel inadequate and resentful—but sometimes it’s worth trying to look for the intention behind the words. My dad is a retired widower in his late sixties. He wouldn’t know what ‘woke’ meant if you tattooed it across his face. Nevertheless, in this instance he was trying to get me somewhere, and he was trying to get me there out of love. Writing off an entire generation for not keeping up with semantics is a fool’s errand. I’ll be forever grateful to him.

What Makes a Relationship Work, According to (Famous) Men Who Know
All Photos
Comments
View As List