Recipes From Noli Me Tangere

The following recipes are based on the food and ingredients mentioned by Jose Rizal in his novel, Noli Me Tangere. For reference, we used Soledad Lacson-Locsin’s English translation of Noli because it preserves the color and cadence of Rizal’s Spanish. Rizal used food in Noli as tools for social commentary, but here’s how to actually cook them.

In Noli Me Tangere, Jose Rizal used food as a tool for social commentary. He used it to emphasize the disparity between rich and poor, the powerful and the powerless, as seen in the chapter, "Souls in Anguish." Sisa picked the best vegetables from her garden (ampalaya, eggplant, and patola) and attempted to offer these to Padre Damaso in exchange for her children.

Sisa also makes a stop at the riverbank to pick the youngest pako sprouts or fiddlehead fern, which she knew was the priest’s favorite. Together, the pako, ampalaya, eggplant, and patola would have made a salad fit for a king or, in this case, a friar. We took the liberty to name this dish Sisa’s Salad. 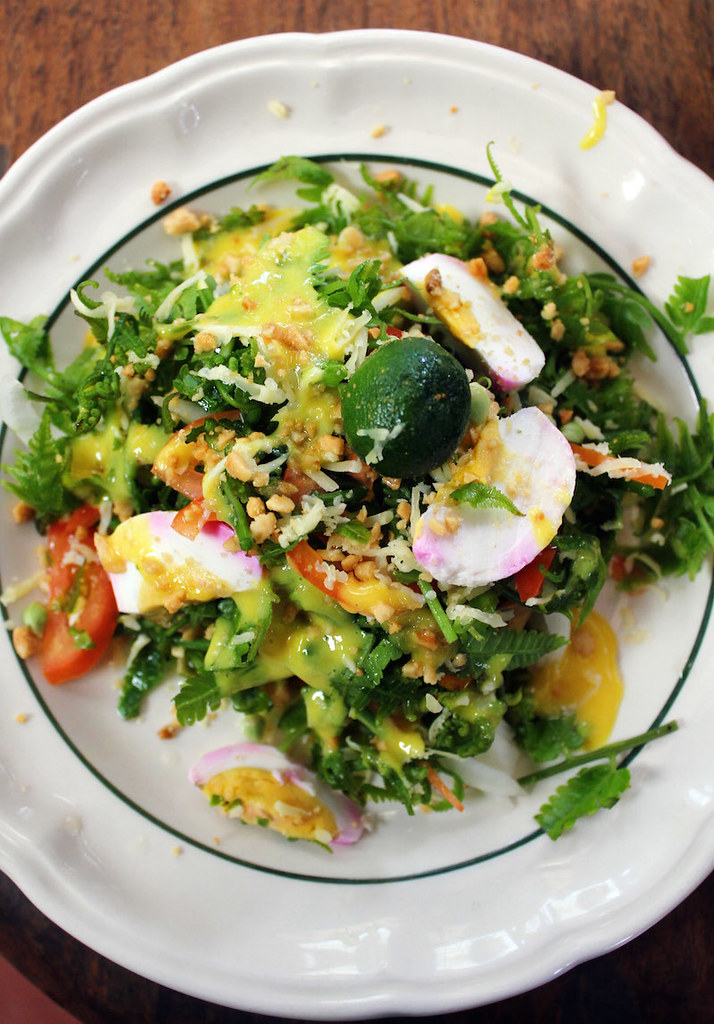 Rizal also used food in Noli to simply teach the proper way of cooking certain dishes. For example, he took particular care in elaborating how to catch, cook, and prepare sinigang na isda in the chapter, "The Fishing Excursion."

“Wait!” Tia Isabel told the son of the old boatman who was about to come up with his panalok, a bamboo rod with a net pocket. “We must have the sinigang ready so that the live fish can pass from the water to the broth.”

“Good, Tia Isabel!” exclaimed the seminarian, “She does not want the fish to be out of the water for more than a moment.”

Here, Rizal demonstrates the importance of using only the freshest catch for cooking sinigang. We call this version Sinigang ni Andeng. He further elaborates on how to do it:

Andeng, Maria Clara’s foster sister, had the reputation of being an excellent cook despite her clean and joyous mien. She prepared the rice water for stewing the fish, adding it to tomatoes and kamias… The girls cleaned up the squash vine tendrils, the snow peas, and cut the paayap into short pieces the length of cigarettes.

Rizal also makes reference to tinola in Noli’s third chapter, "The Dinner." In Soledad Lacson-Locsin’s footnote, tinola is described as “a dish of chicken stewed with white squash, upo (bottle gourd), potatoes or green papaya, often served as the first course at dinner, like soup.”

Rizal used tinola as a wrench thrown at an engine that was about to explode: Padre Damaso was served “a naked chicken neck and a tough wing floated among a plateful of squash and broth.” Neck is the least favored part of chicken because of its lack of any meat, and being served such is considered an insult.

In the chapter, Rizal used tinola to describe in detail the nuances concerning social status. For example, Ibarra was given the choicest parts of chicken that contained its liver and gizzard, while the others received breast and legs.

Padre Damaso took notice of all these things.

The Franciscan saw it all; he mashed the squash, took a little broth, let his spoon drop noisily and pushed his plate forward rudely.

At the end of the chapter, Rizal playfully mused on the insult through the eyes of a European journalist who was present at the dinner:

That night, the young blond man was writing among other things the next chapter of his Colonial Studies: “On how a chicken wing and neck in a friar’s dish of tinola can disturb the joy of a feast.”

Tinola de Damaso is an attempt to replicate the offending dish served to the fictional fat friar of Noli Me Tangere.